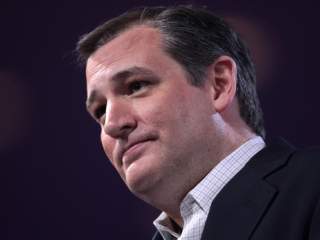 Frank Gaffney, who has been toiling in the far right anti-Muslim vineyards for over a decade, likes to refer to “creeping Sharia.” He himself is plain creepy. Now he and his staff at the Center for Security Policy appear to have crept into the Ted Cruz campaign, along with a passel of neoconservatives such as Elliott Abrams and Michael Ledeen who should know better but apparently don’t care that they are cheek by jowl with a febrile conspiracy theorist. How much lower can the neocons sink?

Only a few months ago Cruz was making derisory noises about the neocons:

That was then. Now he’s turning to them and Gaffney. The result is the rise of the conspiracons.

As Eli Lake noted today in Bloomberg, Gaffney is

“a former Reagan administration Pentagon official who has emerged as a lightning rod in the Obama era, accused by the Southern Poverty Law Center of being one of the nation's leading Islamophobes.”

For Gaffney, the presence of the neocons amounts to a reunion. He was a protégé of Richard Perle. Towards the end of the Reagan era, he resigned as deputy assistant secretary of defense in protest against the Gipper’s arms-control deals with the Soviet Union. He made the front page of the New York Times, then headed to the American Enterprise Institute.

Since then, he’s moved onto new obsessions. Among Gaffney’s accomplishments is fingering Grover Norquist, the head of Americans for Tax Justice and a member of the board of the Center for the National Interest, which publishes this Web site, as a secret and radical agent of the Muslim Brotherhood. His offense? Norquist’s wife is Palestinian-American. In Gaffney’s world that’s ample evidence of treason and perfidy toward America. There’s more. Gaffney has also targeted Suhail Khan, a former George W. Bush administration official, as a subversive, including depicting Khan’s father as a Muslim secret agent. Gaffney has been barred from the Conservative Political Action Conference for his disgraceful statements. But that hasn’t deterred him from issuing a lengthy “report”—“The Islamists’—and their Enablers—Assault on the Right”—about the traitorous activities of Norquist and Khan. And in 2009 Gaffney announced that President Obama himself is a closet Muslim, explaining that he “not only identifies with Muslims, but actually may still be one himself."

Gaffney is the kind of warped nincompoop that appeared on the fringes of the right during the Cold War. But no serious Republican presidential candidate brought on board the likes of a Herbert Romerstein, who saw a communist under every bed, onto his campaign as a main adviser. Cruz seems to see things differently.

If Cruz was seeking to burnish his bona fides as the new Joseph McCarthy of the GOP, whom he physically resembles, then he has done well. But his motley crew of advisers further tarnishes the Republican party. None of this seems to unduly concern Cruz’s new partners. They appear to see Cruz as someone who can rescue the neocon agenda. As former federal prosecutor Andrew McCarthy is quoted in a Cruz press release today,

“As President, Ted Cruz will restore a foreign policy that prioritizes our national interests, unleashes our armed forces to prevail when called upon, distinguishes vital security measures from naïve adventurism, and tells other nations it is once again a boon to be America’s friend and a serious mistake to be America’s enemy. President Cruz will lead from in front, with strength and clarity.”

“he will put an end to the tensions of the Obama years that have weakened the US-Israel alliance. He is very clearly the most pro-Israel candidate in the race today.”

The neocons bray about Obama, but their real target is Donald Trump. Trump himself attracted criticism and mockery for bragging about his great brain when queried about whom he would turn to for foreign policy advice. “I’m speaking with myself, number one, because I have a very good brain and I’ve said a lot of things," he said. The Republican front-runner added:

"I know what I’m doing and I listen to a lot of people, I talk to a lot of people and at the appropriate time I’ll tell you who the people are. But my primary consultant is myself and I have a good instinct for this stuff."

One thing seems clear: Trump’s foreign policy team—himself—is a step up from Cruz’s.