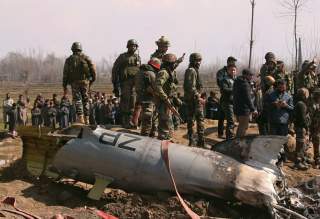 With India’s provocative abolition of the constitutional provision that guarantees Kashmir’s autonomy, tensions between India and Pakistan have once again soared to dangerous heights. This follows an intense military clash in February, which saw Indian and Pakistani planes bomb targets inside each other’s territory and over forty Indian paramilitary troopers dead following a violent ambush. While this recent escalation has not yet led to direct military conflict, the question that should be on the minds of world leaders is what would keep a conventional conflict between these two nuclear weapons states from escalating into a nuclear war?

Territorial disputes over Kashmir have led to two major Indo-Pakistani wars. The two states have maintained a fragile peace since 2003, but regularly exchange fire across the Line of Control. The most recent incident in February 2019 saw forty members of India’s paramilitary forces dead after an attack on their convoy in Pulwama. A Pakistani militant group claimed responsibility for the attack—the deadliest in Kashmir in three decades. In retaliation, India conducted airstrikes on a terrorist training camp in Pakistani territory, who returned fire on India-controlled Kashmir a day later.

Ankit Panda, Adjunct Senior Fellow with the Federation of American Scientists, pointed out that this was the first time in history that “conventional airpower [was used] by a nuclear power against another nuclear power.” Tensions continued to rise when Pakistan shot down an Indian aircraft and captured a pilot. As a way to avoid a military confrontation, Pakistan released the pilot within days, and tensions relaxed.

But things could have easily been much worse.

Following the crisis, recordings suggest that both India and Pakistan contemplated using conventional ballistic missiles against each other. This would have been a serious and unpredictable escalation. Due to lightweight decoys, cooled shrouds and other measures to prevent detection, it is nearly impossible to tell if a particular ballistic missile is armed with a nuclear warhead or conventional warhead. In a crisis where these weapons are used, leaders are more likely to launch their own nuclear weapons immediately in retaliation rather than wait to see if the enemy’s missiles result in a mushroom cloud before firing back.

While the possibility of war between two nuclear states rapidly escalated, the news cycle was focused on the Trump-Kim summit in Hanoi. Democrats’ protests against President Donald Trump’s state of emergency on the border and the Michael Cohen testimony before Congress. Aside from a few mentions on a news ticker, a violent and escalating conflict between India and Pakistan nearly slipped under the radar of the U.S. media.

India and Pakistan, whose history is marred by continuing armed conflict, are usually only mentioned in the U.S. press when something exceptionally bad happens. Meanwhile, activities in North Korea and Iran are constantly on the minds of Americans, despite the fact that Iran and North Korea present less of an existential threat to international security.

Iran does not have nuclear weapons, while North Korea only has a very small stockpile. Both nations have the international community scrutinizing their every move, and neither is actively engaged in a conflict with another nuclear armed state.

By contrast, reports have shown that even a small nuclear exchange between India and Pakistan could kill millions of people. Ira Helfand, co-chair of the Nuclear Weapons Abolition Committee at Physicians for Social Responsibility, noted that “in an India-Pakistan nuclear war scenario, more than 20 million people would be dead within one week from the explosions, firestorms and immediate effects of radiation.” Soot would raise into the atmosphere, blocking out sunlight and triggering a nuclear winter—putting 2 billion people in the developing world at risk for starvation.

India and Pakistan’s nuclear programs have slowly grown over time. Both nations have close, if quite different, relationships with the United States and its allies. Perhaps for this reason, the United States has not chosen to take a heavy-handed approach to nuclear issues in South Asia. Free from major public pressure on their nuclear activities, both India and Pakistan have expanded their fissile material production capabilities on a scale that may lead to significant increases in the size of their nuclear weapon inventories over the next decade.

Unlike India, Pakistan has refused to adopt a “no first use” policy—meaning it reserves the right to use nuclear weapons first in conflict. Pakistan has a smaller conventional military that would likely be overwhelmed by an Indian invasion. The prospect of territory loss and national collapse could be enough for Pakistan to use a nuclear weapon in an effort to level the playing field. India currently maintains a No First Use policy, but recent comments made by Indian officials in August 2019 indicate that New Delhi may be reconsidering this policy.

Adding to the complications, non-state actors seem intent on fanning the flames of war. The crisis in February was actually caused by non-state militants that triggered a state military response. The idea that terrorists could push India and Pakistan into a military conflict that could turn into a nuclear conflict is not far-fetched. Terrorists may also be interested in acquiring nuclear weapons or materials for their own purposes.

In his book, Nuclear Nightmares, Joe Cirincione documents several historical examples of non-state militants’ efforts to gain nuclear weapons and materials by staging major attacks on military bases. In 2014, four rogue naval officers and six militants disguised as marines attempted to hijack the PNS Zulfiqar, a 4,000-ton warship preparing to depart. While the plan was foiled, attacks like this one are alarming due to Pakistan’s move to arm its submarines and some of its surface ships with nuclear weapons. Had the militants hijacked the vessel, they planned to attack a U.S. Navy patrol in the Indian Ocean. Were the ship armed with a nuclear weapon, the result would have been an epic catastrophe.

Efforts to engage leaders in South Asia exist, but are lackluster. After the crisis in February, Secretary of State Mike Pompeo spoke with the Indian minister of external affairs “to emphasize our close security partnership and shared goal of maintaining peace and security in the region,” and the Pakistani foreign minister to “underscore the priority of de-escalating current tensions by avoiding military action, and the urgency of Pakistan taking meaningful action against terrorist groups operating on its soil.” President Trump has offered to mediate a dialogue between Prime Ministers Nehrandra Modi and Imran Khan, but it’s not clear that his assistance is welcome at this point.

Beyond those statements from the secretary and the president, the Trump administration does not seem to be spending a lot of time focusing on the long-term reduction of tensions in South Asia. Bureau of South and Central Asian Affairs Acting Assistant Secretary Alice Wells recently traveled to Pakistan and India to hold bilateral consultations with government officials on issues of mutual interest, but there’s a clear need for high-ranking diplomats to be focused exclusively on mitigating the risk of nuclear conflict in the region. Like Ankit Panda says “[we need to] make sure we’re not five years down the road, and we wake up to a nuclear crisis in South Asia, so really it’s something that we need to devote more attention to day in and day out.”

None of this is to say that the United States should stop focusing on regional proliferation threats from Iran and North Korea, but the threats emanating from South Asia deserve just as much effort and attention. As India and Pakistan’s nuclear arsenals grow, so do the possibilities of for “miscalculation, miscommunication or panic.” Ignoring the potential that a regional conflict in South Asia could erupt into nuclear war puts nearly two billion lives on the line.

Abby Pokraka is the Program Assistant at the Center for Arms Control and Non-Proliferation, where she focuses on regional proliferation issues.