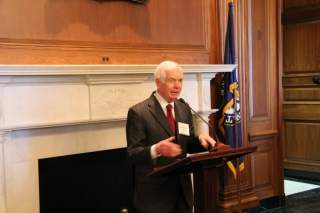 Purely from the perspective of someone who observes campaigns for a living, it is impossible to not be impressed by Thad Cochran’s sudden return from the political dead in Mississippi’s Republican Senate primary.

Here was a thirty-six-year incumbent who was not only forced into a runoff but actually received fewer votes than his conservative primary challenger. Cochran had only three weeks to turn it around. Never a particularly engaged campaigner, his comments on the trail frequently ranged from out of touch to bizarre (simply Google “Thad Cochran” and “indecent things with animals”).

Moreover, there is little precedent for the way Cochran won this race. In the runoff, turnout in Mississippi’s twenty-four counties that are at least 50 percent black was up nearly 40 percent from the first round. In the rest of the state, turnout was up just 16 percent.

In 85 percent black Jefferson County, turnout increased by 92 percent. (This is one of the things that threw off the polls, which were predicting a Cochran loss).

Cochran even managed to convince his base to turn out in even larger numbers for him despite the fact things looked grim. The extra 7,000 or so votes cast for Cochran in his Hinds County stronghold were crucial to his margin of victory.

One person, however, is very much unimpressed with Cochran’s come-from-behind victory—conservative primary challenger Chris McDaniel. “I want to be very, very clear: There is nothing dangerous or extreme about wanting to balance a budget,” he angrily told his supporters. “There is nothing dangerous or extreme about defending the Constitution or the civil liberties therein. There is nothing strange at all about standing as people of faith for a country that we built, that we believe in. But there is something a bit strange, there is something a bit unusual, about a Republican primary that’s decided by liberal Democrats.”

Sour grapes aside, McDaniel supporters can argue with some justice that Cochran’s was an individual win at the expense of the Republican brand. He portrayed his opponent as more or less a racist and a senator who wouldn’t bring home the bacon. The GOP is trying to overcome its reputation of insensitivity toward African Americans, while focusing on economic growth rather than pork.

Team McDaniel is said to be contemplating challenging the results which could be tough to do. One area they can look into is how many Cochran voters had previously cast ballots in Mississippi’s June Democratic primary, in violation of state law.

Others would like to see McDaniel run a write-in campaign, essentially pulling a Lisa Murkowski in reverse. (Murkowski was beaten by a Tea Party primary challenger but reclaimed her seat in the general election via write-in votes.)

Cochran is far from the most liberal Republican in Congress. He usually votes with conservatives on the final passage of legislation, though he sometimes tries to weaken conservative bills through the amendment process and isn’t seen as any kind of leader on size-of-government issues. But Cochran is viewed as a symbol of the Republican establishment—removed from his constituents, exhibiting a sense of entitlement to public office, far more willing to play hardball against conservative critics than the Democrats.

Meanwhile, it is clear that the National Republican Senatorial Committee and other party organs genuinely feared they would have to devote resources to the Mississippi Senate race this fall if McDaniel was the nominee. Given that they are trying to retake the Senate, putting what should be a safe seat even somewhat in play—and spending time and money that could otherwise be invested in swing states like Colorado or Iowa—was an outcome they very much hoped to avoid.

Of course, had McDaniel prevailed it might have been a self-fulfilling prophecy. Much of the material the Democrats would have used against McDaniel, from inflammatory remarks he made as a radio host to dark questions about his political associations, was lovingly gathered by the Republican establishment.

My sense is that a McDaniel write-in campaign would fail. Cochran would take a large enough slice of the Republican electorate to let Democrat Travis Childers—a successful politician who can make a somewhat plausible claim to be to the right of the national party—slip through. But after Eric Cantor’s defeat and Thad Cochran’s comeback, who can really predict anything with any certainty?