Much Ado about Nothing: Why the Saudi Succession Was Boring 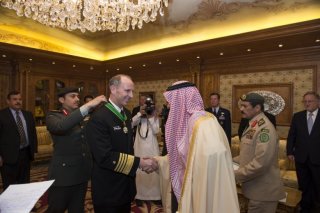 What was truly remarkable about the transfer of power following the death of Saudi Arabia’s King Abdullah on January 23 was how unremarkable it was.

After years of analysts speculating that the regime would face great difficulty in introducing the third generation of leaders—the grandsons of the country’s founder—into the succession hierarchy, King Salman issued a decree doing just that before King Abdullah’s funeral even began. With one announcement, Interior Minister Prince Muhammed bin Nayef was named deputy crown prince, representing the first grandson to be placed in the order of succession following a kingship that had passed among the founder’s sons. Meanwhile, the youngest of these sons, the former deputy Crown Prince Muqrin, was elevated to crown prince.

The speed of the announcement suggested that the choice had been planned well in advance, with Muhammed bin Nayef one of the few available choices given age and experience. His speedy appointment was likely intended to quickly and succinctly bring an end to any questions regarding the country’s stability. In addition to demonstrating that the issue of introducing the third generation was not such an issue after all, the mere fact that the country’s next two leaders have been selected reinforces the idea of future stability.

But a smooth, uneventful succession is not especially newsworthy and, judging by some of the analyses that emerged following King Abdullah’s death, some people would like to spice the story up a bit by creating drama out of thin air.

There are multiple reports, for example, alleging that King Salman suffers from dementia or other mental impairments. Yet there is little to substantiate these claims. In fact, a group of U.S. senators that met with him just before his accession, one of whom is a doctor, came away with the opposite impression. Even if the rumors are true, it is worth noting that King Abdullah effectively ruled the country prior to his own accession due to then-King Fahd’s ill health.

Many have also speculated that Muhammed bin Nayef being appointed deputy crown prince instead of Prince Mutaib bin Abdullah, the recently deceased king’s son and minister of the National Guard, was an attempt by King Salman to marginalize King Abdullah’s familial line.

Unfortunately, the more likely explanations for why Nayef was chosen are far more mundane. The first one is age. At 55 years old, Muhammed bin Nayef will already be in his 70s when he assumes the throne should King Salman and Crown Prince Muqrin live anywhere near as long as King Abdullah. And yet he is still younger than Prince Mutaib, who is already 62.

The choice of bin Nayef is also a continuation of the Monarchy's pattern of alternating between selecting kings from the “Sudairi Seven,” the group of seven sons of the founder that are full brothers, and selecting kings from outside the faction. Thus, the fourth (Khalid) and sixth (Abdullah) kings, as well as the current crown prince and likely eighth king (Muqrin), are not members of the Sudairi Seven. Conversely, the fifth (Fahd) and seventh (the current King Salman) kings are (along with the former Crown Princes Sultan and Nayef, the latter of which is the father of the current deputy crown prince). However, it can also be argued that, at this point, the children of the Sudairi Seven represent their own distinct familial lines and, as a result, their promotions would not necessarily represent attempts to boost the power of one unified group.

Furthermore, contrary to some claims, it is hardly remarkable that King Salman promoted his son to be defense minister (a position Salman himself used to hold) in order to maintain his monopoly of power over the defense ministry. Indeed, King Abdullah was the former head of what became the Ministry of National Guard, which is, as previously noted, now headed by his son. Similarly, deputy Crown Prince Muhammed bin Nayef is also the Interior Minister, his father’s former position.

Moreover, despite the fact that Crown Prince Muqrin’s mother was a concubine, the oath of allegiance is not trivial. Thus, any arguments about him being sidelined or pushed out should be taken within this context, noting that he received such pledges upon his appointment as deputy crown prince and again when he was elevated to crown prince.

So what is noteworthy about the succession? Aside from the untroubled introduction of the third generation, the most notable aspect of the succession process was the lack of clarity regarding the Allegiance Council’s role in the appointment of the deputy crown prince. This institution, established in 2006 to assist in the selection of the crown prince, allows for the submission of one, two, or three candidates, who are then voted on by the Council’s members, comprised of one representative from each line of the Al-Saud family. If the nominees are rejected, “it will name a crown prince whom it considers suitable.” In practice, however, the Allegiance Council has served more as a method of demonstrating its—and, therefore, the royal family’s—support for the one option presented rather than assisting in the choice itself.

At the same time, it is unlikely that its approval, if it hasn’t already been provided, won’t be forthcoming for the current deputy crown prince. Along with Muhammed bin Nayef’s experience, there is substantial importance placed on demonstrating consensus within the royal family.

In addition, despite the current deputy crown prince’s relative youth, the introduction of the third generation has not resolved the issue of aging leadership. Should a future King Muqrin live until the age of 90, Muhammed bin Nayef would be 76 when he assumed power, younger than the current king by only three years. The appointment of 35-year-old Muhammed bin Salman to the Defense Ministry, however, may be an attempt to introduce more youthful members of the royal family to positions that serve as pathways to the throne.

And so, with King Salman announcing his intention to continue on the path of his predecessors, what was really newsworthy was the fact that it wasn’t so notable at all.

Miriam Goldman is a senior intelligence analyst specializing in Gulf affairs at MAX Security Solutions, a geopolitical risk consulting firm based in the Middle East. You can follow her on Twitter at @Miriam411.