A Mutiny Amid the Republican Party? 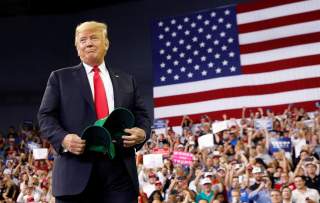 One man does not a revolution make, even when that man is the president of the United States. Donald Trump has shaken up Washington as no one else has in living memory. But within his own administration, he faces stiff resistance. An anonymous op-ed in the New York Times by a “senior administration official” a few days ago was one more sign of that. The bigger problem for Trump may not be disloyalty the disloyalty of certain executive branch officials—as serious as that certainly is—so much as the fact that there seem to be too few qualified loyalists to fill the administration. This is why the op-ed’s author has his job, and it’s why he assumes in his New York Times item that if only Trump can be hemmed in personally, the old Republican agenda of free trade and a hawkish internationalism can prevail.

But the resistance is futile. Donald Trump may not be able to transform Washington, DC and the GOP alike by sheer force of will, but he doesn’t have to. His presidency is an effect of a change as much as its cause: Donald Trump is what you get when the ideology of the Republican elite loses hold on the minds and hearts of the party’s members. If Trump fails, sabotaged by his own staff, that will not magically make the Republicans of yesteryear popular with their own people again. There’s no going back to the future of Jeb Bush or George P. Bush, of Mitt Romney or Marco Rubio.

The op-ed is part of a strategy. “Never Trump” Republicans are setting themselves up to claim victory when the Trump GOP loses control of the House of Representatives later this year, a turn that looks almost inevitable. Barack Obama also lost the House in his first midterms, as did Bill Clinton, so it’s hard to see how heavy GOP losses this year can be ascribed simply to Trump: the president’s party takes a heavy hit in midterms regardless of who the president is. If Obama’s midterm rebukes didn’t mark him out as a catastrophe in the minds of the press, there won’t be any justification for saying that major losses count more heavily against Trump. But that’s exactly what the mainstream press, with its center-left tilt, will say, and it’s what Never Trump Republicans in the media—and apparently in the president’s own administration—will say, too. With the narrative reinforced on both sides, it will probably be believed, at least by the pundits and political hacks themselves.

But it won’t matter because the practical effect of shrinking the Republican Party will be to accelerate the change within it. The same thing happened after the GOP’s crushing defeats at the tail end of the George W. Bush years in 2006 and 2008. Far from emerging chastened and more moderate, as a party once against styling its conservatism as “compassionate” and chasing soccer moms, the GOP that rose from the ashes of the Bush debacle was one in which the House Freedom Caucus was stronger than ever. The party was more populist and aggressively right-wing, as seen first in the Tea Party and then in Trump campaign. Even Mitt Romney found himself on the campaign trail in 2012 talking about “self-deportation” and taking a surprisingly hard line—much harder than George W. Bush’s—on immigration. But Romney was a retrofit: he may have been able to win the Republican nomination, but he didn’t energize the right the way Trump would four years later. He was the ghost of Republicans past struggling to fit into the future.

A smaller Republican Party is going to be a party with fewer Jeff Flakes and Bob Corkers, not more. And the ones who are left will have fewer allies with whom they can huddle against the right. But wait—although most Never Trump Republicans sound rather soft in contrast to the combativeness of Trump’s populists, the Never Trumpers themselves insist that they are the “true conservatives” or the real right-wingers. Won’t a smaller GOP be a more ideologically orthodox one, which will redound to the benefit of the “true” conservatives?

The Republican resistance is wrong to think so, because as far as the party’s base is concerned, there is nothing conservative or right-wing in the least about global trade agreements, liberalized immigration policies, and nation-building abroad. The Never Trump “resistance” has bought into myths of its own devising, and it not only has failed to learn the lessons of 2016, it has profoundly misunderstood the lessons of the early George W. Bush years. Already in 2000, “compassionate conservatism” was something of a dud: it failed to turn out enough of the right that November to give George W. Bush a clean win over Al Gore. Bush had prevailed in the Republican primaries that year not because compassionate conservatism sounded like a “true conservatism” to right-leaning voters, but because the only viable alternative was John McCain, who had staked out a position further to the left. When Bush’s GOP subsequently defied history and gained seats in the 2002 midterms, and when Bush himself was re-elected in 2004, the Bush wing of the party assumed this was a vindication of its version of conservatism. But it wasn’t: the base never bought it, not outside of the conditions created by 9/11, and in 2005 Bush faced a revolt from the right over his attempt to push a guest-worker program. Immigration was already a problem for what would become the anti-Trump wing of the party a dozen years ago.

And since then, what’s happened? We’ve seen the failure of the soft right’s economic program with the Great Recession, and the internationalist right’s foreign policy has been repudiated at the ballot box time and again: in 2006, in 2008, in 2012, and in 2016, when at last a Republican won again, but it was a Republican named Donald Trump.

The ideology of the resistance is an artifact of a bygone age. It took root in the GOP at a time when the old industrial economy that had made America great in the twentieth century was still intact enough that voters did not feel threatened by free trade. Even then, it met with resistance from the Pat Buchanan wing of the party in 1992 and 1996—and less powerfully in 1999—but Republicans overall saw more promise than peril in economic globalization. Likewise with immigration, which drew some criticism from the right but did not seem so much to be a source of cultural fragmentation in an America that still had a fairly unified idea of what assimilation meant. Today that’s no longer the case. In foreign policy, meanwhile, there can be no going back to the naivete that characterized elite Republican attitudes toward democracy promotion in the 1990s. Not only has seventeen years of nation-building in Afghanistan failed even to establish basic stability that the Afghans might uphold on their own, but it’s obvious now that the future does not mean liberal democracy will inevitably take hold in Russia or China or anywhere else. Western values are exceptional and more easily endangered at home than exported elsewhere.

These are the fundamental realities of the twenty-first century, and the Republican right is wide awake to them. The attempts of the Republican resistance to sabotage the Trump administration, even if they succeed in the short term, won’t turn back the clock. If the anti-Trump wing of the GOP is to have any future at all, it will have to compete with the right on the terms of the twenty-first century, not those of the year 2000.