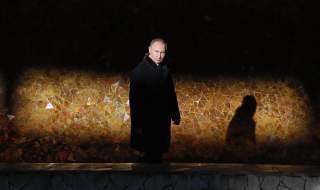 During the Cold War, the U.S.-Russian strategic relationship was partly based on the well-known concept of M.A.D.: mutually assured destruction. Both sides knew they had enough nuclear weapons to destroy not only each other, but all of humanity many times over. This knowledge deterred them from initiating an overt, direct military conflict with one another.

Today, however, the current bilateral relationship is becoming increasingly rooted in another concept that can also be abbreviated as M.A.D.: mutually assured delusion. When harbored by leaders on both sides, such mutually reinforced delusions, as one side’s expectations of the other’s pending demise, can lead the former to adopt a more assertive stance toward the latter. Other illusions, such as one state leader’s false suspicion that the leader on the other side seeks to dismantle his country, can cause that leader to misinterpret the other’s benign actions as part of a plot to dismember his own country, thereby causing him to overreact. While neither of these delusions can directly cause a conflict, some of them can, nevertheless, fuel a bilateral confrontation, increasing chances that the United States and Russia will inadvertently stumble into a devastating conflict.

In recent years U.S. policymakers and policy shapers have voiced a number of misapprehensions about Russia. Perhaps the best known of these was formulated by Barack Obama: Russia is a regional power; it does not make anything; and it is not attractive to immigrants. While these misapprehensions about Russia have been substantively challenged time and again, others endure in the minds of America’s policy-makers and shapers. Of these, two stand out because they encourage a more assertive U.S. attitude against Russia, which if reciprocated, can fuel tensions between the two countries:

1. Russia’s foreign policy is shaped by Vladimir Putin’s personal beef with the West rather than by Russia’s national interests, and if only a change of guard could be organized in the Kremlin, then the new leader would agree to toe Washington’s line. The proposition that a regime change in Russia could be the solution has been made on the editorial pages of the Wall Street Journal (see here, here and here), the Washington Post (see here) and Newsweek (see here). Hopes that Putin’s departure from power can pave the way for the ascent of a pro-Western leader are sometimes grounded in the notion that White House got along with the Kremlin when Putin’s predecessor Boris Yeltsin was in office because Yeltsin, unlike Putin, had more pro-Western views. It is true that Yeltsin developed a good rapport with Bill Clinton. However, it is also true that under Yeltsin, Russia was too weak to resist the United States on contestable issues, such as influence in post-Soviet states—which not only Russia’s first president, but even some of the most liberal Russian legislators of the 1990s described as Russia’s zone of vital interests. As one of America’s most thoughtful Russia experts Thomas Graham has noted: “Putin is not an aberration among recent Russian rulers, as he is routinely depicted to be in the West. . . . His policies toward the West are a logical evolution and, in important respects, a continuation of theirs, grounded in a similar understanding of Russia’s destiny.” Like Yeltsin, Putin—who once noted that he thinks post–Soviet Russia’s biggest mistake in relations with the West was the failure to assert its national interests early on—is inclined to put Russia’s national interests first. Unlike Yeltsin, he actually has sufficient resources to advance those interests.

When Putin thought it was in Russia’s interest to have the Taliban, which threatened the stability of Russia’s Central Asian allies, overthrown in Afghanistan, he reportedly overrode the opinion of his generals to offer intelligence to the United States in the wake of 9/11. Likewise, when he thought annexing Crimea was the only way to send an effective signal to Ukraine and NATO that Russia would not tolerate NATO in either Crimea or Ukraine as a whole, he again reportedly overruled the majority of his advisors to order the annexation. If American leaders were to share the false perception that Putin’s removal could make Russia somehow pro-American, then they would be more inclined to attempt a regime change in Russia. Putin would then not only resist such attempts, but also try to counter-attack in what could increase chances of an open conflict between the two countries.

2. Another enduring misapprehension about Russia that is harbored by leading American thinkers is that Russia is in continuing decline and could soon collapse. Those who have recently expressed this view of Russia in the twenty-first century include former Vice President Joe Biden, Stephen Kotkin of Princeton University, David Ignatius of the Washington Post, and Doug Bandow of the CATO Institute. The Washington, DC-based Jamestown Foundation has even launched a special project entitled “Russia in Decline” to give the floor to scholars and pundits supporting this view. The extreme variation of this widespread proposition is that Russia has already declined so much that it is nearing implosion or collapse, as argued by vice president of the American Foreign Policy Council Ilan Berman in his 2013 book Implosion: The End of Russia and What It Means for America and Rutgers University professor Alexander Motyl in his January 2016 article subtitled The Coming Russian Collapse. Two years after Motyl’s stark prediction, however, Russia has yet to collapse and there are no signs of impending doom. While separatist insurgency lingers in Russia’s North Caucasus, it is a far cry from the 1990s and early 2000s. Moreover, if one were to use such a mule-variable method of measuring national power as is used to gauge the rise and fall of countries like the Geometric Indicator of National Capabilities, it would show Vladimir Putin’s Russia has been rising vis-à-vis its Western competitors, including the United States, Germany, Great Britain, France and Italy in the twenty-first century. If one were to use a single-variable method of measuring that power, such as the measurement of countries’ share in global GDP, it would also show Russia rising during Vladimir Putin’s. Russia expanded its share of global GDP by 3 percent in 1999–2016 (in terms of purchasing power parity), while the United States, UK, France, Germany and Italy saw their shares of global GDP decline by 26 percent, 27 percent, 33 percent, 33 percent and 43 percent, respectively. Though uneven, this economic growth has allowed Russia to boost components of national power such as defense capabilities and effectiveness of governance. Russia has also managed to reverse a negative trend in another component of national power: Russia’s population been growing since 2009. It is true that Russia might start declining again, as it did throughout much of the 1990s, if it fails to boost the weak rates of its recent economic recovery and to prevent resumption of depopulation, but I would argue that views on countries’ power should be based foremost on established facts, not on hopes of future demise. Again, if American leaders were to believe that Russia was declining vis-à-vis America, they would be more tempted to behave assertively toward Russia, triggering a response from the Kremlin in what would also increase chances of a conflict between the two countries.

There are also plenty of misapprehensions about the United States on the Russian side, including, most recently, the notion that there is a deep state in the United States that is inherently anti-Russian and prevents Donald Trump from improving relations with Moscow. This view has been expressed by the chair of the Russian senate’s international affairs committee, Konstantin Kosachev, leading foreign-policy expert Sergei Karaganov and informal Kremlin advisor Sergei Markov. Some of the other misperceptions have been highlighted in a thought-provoking study of Russians’ opinions by Denis Volkov of Russia’s leading independent pollster, the Levada Center. According to that 2016 study, Russians believe that America is seeking to: weaken Russia’s role in the world, create obstacles to Russia’s development, “impose alien ideas and values on Russians; as well as to break up Russia into several small states” and to “establish control over Russia’s natural resources.” Some of these views are professed not only by ordinary Russians, but also by Russian leaders and, therefore, can be dangerous because they can lead to Moscow misinterpreting America’s intentions and reacting to them more forcefully (possibly with public support), thus increasing the risk of an armed conflict. Two misapprehensions stand out in that sense.

1. The United States wants to break up Russia into smaller states and establish control over Russia’s natural resources.

The secretary of Russia’s Security Council, Nikolai Patrushev, has publicly accused the United States of trying to “dismember” Russia. Patrushev also thinks the U.S. ruling elite, as represented by ex-Secretary of State Madeleine Albright, believes it is unfair that Russia has so many natural resources and that the United States “really would like it if Russia did not exist as a state at all.” “This is because we have a lot of resources and the Americans think we don’t deserve them or have rights to them; they think we don’t use them as we should. Remember the statement made by Madeleine Albright who claimed that neither the Far East nor Siberia belonged to Russia,” Patrushev once said. Unlike Patrushev, Vladimir Putin has not publicly accused the United States of seeking to “dismember” Russia, but he has repeatedly accused the U.S. government of supporting terrorist groups that seek or sought to secede from Russia. Additionally, the Russian president has said that ideas like the one attributed to Albright are “a sort of political erotica.” In reality, neither Albright nor, to my knowledge, any other U.S. official has ever made a statement that Russia should give up some of its natural resources in Siberia or the Far East. (It was reportedly Russian trolls who initially came up with the idea of attributing this mythical statement to the former U.S. diplomat.) As for breaking up Russia, while the U.S. government may have had contacts with Chechen separatists and has granted asylum to their “foreign minister” Ilyas Akhmadov, I have not been able to find plausible evidence that Washington actually supported any plans to “dismember” post–Soviet Russia. If Putin were to believe that the United States was after breaking up his country, he would then be more inclined to act preemptively, and his actions could then escalate the tensions between the two countries, increasing chances of a conflict between them.