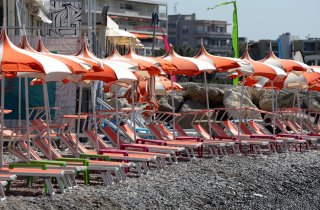 J. C. Wylie spoke truer than he knew when he divided military strategy into “sequential” and “cumulative” forms. In fact, his insight applies to all human endeavors. Sequential campaigns plod from tactical action to tactical action, one after another, until campaigners reach their ultimate goal or failure interrupts the series. The operational pattern is linear. Cumulative campaigns exhibit a scattershot pattern. Tactical actions take place all over the map, unrelated to one another in time or space. Strategic progress comes by increments as micro successes add up to macro strategic results.

Peacetime pursuits abide by Wylie’s taxonomy as well. For example, the annus horribilis that is 2020 has demonstrated that public health is a wholly cumulative effort. There is no marching sequentially to victory over disease. Even your personal reading habits display a more sequential or more cumulative character depending on your leanings. Some benighted folk read a book from cover to cover, then move on to another. They incline toward the sequential. Others dabble, keeping multiple readings going at the same time in cumulative fashion. Count me among the dabblers. Rather than recommend the most edifying summer reading of all time, here’s my directionless reading list for this most offbeat of summers.

The Expanse. The most gripping sci-fi series I’ve come across apart from canonical works from the likes of Asimov, Clarke, and Heinlein. In fact, I’m experimenting with reading, listening to, and watching the series concurrently. (An adapted version streams on Netflix.) Humanity hasn’t reached the stars yet in the Expanse universe, but spacefaring technology has advanced sufficiently for humanity to plant colonies across the solar system. This is no upbeat Star Trek universe where space exploration triggers an age of perpetual peace. Mars and Earth are waging a cold war while “the Belt,” a disparate group of colonies scattered among the asteroid belt and moons circling the gas giants, simmers with resentment toward the inner planets. A separatist Outer Planets Alliance agitates for independence, charging—with considerable justice—that the inner planets plunder the Belt for natural resources with scant regard for Belters’ well-being. The series follows the crew of the frigate Rocinante as they navigate this interplanetary struggle (and much more). So as not to divulge any spoilers, suffice it to say author James S. A. Corey is a wizard with plot twists and character development. Big questions about philosophy, the legitimacy of armed force, and modes of socioeconomic organization come up frequently.

Caesar and Livy. Sci-fi is great, but I have declared this my summer of Rome because reasons. Caesar’s accounts of the Gallic War, Roman Civil War, and other military enterprises that helped make him dictator—and precipitate his assassination on the Ides of March—are reproduced in The Landmark Julius Caesar, the latest in the classics series that gave us user-friendly editions of Herodotus’ History and Thucydides’ History of the Peloponnesian War. Caesar’s writings rank among the most durable works from the era that saw the Roman Republic perish and an empire rise from its ruins. The author comes off looking rather well in them. As Churchill quipped, history tends to be kind to major figures who write it. Nevertheless, these histories reveal much about Caesar’s way of war and statecraft and are worth reading for the dictator’s elegant, unembroidered prose alone.

Another master stylist, Titus Livy, penned a patriotic History of Rome that constitutes our sole source for broad swathes of Roman history. In his first five books—I prefer Aubrey de Sélincourt’s mellifluous translation—Livy recounts the city’s origins in the dim recesses of legend and carries the story through the Gallic sack of the city in the fourth century B.C. Ensuing books retell how Rome expanded throughout Italy and the Mediterranean basin and mounted three titanic wars against Carthage. No dry chronicle, Livy’s history is a spectacle abounding with moral lessons, gossip, and colorful personalities. This is Roman history as Romans liked to remember it.

A Scheme of Heaven. Author Alexander Boxer claims to have written a history of astrology, but it is far, far more than that. It is a history of how astronomy commingled with astronomy from remote antiquity forward as humanity gazed heavenward. Along the way we meet such fascinating figures as the Greek astronomer/astrologer Ptolemy, whose geocentric model of the universe reigned supreme for fifteen hundred years, and an elderly Caesar Augustus, who forbade private citizens to practice astrology for fear they would predict his death and disrupt the imperial succession. But beyond such historical nuggets, A Scheme of Heaven investigates how human beings process data in bulk, finding patterns and making sense of it. Stargazers of yesteryear discerned constellations in the night sky, helping them simplify and interpret what they beheld; we have masses of Big Data to contend with. Surveying the history of astrology, then, reveals something about our future while illuminating the remote past.

The Winds of War. Novelist Herman Wouk went to his reward last year after a long, reclusive life. Colleagues dubbed him an American Tolstoy, a chronicler of epic clashes through invented but thoroughly believable characters. He was also the U.S. Navy’s Tolstoy, depicting the sea service as one of two great influences on his life. The Winds of War traces the World War II experiences of Captain “Pug” Henry and his family. The scene ranges from Nazi Germany to Fascist Italy to Pacific warfare against Imperial Japan. If you know nothing about the war going in, you will have a good sense of the issues at stake and how the fighting unfolded by the time you put the book down. If you’re a World War II buff you’ll appreciate the human drama. This is historical fiction with heft and flair.

Popper Selections. If you take an interest in the philosophy of science or just want to review how to think clearly and incisively, Karl Popper is the philosopher for you. Popper is best known for contending that any theory must meet the test of “falsifiability” to qualify as scientific. In other words, a theory is never finally proved but can be disproved—and those who advance a theory have a duty to look for ways to falsify it. If they fail the theory stands—provisionally. An unfalsifiable theory, on the other hand, is an ideology; it is unscientific. These selected writings are a tonic. One can only imagine Popper’s wonderment at the state of public and academic discourse in 2020.

Loserthink. Best known as the cartoonist who created Dilbert, Scott Adams has made himself into a political commentator of considerable repute and insight. Loserthink is an often amusing romp through fallacies and biases in how we think. To avoid these pitfalls Adams urges readers to cultivate range, training themselves to view the world like an engineer, a historian, an economist, and so forth. The author hopes the term loserthink will catch on, taking its place in our everyday lexicon alongside such Orwellian terms as wrongthink and Newspeak. I doubt it will attain that lofty status—but we would reason more keenly as a society if it did.