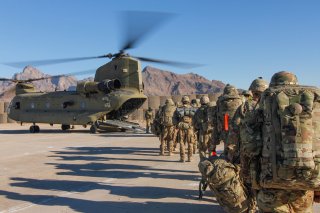 AMERICA IS addicted to war—or so goes the increasingly bipartisan indictment of U.S. statecraft in the post-Cold War era. Critics on the Left and the Right, in the academy and in Washington, argue that policymakers have reflexively resorted to force to address international problems that might be better addressed with non-military tools or simply not addressed at all. America, in this telling, has been the proverbial toddler with a hammer that sees every international crisis, every foreign challenge, as a potential nail. This militaristic approach, it is alleged, has produced a disastrous record of strategic failure in U.S. interventions; it has drained the nation’s resources and corrupted its democracy; it has entangled America in costly and counterproductive “forever wars” in the Middle East.

This critique is hardly a fringe position. Pillars of the DC establishment, such as Hillary Clinton and Robert Gates, have deplored the “overmilitarization” of U.S. foreign policy. The last three presidents have lamented America’s propensity for intervention in the Middle East and declared that the “forever wars” must end.

The United States needs a serious debate about how, where, and whether to use force in an era when its resources are stretched. It requires a highly disciplined approach to employing its military power in an age of great-power rivalry. Yet the myth of American militarism is bad analysis that leads to lousy prescription.

That myth is bad analysis in that it exaggerates America’s readiness to reach for the gun, its rate of failure in post-Cold War military conflicts, and the domestic blowback the country has experienced. It makes for lousy prescription by discouraging policymakers from doing the hard intellectual work of strategy—carefully weighing the risks of action versus inaction, determining what dangers merit a military response, assessing what costs America should pay to defend its interests—in favor of a simplistic “bring the troops home” mantra. It’s time for sharp thinking about the role of force in an unruly world—which means that it’s time to ditch the misconceptions and clichés that currently distort the public debate.

THE ARGUMENT that America is addicted to war runs basically as follows. During the Cold War, the reality of Soviet power exerted strategic discipline on U.S. foreign policy, discouraging Washington from using force promiscuously. When the Cold War ended, however, the handcuffs came off. American policymakers were intoxicated by U.S. military dominance and the dream of democratizing the world. Pentagon planners became convinced, wrongly, that a high-tech “revolution in military affairs” could allow Washington to dominate the battlefield without risking many American lives. The rise of the All-Volunteer Force insulated politicians and most citizens from the costs of war, further encouraging military adventurism.

The United States thus began to see force as a weapon of first resort rather than one of last resort. It found itself, particularly after the terrorist attacks of September 11, 2001, engaged in an ever-expanding number of military conflicts with an ever-declining rate of success. In so doing, America brought an array of ills upon itself, from strategic exhaustion to the militarization of its domestic politics. The only solution, then, is to wrap up American participation in “forever wars” in the Middle East and Afghanistan, reemphasize diplomacy and soft power, and show far greater restraint in the world. The era of “endless wars and foreign interventions” must end, Gates wrote in 2020.

This critique has become so prominent because the evidence supporting it seems, at first glance, so plentiful. From 1960–1990, the United States fought one major war (in Vietnam) and a handful of smaller, shorter conflicts in the Third World. From 1991 to 2021, America fought several relatively large wars (the Persian Gulf War of 1991, the Afghanistan and Iraq Wars after 9/11) and a host of smaller conflicts in Somalia, the Balkans, Iraq and Syria, and elsewhere in the greater Middle East. In 2011, one political scientist noted that America “has been at war for thirteen of the twenty-two years since the end of the Cold War.” Since then, the United States has continually been fighting some war, somewhere.

Many of these interventions, moreover, have taken on a seemingly perpetual character. America’s wars in Afghanistan and Iraq turned into generational struggles. As of early 2021, American special operations forces were still active in Somalia, nearly thirty years after U.S. troops first arrived to address a humanitarian crisis. And there are plenty of canonical quotes one can cite to show an apparently militaristic mindset. Secretary of State Madeleine Albright’s infamous question to Joint Chiefs of Staff chairman Colin Powell in 1993—“What’s the point of having this superb military you’re always talking about if we can’t use it?”—tops the list. Dig a little deeper, however, and the thesis of post-Cold War militarism is much weaker than it initially appears.

CONSIDER, FIRST, the claim that the post-Cold War era has seen unprecedented, hyperactive interventionism. Yes, America has fought more frequently since the Cold War than during it. But the issue is not as simple as militarism run amok.

For starters, rational cost-benefit analysis alone might have led Washington to use force more often once the Cold War ended. A more globalized, interconnected world was also a world that required more active policing. The removal of Soviet power and the collapse of communism in regions such as Eastern Europe unleashed violent demons that it ultimately fell to the sole remaining superpower to suppress. The decline of Cold War tensions, meanwhile, dramatically reduced the risks that any use of force might provoke a superpower showdown. And changes in military technology—as well as medical technology—did make it possible to use force at a far lower price in human lives: American forces have suffered fewer fatalities in all of the country’s post-1990 wars put together than they did in the single worst year of the Vietnam War.

The use of force is one method that countries use to advance their interests in a competitive world. If the costs of using force go down, as the sensitivity of the international system to instability goes up, then even a relatively prudent hegemon might find military action more attractive.

What’s more, the differences between the Cold War and the post-Cold War era are not so stark after all. The United States did, after all, fight numerous conflicts during the Cold War: Wars in Korea and Vietnam, invasions of Panama (twice) and Grenada, the occupation of the Dominican Republic, two interventions in Lebanon, an undeclared naval war against Iran, and airstrikes against Qaddafi’s Libya. The big wars of the era, Korea and Vietnam, dwarfed America’s post-Cold War conflicts in terms of the sustained intensity of the fighting and the number of U.S. lives lost. Not least, during the Cold War the United States carried out dozens of covert, semi-covert, or limited interventions that don’t always show up in the statistics: CIA-backed coups in third-world countries, proxy wars in places from Central America and Laos to Angola and Afghanistan, counterinsurgencies in El Salvador and the Philippines, and so on. (The United States still engages in certain types of these hybrid conflicts, but often more openly, as in the fight against the Lord’s Resistance Army in Central Africa.) An honest history of the Cold War makes the post-Cold War era seem much less of an aberration.

It’s not clear that the current era really represents a major break from earlier eras in American history, either. During the thirty years between 1898 and 1928, the United States fought two big wars, the Spanish-American War and World War I. It intervened in China during the Boxer Rebellion and Russia during its civil war. It fought a brutal counterinsurgency in the Philippines, intervened twice in the Mexican revolution, and occupied several countries in Central America and the Caribbean. Perhaps the truth is not that America somehow slipped the bonds of restraint after the Cold War, but that it—like many great powers—has long viewed the use of force as a critical, if often regrettable, component of its efforts to shape a world congenial to its interests and values.

A SECOND tenet of the militarism myth is that America has racked up a fearsome record of failure in recent decades because it has fought so many wars so promiscuously. In fact, the U.S. performance has not been nearly as bad as its critics claim.

The key here is understanding that America has always had a checkered history fighting limited wars because those are the wars in which it has the most trouble translating its massive power into decisive results. U.S. interventions in Haiti, the Dominican Republic, Nicaragua, and Mexico in the early twentieth century rarely left behind lasting stability. American intervention in Russia after World War I was a confused mess. During the Cold War, America achieved only a bloody, disillusioning stalemate in Korea. America’s first intervention in Lebanon, in 1958, was a comedy of errors; its second one, from 1982 to 1984, was a bloody tragedy. Vietnam was the costliest and most counterproductive limited war of all, in human and strategic terms alike.