The Myth of Indian Strategic Restraint 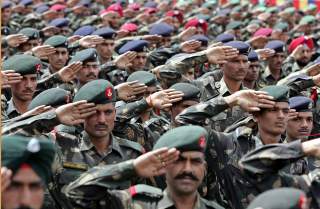 INDIA HAS emerged as a central partner in U.S. efforts to balance rising Chinese power. To this end, the United States has invested heavily in India, brokering an agreement to afford it access to nuclear materials and technology; enabling Indian acquisition of cutting-edge military and dual-use systems; and declaring India to be a “major defense partner” and “lynchpin” of its strategy in Asia. These efforts to build capacity in India leave an essential question unanswered, however: even if the United States significantly augments India’s strategic capacity, will India prove willing to contribute to U.S. balancing efforts in the region?

Conventional wisdom suggests that India is likely to disappoint the United States in the long run. Scholars and analysts have traditionally cast India as a weak strategic actor, possessing a large landmass and population and abundant natural resources, but lacking the will to effectively pursue its security interests. This view grew out of India’s history of suffering serial conquests at the hands of much smaller opponents. Great Britain had been able to colonize India with armies only a small fraction the size of the opposing Indian forces. The British attributed their success to the Indians’ supposed inferiority of character, which made them unable to resist invasion and subjugation. Pakistani leaders believed that the history of Islam in South Asia, which was characterized by small Muslim armies defeating larger indigenous forces, showed that Indians were inherently lacking in martial qualities. Mohandas K. Gandhi’s campaign to free India of the British sought to convince Indians that, despite their colonial history, they were not by nature passive subjects, but rather powerful social and political actors deserving of self-rule.

Although this faith in Indian agency was essential to the anti-colonial struggle, independent India’s founding father and first prime minister, Jawaharlal Nehru, believed that without years of significant economic growth, the country would remain unable to defend itself against a major-power adversary. Consequently, in the wake of independence, Nehru declined even to try to amass the military capabilities needed to do so, fearing that such efforts would be futile and distract India from pressing developmental priorities.

First, Indian leaders tend to pursue moralistic foreign policy goals, based more on ethical concerns than on a desire to devise security-maximizing national strategies. Second, India does not consistently defend itself, often failing to react even to direct attacks on its territory. Third, when India does defend itself, it does so half-heartedly and prosecutes wars inconclusively, resulting in returns to the status quo rather than the decisive resolution of longstanding conflicts. If these characterizations are accurate, even an India that manages to acquire the trappings of hard power will continue to be hobbled by a confluence of moralism and timidity, and likely prove to be an ineffective strategic partner for the United States.

In fact, India has been far more strategically assertive than this argument suggests. India’s alliance behavior and nuclear weapons policy, often cited as the twin pillars of its moralist stance, were primarily the product not of normative commitments, but rather of unsentimental calculations of Indian economic and security interests. In the three instances when India was attacked first by another state—the 1962 China conflict, the 1965 Indo-Pakistan War and the 1999 conflict at Kargil—it responded aggressively, launching large-scale military operations to defend itself and defeat enemy forces, at times even in the face of nuclear threats. Finally, Indian war outcomes have not all been indecisive. Rather, they have varied widely, ranging from clear victory, to restoration of the status quo, to defeat. In status-quo cases, outcomes have matched India’s prewar objectives, which sought to preserve or restore rather than to change previous territorial arrangements. And even when defeated, India has fought vigorously, if unsuccessfully, to secure its objectives.

This activist account of Indian strategic behavior belies the longstanding notion of India as a passive behemoth. And it suggests that the U.S.-India strategic partnership rests on solid ground. An India combining burgeoning military capabilities with a tradition of strategic activism can be a potent player, and an effective U.S. balancing partner, in the Asia-Pacific region.

BELIEF IN excessive Indian moralism stems, to a considerable degree, from India’s alliance behavior, which was long associated with the principle of nonalignment. This was a principle that India’s Jawaharlal Nehru had both generated and espoused. Nonalignment sought to steer India on an independent course in foreign affairs by remaining neutral in the Cold War superpower struggle and refusing to join either the U.S. or the Soviet-led power bloc.

To be sure, nonalignment did have a normative component. Nehru believed that traditional great power security competition, which had driven centuries of war and colonialism in Europe and beyond, was wasteful and unethical. He hoped that nonalignment would discourage such behavior, promoting the peaceful resolution of international disputes and reducing global economic disparities. Yet it is a mistake to believe that Nehru’s commitment to nonalignment stemmed mainly from normative concerns. Indeed, he sought to avoid alliance commitments primarily because of pragmatic calculations. Most importantly, Nehru wished to ensure that post-colonial states, having thrown off the yoke of their erstwhile masters, would truly be free to chart their own course in international politics. Therefore, Nehru wanted India to avoid the Soviet and U.S.-led power blocs, which he feared would draw India into their conflicts and rob it of its hard-won independence.

In addition, India had emerged from the detritus of British colonialism as a desperately poor country. Nehru, keen on promoting economic development and eradicating poverty, was acutely aware of the opportunity costs of defense spending. Aligning with either superpower in the titanic Cold War struggle, he feared, would invariably lead to a diversion of scarce resources to military purposes.

Nehru also worried that diverting resources to the military would raise the specter of Bonapartism in India. A powerful military, he believed, might become involved in domestic politics, threatening the independence of civilian authority. Nehru’s fears were not entirely unfounded. As Stephen P. Cohen observed in The Indian Army, prior to independence, the Indian military’s loyal service to the Raj had made British colonialism in India possible. The military’s commitment to a newly independent, democratic Indian government had not yet been demonstrated. Nehru’s misgivings were reinforced by Pakistan’s first military coup in 1958, which illustrated the dangers of military activism in a dramatic fashion. These anxieties regarding independence, economic development and praetorianism made the pursuit of nonalignment, with its associated limits on military power, a pragmatic rather than a moralistic course of action for Nehru.

Long after Nehru’s passing, his successors continued to invoke the language of nonalignment, vowing not to favor either superpower. From the early 1970s to the end of the Cold War, however, India’s behavior belied that rhetoric; India was by no means neutral in the East-West standoff. Faced with a growing threat from China and increasingly at odds with the United States, it forged a close strategic relationship with the Soviet Union. The Soviets provided India with a tacit security guarantee to protect it against the People’s Republic of China. They also supplied India with a range of high-performance weaponry at extremely favorable rates. In return, India remained within the Soviet Union’s orbit, purchasing equipment, participating in joint military education and training, and providing the Soviet Union with diplomatic support. This practice of claiming nonalignment in the East-West struggle while remaining strategically dependent on the Soviet Union continued for the remainder of the Cold War.

As the Cold War drew to a close, the Indo-Soviet security relationship lost much of its significance. Russia made clear that it would not sustain the Soviet Union’s security guarantee to India. Meanwhile, China began a process of rapid economic and military expansion, becoming even more of a potential danger to India than it had been in the past. Faced with these new structural realities, Indian foreign policy adjusted once again, pursuing a close strategic partnership with the United States, despite decades of Cold War antagonism. Both countries have made clear that this military and diplomatic cooperation, which would have been unimaginable just a few years ago, will be indispensable to them as they hedge against the dangers of rising Chinese power in the future.

The second main source of purported moralism in India’s foreign policy is the country’s approach to nuclear weapons. After independence, Prime Minister Nehru vigorously promoted universal nuclear disarmament. Nehru’s position did have an important ethical foundation, which could be traced to the thought of Mahatma Gandhi and the nonviolent principles of the Indian nationalist movement. Nehru, Gandhi’s stalwart disciple, had vehemently opposed nuclear weapons, which Gandhi labeled “the most diabolical use of science.” Both men believed that Asian countries like India could, through their longstanding moral traditions, help to reduce Western states’ reliance on nuclear deterrence and set the world on a more ethical course.