NAFTA 2.0 Is Just the Next Step of Trump's Trade Wars 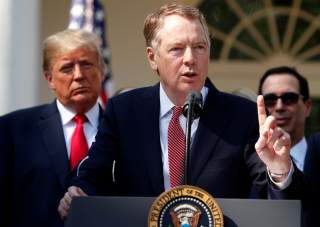 Donald Trump announced on October 1 his congratulations to Mexico and Canada for working out a trade deal with America. That agreement revises and keeps the North American Free Trade Agreement (NAFTA) that has economically bound together the United States, Mexico, and Canada since 1994. These minor revisions to NAFTA are overall good news for America and are one more step in Washington’s trade wars.

The new agreement means that most of NAFTA—along with the majority of its benefits—were kept in place with some tweaks. Also, the changes to NAFTA allow Trump to claim victory domestically. This will let him turn his sights away from steadfast U.S. allies and towards significant rule-breakers like China. With the home front secure, Washington can more readily proceed with its trade wars abroad.

For now, U.S. steel and aluminum tariffs on Canada and Mexico remain in place subject to future talks but these are likely to be resolved. Additionally, the deal increases minimum wages for Mexican auto workers and also raises the number of made-in-North America car parts required for a vehicle to be compliant with NAFTA. In exchange, both Mexico and Canada get to avoid American tariffs on automobiles for sixteen years.

However, Mexico and Canada will be forced to follow America’s copyright regulations. Furthermore, Canada will allow U.S. farmers more access to their wine and dairy markets. Also, two of NAFTA’s three original multiparty trade dispute resolution processes will remain in place (which is good for future intra-North American relations).

Finally, even the name of the agreement will potentially change from NAFTA to USMCA. On October 1, Trump tweeted “The new name will be The United States Mexico Canada Agreement.” Although this change in branding may not actually happen (the new treaty at times refers to itself as NAFTA 2018), the name matters. Trump is all about branding, declaring previous deals to be bad, and then claiming to make them better (whether he does or not). By adjusting the name, he is making the deal his own. That allows him to tell everyone he fulfilled his campaign promise to renegotiate it.

As much as Trump has come down hard on traditional allies, it was better to revise NAFTA than to withdraw from it as Trump had considered. After all, the trade agreement had spurred trilateral trade and investment to over $1 trillion. NAFTA 2.0 preserves most of the original treaty, including low tariffs. However, the deal needs Congressional approval. This could pose a problem because the vote on NAFTA 2.0 will not happen until 2019 after the 2018 midterms and a potentially Democratic—and anti-Trump—Congress is seated.

Finally, perhaps Trump’s hardball tactics weren’t the best negotiation strategy, but a deal was made, and North American relations will survive. It also appears that market and institutional uncertainty over NAFTA should now be over with.

Trump always made it clear, both as a candidate and as president, that he considers China to be a significant threat—and he is right. This is why NAFTA 2.0 includes a rule that each member has to warn each other if they’re going to negotiate a free trade agreement with a non-capitalist country. For example, this provision would readily apply to China which has a lot of subsidies, state-owned businesses, and regulations designed to tilt trade in its favor. By getting NAFTA settled and including this rule, Trump has made one more step towards creating a unified front against China.

For instance, according to an article by the Council on Foreign Relations, “China’s domestic market is rigged against fair competition in a way that is unique among the world’s biggest economies.” Aside from tariffs in violation of international rules, China’s many bad practices include forced technology transfers, cyber-theft of intellectual property, and policies designed to limit imports.

China’s rule-breaking has gone unaddressed for over a decade. Given the vast economic ties between America and China, policymakers in Washington had understandably been wary of imposing sanctions on Beijing. But a campaign of name and shame hasn’t worked, and it is time for a firmer approach. No trade war should be taken lightly, but if America is to fight one, it is better to not fight U.S. allies at the same time.

John Dale Grover is an Assistant Managing Editor at The National Interest. He is also a writer for Young Voices and a Fellow with Defense Priorities. His articles have appeared in Real Clear Defense, The American Conservative, and Fox News. Follow him on Twitter @JohnDaleGrover.