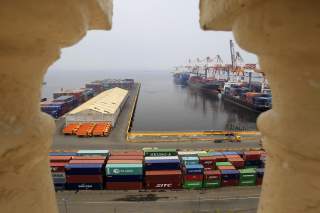 As U.S. trade negotiators debate NAFTA, even hinting at withdrawal, they should bear in mind the critical role the trade treaty plays in helping the United States compete in global trade. Indeed, the indirect benefits NAFTA provides the United States might be almost as important as the direct benefits. We can see these indirect benefits in three aspects: First, a high percentage of U.S. global exports have NAFTA inputs. Second, a high percentage of U.S. imports from NAFTA have U.S. inputs. Third, an increase in U.S. trade competitiveness induces trade collaboration around the world.

The U.S. economy not only depends on NAFTA as an export market, but it also depends on it as a source for imports. The U.S. sources almost 15 percent of the value of its exports from foreign countries and this chart breaks down that value by country of origin. The latest available data shows 14.5 percent of the foreign value in U.S. exports was sourced from Canada and 8.6 percent was from Mexico. Taken together, NAFTA partners are responsible for 23.1 percent of foreign value added in U.S. exports.

If we look at the foreign-value-added share of U.S. exports by industry in this chart, then we see a similar pattern. Out of the top seven U.S. exporting industries, the industries most dependent on NAFTA inputs are the basic metals and metal products sector, which has 8.2 percent of its export value coming from NAFTA partners, followed by the chemicals industry and the transport equipment (including motor vehicles) sector, which gets 6.5 percent and 6.2 percent of its export value from those partners.

The second indirect benefit of NAFTA is the U.S. content that is reimported from NAFTA countries into the United States. The U.S. International Trade Commission (USITC) found in a study of U.S. global value chains that there is a share of 15.7 percent and 14.7 percent of U.S. value added in U.S. manufacturing imports from Mexico and Canada. This compares to the U.S. value added in manufacturing imports from the rest of the world of 6.4 percent. Thus the United States not only sources from—but also supplies—NAFTA supply chains,

The indirect benefits of NAFTA remind us that home market competitiveness and close economic ties with neighbors are component parts of a country’s global economic performance. Both U.S. importers and exporters would suffer from new trade barriers and the decomposition of NAFTA-centered value chains. Tariffs, regulatory barriers and “Buy American” policies would suppress U.S. productivity and its international competitiveness. And this sets the tone and pace for global trade policy.

As long as the United States focuses on open markets and trade efficiencies, other countries want to be trade partners with the United States and are willing to adapt their policies and business practices to improve access to the U.S. market. Hence the four hundred million population of NAFTA and its more than 25 percent share of the world economy is a powerful tool to induce other nations to comply with U.S. requirements and global norms. By the same logic, protectionist countries do not have much to fear from a U.S. trade strategy that is occupied by degrading NAFTA. Deterioration in NAFTA would not only mean a decrease in U.S. competitiveness, but it would also mean that the United States has less reach and negotiating power around the world.

The Trump administration is right to put the spotlight on NAFTA’s imperfections and the need to update the treaty. But this is an argument to strengthen and modernize NAFTA with the view of improving both commercial openness and rules that provide a greater role for economic activity.

Frank Lavin was the U.S. Undersecretary of Commerce for International Trade, 2005–2007 and He is now the CEO of Export Now. Hanna Deringer is trade policy analyst at ECIPE, and Fredrik Erixon is the director of ECIPE. Research assistance by Julie Richert and Valentin Moreau is gratefully acknowledged.