The Nagorno-Karabakh Cease-Fire at 25 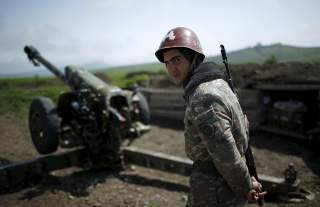 This quarter-century anniversary is a good occasion to assess the cease-fire from today’s perspective, to sum up some results in terms of what has been done and what needs to be done to strengthen the cease-fire, and to draw lessons that will be useful for enhancing the effectiveness of the peace process for the resolution of the Azerbaijan-Karabakh conflict.

The agreement is of key importance since it put an end to the war unleashed by Azerbaijan against the democratic statehood of Artsakh. It also moved the Azerbaijan-Karabakh conflict into a political and diplomatic track, and by so doing created conditions for the parties, with the assistance of international mediators, to concentrate efforts on finding ways to finally resolve the conflict through negotiations.

So far, this Agreement has been the only real achievement in the process of resolving the Azerbaijan-Karabakh conflict. The path to peace, or rather to cease-fire, turned out to be quite difficult. As an eyewitness to those events and a participant in the talks that took place during the war and the postwar years, I can say that attempts were repeatedly made in 1992–1993 to end the fighting. However, cease-fire agreements reached during this period proved short-term. The reason for these failures was that Azerbaijan, confident of its military and technical superiority, was hoping for a military solution to the conflict and used the pauses solely for a time out, in order to resume fighting again later.

It is because of this position taken by Azerbaijan, which did not want to guarantee peace and commit itself to the cessation hostilities, that the four UN Security Council resolutions on Nagorno-Karabakh, the main requirement of which was an immediate cease-fire, the cessation of all hostilities and hostile acts were thwarted. By all its actions, Baku demonstrated that it considered the UN Security Council resolutions not as a means of ending the war, but as an instrument of achieving a military and political advantage.

The first prerequisites for an indefinite cease-fire agreement appeared in 1994 only after the Artsakh Defence Army managed to repel the armed aggression of Azerbaijan, ensure the security of the republic’s borders and thereby seriously undermine Baku’s potential aimed at resolving the conflict through military force.

These positive trends were consolidated through direct negotiations, which in prior years had stalled on the issue of the status of Artsakh. Only after very sensitive losses on the battlefield and a significant weakening of its military potential, the Azerbaijani leadership, not only ceased to prevent official Stepanakert from fully participating in the negotiations, but also repeatedly initiated direct contacts with the authorities of Artsakh, including at the highest level. Removing the main obstacle to direct talks allowed the parties to concentrate on substantive issues. Thanks to these contacts, Baku and Stepanakert concluded a dozen agreements on the limitation of hostilities, and on temporary cease-fires or their extension, which ultimately paved the way for an agreement on an indefinite cease-fire and cessation of hostilities.

The basis for the current indefinite cease-fire was laid on May 5, 1994, in Bishkek, the capital of Kyrgyzstan, where, under the auspices of the CIS Inter-Parliamentary Assembly, the leaders of the parliaments of Artsakh, Azerbaijan and Armenia discussed the situation in the region, and following the negotiations, signed the Bishkek Protocol (Azerbaijan joined the document three days later, and with some reservations). It is worth noting that the Protocol was preceded by a Statement of the Council of CIS Heads of State adopted in Moscow on April 15 of that same year, in which “an immediate cease-fire, cessation of all hostilities, and its reliable consolidation” was named as the main priority and imperative of the settlement. Supporting this statement, the participants of the Bishkek meeting expressed their readiness to render all possible assistance to the efforts of the heads and representatives of the executive power to end the armed confrontation through the early conclusion of an appropriate agreement. After that, the already mentioned agreement of May 12, 1994, was signed.

On July 26–27, 1994, signing an additional agreement, all three parties confirmed the indefinite nature of the cease-fire regime until a final settlement of the conflict was reached. The parties reaffirmed this position by making special statements in August and November of the same year.

On February 6, 1995, an Agreement on Strengthening the Cease-fire reached between Artsakh, Armenia and Azerbaijan, under the auspices of the Russian-Swedish Co-Chairmanship of the OSCE Minsk Group, came into force. The agreement contained a whole set of militarily significant stabilizing measures for crisis situations with a view to consolidating the cease-fire.

In subsequent years, unfortunately, it became impossible to build on the success achieved through the agreements of May 12, 1994, and February 6, 1995. The settlement process stalled immediately after Baku returned to a policy of confrontation. As part of this policy, it first refused to comply with the provisions of the agreement of February 6, 1995. Then, in early 1997, Baku thwarted the full-fledged trilateral negotiations by trying to impose, as a basis for settlement, its nonconsensual proposals put forward during the 1996 OSCE Lisbon Summit.

In the following years, the Azerbaijani side, both in public statements and in documents distributed in international organizations, tried to reserve the right to unleash a new war against Artsakh. The manipulation of the UN Security Council resolutions adopted in 1993 forms an important part of the attempts of Azerbaijan to impose on the international community the thesis “either a settlement on Baku’s terms or war.” Although Azerbaijan itself refused to implement the requirements and calls of the UN Security Council resolutions addressed to it, years later, it stubbornly seeks to present certain provisions of those resolutions as conditions for resolving the conflict, non-implementation of which, according to the Azerbaijani authorities, allegedly gives them the right to use force. Such an interpretation directly contradicts the letter and spirit of the resolutions adopted during the period of active hostilities that aimed at putting an end to the war and starting a political dialogue.

Baku’s diplomatic manoeuvres were accompanied by real escalation along the Line of Contact between the armed forces of Artsakh and Azerbaijan. Moreover, cease-fire violations by the Azerbaijani army were becoming more threatening both in scale and duration, and the number and type of weapons used.

The culmination of this policy of confrontation was a major escalation by the Azerbaijani authorities to resolve the Azerbaijan-Karabakh conflict by force. On the night of April 2, 2016, in flagrant violation of the cease-fire agreement of May 12, 1994, Azerbaijan undertook a large-scale offensive along the entire Line of Contact, using heavy equipment, artillery and combat aircraft.

The intensity and scale of the attack, the number of forces and military equipment used, as well as statements by Azerbaijani officials clearly indicated that the April 2, 2016 aggression was not a spontaneous escalation of tension, but a carefully planned and prepared armed attack. However, after suffering heavy losses in manpower and equipment, on April 5, 2016, Azerbaijan asked through the mediation of the Russian Federation for a cessation of hostilities.

Azerbaijan’s abandonment of its commitments to maintaining peace in the region received a strong response from the international community. As a result of Azerbaijan’s attempts to unleash armed aggression against Artsakh, the co-chairing countries of the OSCE Minsk Group—the United States, Russia, France, the UN Secretary-General, the OSCE Chairperson-in-Office and Secretary-General of the Council of Europe—called for strict adherence to the May 12, 1994, cease-fire agreement and the February 6, 1995, agreement on strengthening the cease-fire. The reaction of the international community has shown that the agreements of May 12, 1994, and of February 6, 1995, are among the key elements for maintaining regional security in the South Caucasus.

In addition to its practical value, the cease-fire agreement is also important from the point of view of the accumulated experience in organizing effective negotiations. The example of the agreement of May 12, 1994, demonstrates that success in conflict resolution depends on two key conditions. First is the exclusion of any illusions about the possibility of resolving the conflict through force. It is also worth recalling that the peaceful settlement of disputes is one of the fundamental principles of international law enshrined in the UN Charter. The second condition is the organization of direct talks, in which each of the parties to a conflict conducts negotiations on its own behalf and on those issues that fall within its competence.

And today, twenty-five years later, the cease-fire agreement can serve as a guideline for enhancing the effectiveness of the peace process. On the other hand, to give impetus to the conflict resolution process, it is necessary to resume direct trilateral negotiations, and it remains important to consistently strengthen the cease-fire, including through the introduction of an international mechanism to monitor its observance.