Nagorno-Karabakh Is Ready for Another War 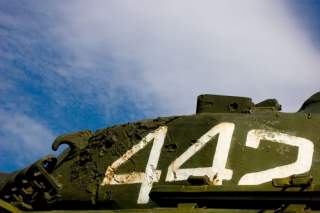 It takes a lot to surprise someone in the rogue republic of Nagorno-Karabakh.

This tiny nation’s 150,000 residents have been conditioned to expect the unexpected, caught in perpetual political limbo as citizens of a country that technically doesn’t exist, combatants in a two-decade-long conflict that rarely ever makes headlines.

And yet that’s exactly what happened here just a few months ago.

“The April war was a complete surprise for us,” Nagorno-Karabakh’s minister of foreign affairs told me the day after his unrecognized country celebrated its twenty-fifth independence day.

The holiday was a triumphant, yet somber event. The mass parade and jubilant fireworks were deeply overshadowed by the deaths of nearly one hundred soldiers five months prior, when Azerbaijan and Nagorno-Karabakh fought a full-scale, four-day battle in what is now recognized as the region’s deadliest encounter since the two states signed a ceasefire in 1994.

The magnitude of the attack, which Azerbaijan actually claims inflicted three hundred casualties on Armenians occupying land that’s belonged to them since 1924, clearly shook Nagorno-Karabakh’s leadership.

It’s a mistake that the breakaway is determined not to repeat.

While the Karabakh military is grossly outspent by its Azeri neighbors to the east, Nagorno-Karabakh and Armenia—the unrecognized nation’s economic and security patron—have made major moves to ensure Azerbaijan doesn’t catch them flat-footed again.

“We are strengthening our front line very actively, very intensively,” Artak Beglaryan, the spokesman for Nagorno-Karabakh's prime minister, told me inside his third-floor office in downtown Stepanakert in early September. “In April, we didn’t have enough cameras on the front line. Now we are installing [a] modern C4ISR system on the front line, which allows us to observe the entire line with certain depth.”

Using this new advanced system, the Nagorno-Karabakh government claims they’ll be able to “significantly decrease the chance of an Azerbaijani sudden attack, because any kind of movement in the deep territory of Azerbaijan” will be detected by short- and long-distance cameras, “giving the Karabakh army an opportunity to get prepared for strong protection and counter-attack, as well as to target their military units and equipment in advance.”

And even more, additional kinetic military power is on its way, courtesy of Mother Russia.

On September 7, Armenia’s president officially announced that Moscow had agreed to lend Yerevan $200 million to purchase upgraded military weaponry at reduced rates. The deal had been in the works for some time—long before there was any hint of an April war—but comes after months and years that Armenia has spent watching its much wealthier adversary enhance its military’s offensive capabilities.

Azerbaijan, flush with oil profits that have since almost entirely evaporated, has been boosting its military spending by record numbers, pouring billions of dollars into the purchase of Russian-made weapons. The country of some 9.5 million people spent almost $5 billion on its military in 2015 alone, including acquiring a whopping one hundred new T-90 tanks—the most advanced tank in service with the Russian Ground Forces.

The news of the $200 million arms deal comes as Nagorno-Karabakh and Azerbaijan trade fire—hundreds of rounds at a time—on a near-daily basis, constantly violating the cease-fire the two agreed to in the aftermath of April’s Four-Day War.

While Nagorno-Karabakh itself remains coy about whether the new weapons will directly benefit its own armed forces, regional experts expect the hardware will make its way at some point to the de facto independent Nagorno-Karabakh Republic.

“There is no difference between Armenia and Nagorno-Karabakh,” according to Richard Kauzlarich, who served as U.S. ambassador to Azerbaijan from 1994–97, when the war for Nagorno-Karabakh came to a head.

“There is no Nagorno-Karabakh military—it's a military force integrated with the army of Armenia . . . there’s no way an entity the size of NK can support the kind of military establishment, both in terms of size and equipment, on its own.” In other words, an Armenian arms purchase is a Karabakh arms purchase.

And it may not take long for Nagorno-Karabakh’s new surveillance system and Armenian-acquired arms to be put into service.

According to the prime minister’s spokesman, the surprise April attack was launched because of a mix of motives, both military and political. “It was the right moment, the right time, for Azerbaijan to try to use the military misbalance between the Armenian [and Karabakh] side and Azerbaijan. At that moment, Azerbaijan had received much more weaponry and Armenia had not been provided with new armament. Azerbaijan knew this and they tried to use that chance.”

That strategic imbalance remains, and reasons to exploit it are on the rise. With tensions growing in Azerbaijan following the approval of a controversial constitutional referendum that expands President Ilham Aliyev’s powers, and in the face of a rapidly declining economy, Nagorno-Karabakh seems to think another attack is looming.

If another war is coming to Nagorno-Karabakh, it “will be sooner rather than later,” Beglaryan said, “maybe before the year is over.”

It’s a feeling shared in Yerevan—at least for Tevan Poghosyan, a member of Armenia’s National Assembly and the Standing Committee on Defense, National Security and Internal Affairs.

“Unfortunately, I do anticipate that Azerbaijan will attack Artsakh again,” Poghosyan said, using a traditional Armenian name for the region. “The international community has to understand that until the political component of the conflict is not resolved, Azerbaijan will always aim for a military solution. . . . Unless this happens, I think any time when an economic or political crisis hits Azerbaijan, it will use escalation of the conflict as a tool to control the so-called ‘stability’ in Baku. Based on information available . . . October could be the time of the next attack.”

If that were to happen, it would mark two deadly encounters for Nagorno-Karabakh in the span of just nine months. It will do little to buoy the spirits of the citizens here, but it might finally remind the world that this long-ignored frozen conflict has begun to drastically heat up.

Micah Spangler is a freelance journalist based in Washington, DC. His work has appeared in CNN, The Daily Beast, VICE, Maxim, The Week, and more.