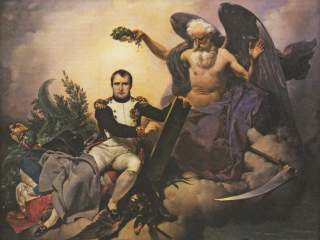 The most famous statement from Richard Nixon’s opening to China in the early 1970s emerged from an interaction between Chinese premier Zhou Enlai and Henry Kissinger. The historically minded Secretary of State asked Zhou for his views on the French Revolution. “It’s too early to tell,” replied Zhou. The answer was taken as evidence of Chinese leaders’ supposed ability to take a long-term perspective on political events and is regularly generalized to serve as a warning against swift interpretations of historical occurrences.

In fact, the diplomat who served as the interpreter for the meeting, Charles Freeman, has revealed that Zhou thought Kissinger was talking about the 1968 French uprisings, which occurred just a few years before their discussion, not the events in 1789. “I cannot explain the confusion about Zhou’s comment except in terms of the extent to which it conveniently bolstered a stereotype (as usual with all stereotypes, partly perceptive) about Chinese statesmen as far-sighted individuals who think in longer terms than their Western counterparts,” Freeman said.

But Zhou’s remarks could only be mistaken because he was thought to be speaking about the French Revolution generally. If, instead, it had been reported that he was asked his thoughts on Napoleon Bonaparte and responded with such an ambiguous perspective, few would believe it. Nobody lacks a firm opinion on the man who his soldiers affectionately nicknamed “the little corporal.” The subtitle of one of the most respected books on Napoleon, written by the Dutch scholar Pieter Geyl and translated into English in 1949, is For And Against—Geyl surveyed a century and a half of opinion on Bonaparte and showed that historians usually lined up like lawyers, either prosecuting or defending the French general-turned-leader. Neutrality and ambivalence were unpopular paths. “Throughout the nineteenth and early twentieth centuries they mostly fell, all too simplistically, into two camps: supporters and opponents,” writes the Princeton historian David A. Bell in his new book, Napoleon: A Concise Biography. “Despite uncovering great masses of source material, most of the historical works generally spent too much time refighting old battles to provide much genuine illumination.” Those works are astonishingly numerous: it has been said that no other human being has had more books written about him or her, except for Jesus Christ—more than 220,000 books and articles as of 1980 alone. Historian Charles Esdaile has claimed that Napoleon is second only to Christ in appearances in cinema, as well, a testament to his popularity in the twentieth and twenty-first centuries.

Fortunately, the Manichaeanism that characterized so much post-1815 writing about Napoleon is absent both from Bell’s short book and from Napoleon: Soldier of Destiny, the first installment in a two-part biography by the English historian Michael Broers. Both works are highly nuanced, showcasing the monstrosities that Napoleon inflicted on Europe but also highlighting the lasting positive impacts the French leader left on the continent he almost single-handedly ruled for a brief but spectacular period.

Both also persuasively rebut claims that he was a proto-totalitarian, the precursor to Mussolini and Hitler. “No dictator of the twentieth century,” wrote historian Paul Johnson, “was without distinctive echoes of the Napoleonic prototype.” If that was so, it was primarily because Napoleon’s rule was, along with the French Revolution that he simultaneously ended and consummated, the marker of the modern age. “Circumstance rendered Napoleon rather more than the traditional Caesar,” as R.S. Alexander put it. L’Empereur was no Führer. That much can be said for him. And, of course, so can much else, for and against.

The French Revolution is routinely fingered as the birth of the Modern Age as far as politics as concerned. As much as time can possibly be sliced into befores and afters, the French Revolution qualifies more than any other event as the knife that did the slicing. The number of developments attributed to it is staggering. Nationalism, arguably the most powerful political force in the world, has been dated to France in the 1780s, by Hans Kohn and others. Contemporary forms of warfare are likewise identified as originating there. “Modern militarism first arose,” Bell wrote in a previous book, The First Total War, “in Revolutionary France and helped bring about the first military coup d’état of modern times.” The late Eric Hobsbawm went as far as anyone in arguing that the ”ideology of the modern world first penetrated the ancient civilizations which had hitherto resisted European ideas through French influence. This was the work of the French Revolution.... The French Revolution is a landmark in all countries.... In terms of political geography, the French Revolution ended the European Middle Ages.”

Napoleon’s singular role in these momentous developments has been curiously downplayed. His historical importance has of course been recognized, but his significance as a politician has been de-emphasized in favor of his military achievements. To some extent, this imbalance is understandable. Napoleon’s battlefield victories are indisputable in a way his accomplishments in the civilian realm are not. Rivoli, Ulm and above all Austerlitz were clear-cut victories (Bell notes that in 2005, France’s then president Jacques Chirac declined to attend the two-hundredth anniversary ceremony marking the Battle of Austerlitz, revealing much about the current fondness for Napoleon in contemporary society). The French gained territory and their opponents lost it.

Even when it comes to guns instead of butter, though, some present-day critics are unwilling to give Napoleon his due. “After all, the military record is unquestioned—17 years of wars, perhaps six million Europeans dead, France bankrupt, her overseas colonies lost,” the historian Victor Davis Hanson has written. This is to confuse Napoleon as a foreign-policy strategist with Napoleon as a general. The predecessor to Bismarck he was not. But the heir to Alexander the Great he was. Napoleon’s contemporaries had no such compunctions about acknowledging his military abilities. His most important opponent, the Duke of Wellington, identified him as a “genius,” famously saying, “his presence on the field made the difference of forty thousand men.” It was precisely those military leadership qualities—the ones that helped form the greatest European empire since the Romans—that awed early nineteenth-century Europe. As Johann Peter Eckermann told Goethe, “we see at his side divine protection and a constant fortune.” Hegel said that Napoleon was the “world-soul...astride a single horse, yet reaching across the world and ruling it.”

But the awe was due to the man on horseback, not the executive passing legislation. Napoleon’s unmatched skill in navigating the treacherous waters of post-revolutionary French politics was underappreciated at the time, primarily because politics was an underappreciated art. After all, with the exception of England, Europeans leaders did not have to be diplomatically adroit to maintain power. They simply had to be of royal descent. And yet, just as the French Revolution birthed modern politics, so was Napoleon, in effect, the first modern politician. No previous leader had been so skilled in marshaling public support for domestic and foreign ventures. This was no small source of frustration to his opponents. The royalist Chateaubriand, who was banned from Paris for comparing Napoleon to Nero, wrote:

"One asks oneself, by what sleight of hand Bonaparte, who was so much the aristocrat, who hated the people so cordially, has been able to obtain the popularity which he enjoys. For there is no gainsaying the fact that this subjugator has remained popular with a nation which once made it a point of honor to raise altars to independence and equality."

Chateaubriand had been appointed as a diplomat before resigning in disgust at Napoleon’s epoch-defining 1804 execution of the Duke of Enghien. (This killing led to Beethoven removing Napoleon from the dedication of his Third Symphony and to the legendary quip—made by police chief Joseph Fouché but often wrongly attributed to the diplomat Talleyrand—that “It was worse than a crime: it was a blunder.”) He explained Napoleon’s popularity as resulting foremost from an essential French tendency to worship equality to the point of favoring despots who shame the elite. “A proletarian king, he humiliated kings and noblemen in his anterooms,” wrote Chateaubriand. “He levelled the ranks, not down but up.”

Read more than one hundred and fifty years later—these words appeared posthumously in 1849-1850 in the aptly titled Memoirs from Beyond the Grave—Chateaubriand’s writings are simultaneously incisive and erroneous. They correctly identify that a major source of Napoleon’s appeal was his astonishing rise from his birth in a modest household in obscure Corsica, an ascent that seemed to embody the Revolution’s promise of egalitarianism. Broers shrewdly notes that among Napoleon’s first endeavors upon taking power was to open public parks. “The public parks of Napoleonic Paris were physical plebiscites, and an opening of a culture previously the preserve of the privileged, to the nation,” he writes. The number of such populist programs was significant. There was the State Council, which continues to advise the executive and provide oversight of government activity; the enshrinement of government and military promotions based on merit, not birthright; a national bank and stabilized currency; and most of all the Napoleonic Code.