The National Media Is Fanning Hysteria About Racism 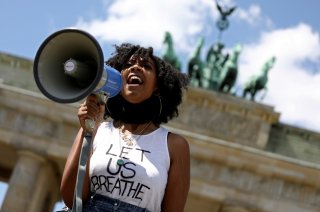 Once upon a crime in America, in a state dominated by liberal politicians for most of the past seventy-five years, in a city in that state with a strong tradition of what these days is called “democratic socialism,” a man with a history of violent crime repeatedly tried to intimidate a shopkeeper into accepting a counterfeit twenty-dollar bill. The man was behaving erratically, the merchant felt uneasy, possibly threatened. Eventually, the police were called.

In the confrontation that followed, a member of the Minneapolis police force—a white cop with numerous complaints of misconduct on file—ended up killing the black man with a criminal history. In an odd twist, it has since been reported that these two less-than-model citizens already knew each other, having both worked as part-time bouncers in a local nightspot. We may never know what, if any, ghastly personal dynamic was at work here. But we do know that Eric Chauvin, the white cop, ended up with George Floyd, the black man, pinned to the ground; Chauvin’s knee pressed hard against his neck. Within minutes, George Floyd was dead.

The incident—or at least part of it—was caught on various cellphone cameras. One recording of it quickly went viral on national television and the internet. The liberal Democratic leadership in Minneapolis and the liberal Democratic Attorney General of Minnesota were slow to react to what was clearly a brutal, shocking incident. Once they did react, they spent more time railing about “systemic,” “endemic,” “institutional” racism in America than they did in taking personal responsibility for what had happened on their watch in their own backyard.

Meanwhile, the mainstream national media started doing what it does best: fanning the flames of hysteria. People were bombarded round the clock with the image of a shocking, brutal act and told, in so many words, that America was a bigoted, racist society, that the racist-in-chief was Donald Trump, and that the blood of George Floyd was on the hands of “White America,” in general, and the Republican administration in Washington in particular,  half a continent away from the Democratic-controlled city and state where the hideous act was committed.

Mass marches were hastily organized and the demonstrations in many cities came to include violence, theft, arson and even the loss of innocent lives—not at the hands of “brutal” police, but at the hands of rioters and looters given free rein in many cities from coast to coast, usually in states run by liberal Democrats and with liberal Democratic mayors.

While most of the marchers and demonstrators were sincere and nonviolent, their civil disobedience—denying their fellow citizens freedom of movement on roads, highways and city streets—gave ghetto looters and creepy White, leftist Che Guevera wannabees the perfect cover for their work of destruction. The nonviolent demonstrators became human shields between the criminals and the authorities. Of course, as far as the Antifa types were concerned, the more nonviolent demonstrators became collateral casualties, the better.

In one respect, however, the sincere, nonviolent demonstrators were culprits themselves. By buying into a false narrative of collective White guilt, by ignoring the conditions on the ground in urban ghettoes that breed a grassroots criminal class of fatherless, angry, uneducated and unskilled young Black males who are responsible for the overwhelming majority of violent deaths of Black Americans, they are part of the problem rather than part of the solution.

Spending a few hours in the street demonstrating against bumptious, blustering Donald Trump—the man they love to hate, but who had nothing to do with the death of George Floyd—may make naïve millennials feel good in a smug, self-satisfied way. But it serves no real purpose and certainly saves no lives.

You might even say that it’s a criminal waste of time.