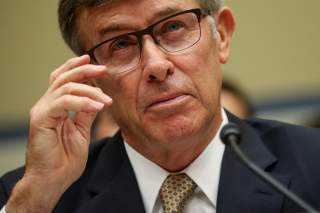 Acting Director of National Intelligence Joseph Maguire testified before the House Intelligence Committee today to answer questions about the whistleblower complaint that has led the Democratic-majority House to open an impeachment inquiry on President Donald Trump. More procedural than substantive, Maguire’s testimony didn’t provide actionable content that the Democrats can readily move forward with.

Prior to the hearing, the administration released a transcript of Trump’s call with Ukrainian president Volodymyr Zelensky and the official whistleblower complaint.

That didn’t prevent it from becoming more incriminating than anything contained in the Mueller report which he championed for over two years, according to House Intelligence Committee Chairman Adam Schiff (D-CA).

Distilling the “essence” of what Trump told Zelensky on the phone, Schiff proceeded to give multiple longform, fabricated quotes. One of the fake Trump quotes implied that Trump asked the Ukrainians to “make up dirt on my political opponent,” referring to Joe Biden. Later on, Rep. Mike Turner (R-OH) said Schiff made up the remarks “because sometimes fiction is better than the actual words on the text.” Schiff responded that his open remarks were meant to be “part in parody,” to which Rep. Brad Wenstrup (R-OH) countered, “You know it’s a shame we started off this hearing with fictional remarks . . . and I will contend that those were intentionally not clear . . . and I don’t believe this is the time or place for parody.”

Maguire, for his part, was more than willing to concede that the complaint was “credible” and both the whistleblower and Inspector General of the Intelligence Community Michael Atkinson are acting in good faith. When the complaint was brought to him, Maguire had concerns over whether it fell under his jurisdiction. This is because it centered around a diplomatic conversation that included the president of the United States (who is not a member of the intelligence community). Also, the call did not deal with intelligence. The situation, he said, was “unique and unprecedented.”

Maguire first brought the complaint to the attention of the White House to find out if the call was to be protected by executive privilege. While that topic was being deliberated, the administration never invoked executive privilege. Maguire then brought the complaint to the Office of Legal Counsel to see how he should proceed. “I have found different lawyers have different opinions on the same subject,” he said. They informed him that he was not legally required to turn the complaint over to Congress due to relevancy questions. Maguire said he was never instructed by the White House to not provide information to Congress, and when he invoked executive privilege to protect the contents of his conversations with Trump, he made clear this was not due to official instruction either.

“You’re going to be part of a charade of legal word games. They’re going to try to get you to say something that can be repeated by the media that is here that wants to report this story,” Ranking Member Devin Nunes (R-CA) told Maguire. Nunes proceeded to accuse Maguire of not running a tight ship, and that leaks are continually coming out of the intelligence community. Nunes concluded by saying this whole thing should be happening behind closed doors.

Maguire stated multiple times that it was not his job to judge the administration’s foreign-policy decisions. Maguire’s testimony overwhelmingly focused on the logistics of the whistleblower complaint, not the substance. He did, however, say that he was working with Schiff to have the whistleblower come forward and testify with full legal protections. After the hearing, the New York Times reported that the whistleblower is a male CIA officer who was previously stationed at the White House.