Is Nationalism a Good Thing? 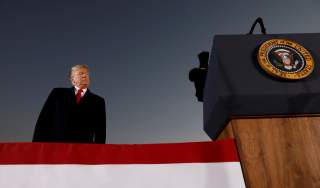 Economic globalization ran into difficulties a decade ago with the crisis we call the Great Recession. Political transnationalism, whether of the European Union variety or of the sort required by George W. Bush’s “global democratic revolution,” has likewise left only disillusion in its wake. The return of nationalism is therefore not so surprising. But why nationalism of the right rather than left?

From international Communism to today’s campus multiculturalism, the left has often been anti-nationalist. But John B. Judis’ new book offers a timely reminder that there is such a thing as a nationalist left, and the author himself is part of it. A longtime writer for The New Republic and the author of numerous books, including a well-received biography of William F. Buckley, Jr., Judis has consistently argued for a new American nationalism. Though nationalism “is often associated with the extreme right of Germany’s Hitler,” Judis writes, it “was also central to the French revolutionaries of 1789, the North in the American Civil War, the national liberation movements of the twentieth century and to Britain’s resistance to the Nazi onslaught during its ‘finest hour.’”

Even in Germany, nationalism did not have to mean Nazism—which was the result not of national unification and the romantic myths accompanying it in the nineteenth century but rather of such proximate causes as defeat in World War I, the punitive terms of the peace that followed and “the specter of Bolshevism… the incomprehension of American, British, and French finance officials during the 1920s, and the utter failure of an embattled Weimar democracy.”

For Judis, nationalism serves a check upon economic power in a modern world otherwise bereft of institutions that provide shelter and support for the naked individual. “Modern capitalism’s divorce of production from the family,” he writes, “and the challenge to the traditional family from the new sexual norms weakened a key institution that allowed individuals to transcend their isolation. Science’s conflict with religion dealt another blow to an important source of group identity.” Labor unions were, in part, an earlier answer to the problem, but unions themselves have been rendered powerless by the now global mobility of capital. Only the nation can restore a modicum of power and dignity to the individual as something more than a mere unit of production and consumption—a gear in some great impersonal machine.

Old sources of identity—from the family and the traditional family trade to the church and the neighborhood that calls you its own—have dissolved in the global market. But this is not a problem for a certain highly educated and economically advantaged elite. “They have multiple identities,” Judis notes, “including a profession (with membership in professional associations) and a firm, a practice, or a university (in whose future they have a stake).” He allows that these cosmopolitan “anywheres” (a term Judis borrows from David Goodhart) “are proud to be American or French or British (or English), but unlike the somewheres”—that is, the people who defined themselves by old forms of attachment—“they don’t depend primarily or even significantly for their self-approbation and esteem on that identity. It’s not necessarily their hedge against individuality morality or anomie.”

As concise as this book is, Judis draws upon a compendious collection of interesting sources. He quotes, for example, from Greg Ferenstein, a journalist who polled founders of Silicon Valley startups and discovered, in Judis’ words, that “Sixty percent wanted to increase immigration. Twenty percent favored totally open borders. Seventy-three percent put ‘global trade’ as a priority over ‘American workers.’” In Ferenstein’s own summary, “They want more global alliances at the expense of sovereignty, few restrictions on immigration, and believe in state incentives to make people healthier, more educated, and civically active.” The global capitalists of Silicon Valley are not exactly libertarians: they want government not only to facilitate market expansion but also to supply the defects of society and moral habit. Those gears need greasing if the machine is to run efficiently. The state is a mechanic, in service to the engineers.

“Economic decline is often accompanied by a decline in the social network of unions, bars, and social clubs,” Judis observes with reference to Justin Gest’s The New Minority: White Working Class Politics in the Age of Immigration and Inequality. The picture is much the same from the East London boroughs of Dagenham and Barking to “North Carolina towns that until very recently were centers of furniture manufacturing” and “northern French towns decimated by the loss of manufacturing and mining jobs,” to say nothing of conditions further east in Europe. The displacement of economic production displaces cultural connections as well, with national identity virtually the last identity to survive among the human subjects of this great experiment in globalization.

Judis examines nationalism today in both Europe and the United States. What he says about developments on one side of the Atlantic often apply to the other side in ways that Judis himself doesn’t highlight. One example arises from his description of the poor fit between the northern and southern national European economies that went into creating the European Union. “Northern economies… have depended on export surpluses to drive consumer and business demand for their products and keep their workers employed. To maintain export surpluses, these countries had to keep productivity up and costs, including labor costs, down.” By contrast, “the Southern economies… were more dependent on domestic consumption, driven by non-tradable services, public spending, and private debt.” Different attitudes toward monetary and fiscal policy, trade and immigration naturally followed from this split. Yet what is doubly noteworthy is how the economic models that apply to the north and south of Europe also apply to the United States, which under the leadership of cosmopolitan “anywheres” has moved from an economy more like that of wealthy and relatively stable northern Europe to one that has many of the characteristics of the poorer and less well-governed European south. America is not yet in the condition of Italy or Greece, and given our country’s size and wealth, it has far to fall. But we are becoming more like the consumer-oriented losers than the production-driven relative winners of Europe.

“Without national control over multinational corporations and banks and without control of borders and immigration, it is very hard to imagine the United States becoming a more egalitarian society,” Judis observes, which leads him to conclude that “Globalization is incompatible with social democracy in Europe or with New Deal liberalism in the United States.” While these lines illustrate Judis’ left-of-center political commitments, his particular views on immigration will make many of today’s progressives rather uncomfortable. The immigration policy he wishes to see the United States adopt involves first “blocking illegal immigration through stiff employer penalties, while giving a path to citizenship for the roughly 11 million illegal immigrants already here.” The policy itself is not necessarily out of line with center-left thinking, but the phrase “illegal immigrants” violates what are now politically correct taboos. So does the substance of Judis’ second proposal in this area, which is “to reduce the annual number of immigrants, and to narrow the conditions for family reunification, while giving priority to skilled immigrants.” This is instead in line with right-of-center thought about immigration, and coming from a Donald Trump supporter it might even be labeled by the left as racist. Reducing overall immigration, Judis writes, would “reverse the growth of immigrant ghettos, which slow assimilation, and allow those immigrants already here to move up the economic and social ladder.” He notes that assimilation and social advancement historically did take place after the waves of immigration restrictions imposed by law in 1921, 1924 and 1929. “These bills were highly discriminatory,” he acknowledges, “but the reduction in immigration was a key to the assimilation of the Southern and Eastern Europeans who had immigrated over the prior forty years. Such a proposal can be effective without discriminating against particular nationalities.”

Indeed, it can—but the American left is neither ideologically prepared to accept that nor does it possess the political incentive to do so. Judis is a somewhat lonely voice. A number of left-of-center writers and political leaders seem prepared to risk the breakdown of assimilation and increasing economic inequality if the reward is a growing electoral base and a chance to tar Republicans as xenophobes. Judis has paid his dues as a journalist of the left throughout a distinguished career, so he may not suffer professional harm from admitting, near the start of The Nationalist Revival, to saying, “I don’t give a damn about people around the world” when asked about the benefits of globalization outside of America. But some of Judis’ policy ideas are outright heresy on the modern left. So much so that heretics such as Mickey Kaus have noticeably drifted, or, if you prefer, lurched, toward the right. Judis is hardly on the same trajectory; his ideas, however, stand a good chance of finding more favor among Trump voters than Clinton voters—notwithstanding Judis’ explicit commitment to New Deal liberalism and social democracy. For much of the left and right alike today, immigration takes precedence over what one thinks about the welfare state.