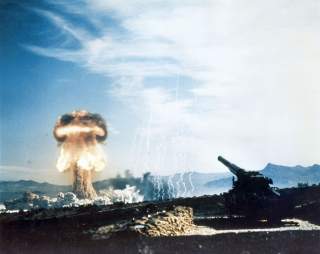 At the outset, let’s stipulate some common sense about the American tactical nuclear weapons deployed in Europe. No matter what arguments we might make, pro or con, about keeping those arms, it’s not the right time to remove them. Not because they have any utility, but because optics matter: Russian president Vladimir Putin’s open aggression against Ukraine currently makes it impossible for Barack Obama, or for any NATO leader, even to suggest anything that would look like capitulation to Russia and thus encourage Putin to continue pressing his luck. The Atlantic Alliance has more pressing issues in Europe to deal with besides the fate of a moldering inventory of tactical nuclear bombs, and there’s no point in handing a propaganda victory to a Kremlin already in a state of agitation, if not full-blown panic.

Saying that we should not remove these weapons in the middle of a crisis, however, does not then mean that there are any good reasons to hold on to them much longer. Tactical nuclear arms in Europe are literally outdated: not only are the bombs themselves reaching the end of their service life, but the strategy to employ them was overtaken by events twenty years ago.

None of that has stopped three prominent foreign-policy figures—Brent Scowcroft, Stephen Hadley and Franklin Miller—from arguing a few days ago in the Washington Post that NATO should “reaffirm the value to the alliance of the continued presence of the modest number of U.S. nuclear bombs in Europe.” This affirmation, they claim, “is necessary because we are again hearing calls for the United States to unilaterally withdraw its small arsenal of forward-deployed nuclear bombs. Those arguments are shopworn, familiar—and wrong.”

I’m not as certain these arguments are so wrong, not least because I’m one of the people who has been making them for some years. Scowcroft, Hadley and Miller are conflating the tired demands of the antinuclear left—who wanted the bombs gone even when the Soviet Army was poised on the edge of Europe—with more recent (and better) arguments that take into account not only the changes in Europe, but the need to rethink our nuclear strategy.

Indeed, the “familiar and shopworn” arguments are the ones that Scowcroft, Hadley and Miller present in their defense of the tactical arsenal, which sound as if they were written in 1974 and not 2014:

“A principal function of forward deployment [of tactical nuclear weapons] has been, and remains, to be a visible symbol to friend and potential foe of the U.S. commitment to defend NATO with all of the military power it possesses.”

There is some truth to this, although it was a more salient observation thirty years ago. Today, it is an affirmation that is no longer welded to a strategy.

In the 1950s and early 1960s, tactical nukes were part of a last-ditch effort to stop superior Soviet conventional forces. Later, however, they were inserted as a crucial rung in the escalatory ladder to a Soviet-American central nuclear exchange. The goal was to convince Moscow that an invasion of Europe would produce an inevitable tipping of nuclear dominos, from the battlefield all the way to all-out war. Thus, the Kremlin would never dare an invasion of Europe (which it could have accomplished by conventional means) because it would have meant courting the destruction of the USSR.

Is that still NATO’s strategy? I hope not; there is no longer a Central Front on which to fight, and in any case, Russia is now conventionally inferior to NATO and could never sustain the kind of invasion envisioned by Soviet planners—not least because they no longer have any allies. Tactical nukes derived their deterrent power from the realization on both sides that NATO would have to resort to them at a moment of unpredictable desperation against a far-mightier invasion force. That moment is hard to imagine today, even if Putin could reconstitute a more powerful Russian army (as he seems intent on doing).

Scowcroft, Hadley and Miller made several other claims, including: that newer members joined NATO to get under the nuclear umbrella (which is not entirely true); that NATO’s conventional power isn’t as strong as it looks and isn’t enough to deter a Russian attack (which is unlikely, but unknowable); that the Russians still think nuclear weapons matter (that’s true); and that NATO isn’t really all that divided on keeping the bombs around (which is clearly false).

Keeping nuclear weapons in Europe isn’t a coherent strategy, but rather represents a cobbling together of fragments of various strategies from the past. Without the overarching concepts of extended deterrence and mutual assured destruction in which they were embedded, tactical nuclear arms do not carry some kind of magical deterrent power merely by existing. If anything, they are more dangerous when detached from their original purpose: during a Cold War invasion of Europe, they were likely to be “use or lose” weapons, launched in strikes that would get them into the air and away from their bases before they were overrun. Today, they would have to be trundled out and attached to jets during a crisis, even if they were not in danger themselves, a provocative act that would play right into the Russian obsession with nuclear force.

Lacking in all this is just how these weapons—which, as Scowcroft and his co-authors admit, are political in nature, rather than military—actually serve the cause of deterrence and enhanced security in Europe. Think about this sobering fact: Russia entered Ukraine, with multiple incursions, sliced off a chunk of that sovereign state, and then formally annexed it. All of this happened with little more than throat-clearing in the European Union, who had to be cajoled into sanctions. Later, the downing of Flight MH17 finally shocked the United States and the EU into imposing stronger sanctions, but we’ve mostly left the Ukrainians on their own—enjoy the MREs, fellas—to fight off the Russians in Donetsk. Again, the EU had to be dragged along for greater sanctions, an effort that is not yet producing any tangible results.

NATO should have ditched these weapons a decade ago and spent more time beefing up its air and ground assets. The United States should also have focused sooner on the game of Roman knuckles Putin is intent on playing with us, rather than trying to pull one more moment of life from a Russian “reset” policy whose goals were admirable, but whose clumsy execution doomed the whole idea. Removing U.S. tactical nukes, instead of wringing our hands about what to do with them, could have been played as a moment of strength, part of the revitalization of NATO as a tough, confident, technologically supreme, extraordinarily wealthy alliance of twenty-eight free nations. Instead, we still dither over an outdated nuclear crutch.

And yet, we can’t remove them, at least not yet. Putin, less a nationalist than a Soviet nostalgist, already treats President Obama with the contempt his Soviet forefathers once heaped on the feckless Jimmy Carter. To treat Moscow to a political theater in which the president tries to remove 200 nuclear bombs while in the middle of five other crises at the same time would be pointless.

But there will be time, before Obama leaves office, for him to make good on bold promises made in his first term. Like George Bush the elder in 1991, he can use his famous “pen and phone,” and bring home the last few-hundred souvenirs of Cold War nuclear strategy that we never wanted to use.

Then he, or his successor in 2017, can change America’s nuclear strategy—and must. But one thing at a time.