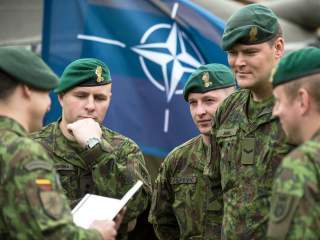 Donald Trump’s dismissive comments about NATO being obsolete, and that it might be fine if the alliance breaks up, have ruffled feathers on both sides of the Atlantic. Gen. Joseph Dunford, chairman of the Joint Chiefs of Staff, was the first U.S. government official to outright rebuke the Republican front-runner by noting that “in my mind, the relevance of NATO is not at all in question.” On Monday, President Obama followed suit by reassuring NATO Secretary-General Jens Stoltenberg that the alliance “continues to be a linchpin, a cornerstone of U.S. security policy.” While European leaders have largely refused to comment on questions relating to the U.S. presidential election, Polish President Andrzej Duda observed that a stable Europe is in the best interest of the United States.

But let us for a moment entertain Trump’s radical idea, and assume in a hypothetical scenario that the United States breaks away from NATO, because the next U.S. president is fed up with protecting and paying for those free-riding Europeans while not getting anything in return.

(According to Article 13 of the Washington Treaty, “any Party may cease to be a Party [of NATO] one year after its notice of denunciation.” For the sake of argument, let us ignore this part as a simple pro forma step.)

The ripple effect of Washington’s unilateral decision to leave NATO will most likely prompt the other twenty-seven member states to reevaluate the alliance’s overall purpose and sustainability.

Canada will probably be the second nation to exit NATO, given Ottawa’s limitations on projecting military power across the Atlantic, and possible fears of becoming entangled in burdensome European conflicts far away from its shores. Turkey, depending on how far its EU membership talks have progressed at this point, might be tempted to remain in the alliance. However, the majority of European nations will most likely want a buffer state vis-à-vis the Middle East, and consequently push Ankara out of any post-NATO alliance arrangement.

Without the United States, Canada and Turkey involved, five factors are most likely to influence Europe’s geopolitical trajectory:

(1) The extent of political dismay and the degree of public anger across the continent regarding Washington’s decision to unilaterally leave NATO,

(2) The ability of the EU’s Common Security and Defense Policy (CSDP) to serve as an institutional framework that can mirror NATO’s operationalization process,

(3) The feasibility of Article 42 (7) of the European Treaty to support and cement alliance cohesion, analogous to NATO’s Article 5,

(4) The ability of NATO’s European members to find common ground on nuclear weapons policies in the absence of the U.S. nuclear umbrella,

(5) And Russia’s foreign and defense policy changes in reaction to the new geopolitical realities in Europe.

The best-case scenario would see NATO’s remaining European members continue to consolidate a “European” alliance, by striving for greater interoperability and increased defense spending, to compensate for the absence of U.S. armed forces, capabilities and forward-based equipment in Europe. This new alliance framework—let’s call it the European Treaty Organization (ETO)—will probably maintain an ever closer relationship with the European Union until both organizations merge over time. Meanwhile, an isolationist Washington will be condemned to watch from the sidelines while the Europeans set out to coordinate their own defense policies, which might diametrically oppose U.S. national interests abroad. The “Europeanization” of defense will most notably result in the decline of U.S. arms exports to the continent, and the rise of the European defense industry as the main supplier of the ETO forces.

One major challenge the ETO will have to face from the outset is devising a workable nuclear weapons policy. If the ETO is committed to the cause of nuclear nonproliferation, France will have to decide whether it will leave the alliance and revert to Gaullist sentiments, or spur ETO integration in a desire to develop a comprehensive European defense force. Britain, on the other hand, if it has not already left the European Union, will have to make a decision on whether to refrain from modernizing its Trident nuclear program, or leave the ETO in an effort to find shelter in an Anglo-Saxon defense arrangement, which might include the United States, Canada, Australia and New Zealand, synonymous with the Five Eyes intelligence-sharing agreement.

Internally, the ETO will either be fractured across several foreign policy vault lines, which will either force the alliance to remain neutral on most defense issues outside the continent (noninterventionism), or else the ETO will overcome national animosities at home and establish itself as a democratic peer competitor to the United States (great-power competition). Neither outcome would be in the interest of policymakers in Washington.

The worst-case scenario would be if NATO simply dissolves itself and the European Union is unable to fill the institutional void. The result would be a mixture of bilateral and multilateral military alliances, based not on economic interdependence, but formed according to geographic proximity, cultural affinity, threat perception, relative military power and existing defense arrangements on the continent.

Germany will probably take on a balancing role, given the nation’s history and geographic location in the heart of Europe. Berlin will most likely aim to ally itself, first and foremost, to France, Poland and the Benelux states, in an attempt to hedge against any counterbalancing behavior and bloc building in Europe. German defense policies will most notably clash with those of former communist states, which will seek to expand on the Visegrad Group, for example, to guard against possible Russian aggression. A desire for nuclear proliferation within the eastern European bloc will be the most likely consequence if France, Britain and the United States are unwilling to serve as offshore balancers. The Scandinavian countries will probably either veer toward neutrality or find common ground with the Visegrad Group, if threat perceptions vis-à-vis Russia are producing significant policy overlaps.

The Balkans will most likely revert to becoming the most volatile region in Europe. With NATO undone, and the EU unable to hold the former Yugoslavian states together with dwindling economic incentives, the continent might experience a repeat of growing nationalism and violence that could seek to undo, for example, the independence of Kosovo. Turkey, under an increasingly authoritarian president, might also feel compelled to assert itself and unify Cyprus by force, if left unchecked.

In contrast, western Europe will most likely remain peaceful, in accordance with constructivist theory. The sole exception might be a dispute between Britain and Spain over the sovereignty of Gibraltar and the strategic control of the strait leading into the Mediterranean.

However, if the United States, Russia and possibly even China decide to actively meddle in European affairs by signing bilateral military alliances with European states, the consequences and political fallout would be difficult to contemplate. Imagine a world where, democratic institutions notwithstanding, France would form an alliance with Russia in a repeat of pre–World War I sentiments, Poland would become a junior partner to the United States to safeguard its independence and Germany would engage in a military alliance with China out of pure economic interest. A network of cascading alliance across the continent might be the end result, and possibly serve as a precursor for another global catastrophe.

While all these scenarios are hypothetical, and some might be more realistic than others, NATO’s contribution to the stability of Europe and the security of the United States should not be underestimated. If NATO were to dissolve, the unintended consequences could be far-reaching. My advice to Mr. Trump is to not take NATO for granted. Cherish it, and reform it—but never abandon it.

Stefan Soesanto is a non-resident James A. Kelly fellow at Pacific Forum CSIS.