NATO After London: How Germany and the United States Can Lead the Alliance 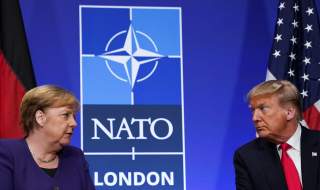 Common wisdom holds that German-American relations have hit rock bottom and won’t bounce back until after Trump. But the consensus could be wrong.

After all, the meeting of NATO leaders in London revealed that German Chancellor Angela Markel and President Donald Trump agree on at least one thing: NATO is not as “brain dead” as French President Emmanuel Macron earlier suggested. And that is something to build on. So, here is a doable list of building blocks focused on erecting a strong forward defense through NATO.

Harmonize How We See the World

Recently, when talking with a number of Europeans, I pointed out that Bush, Obama and Trump—though three very different presidents—shared a common threat perception. All had the same bad guy list: Russia, China, Iran, DPRK and transnational Islamist terrorism.

Each president had other items on his list—like climate change for Obama and border security for Trump. Each also had a different approach for dealing with the world’s greatest destabilizing forces. Still, the list was identical. This agreement, in fact, reflects a strong bipartisan consensus that has emerged in Washington.

In response, one of the Germans said this observation “makes us uncomfortable. It’s not how we Germans see the world.” He’s right. It’s not. They are Europeans.

But the presence of differing world views is not an insurmountable challenge to the future of the transatlantic community, as many have suggested. In practice, when did Europeans ever, even during the height of the Cold War, see the world exactly the same way? The answer, clearly, is “never.”

The answer to harmonizing our perceptions isn’t to tell the Germans to think like Americans nor is it to have Americans mimic good Europeans. Rather, a consensus for action is built on common interests.

Germans don’t like to see the world as divided between friends and enemies. Further, in contrast to the bipartisan consensus prevailing in the United States, Germany continues to have a conflicted internal debate about what represents real, credible, national security concerns. If you asked different party leaders, then you would get different answers. In particular, many don’t perceive the Russian threat as being nearly so critical as do the Americans and their Central European neighbors.

On the other hand, Germans do have a good degree of consensus over a commitment to international law; European values, EU integration, bridging the gap of distrust between East and West and, yes, the transatlantic community. Their sense of responsibility and obligation to these commitments is what drives the German consensus to support NATO and—to some degree—help promote stability on Europe’s eastern flank.

This could well the basis for a shared vision of common action with the United States. Both nations want a Europe whole, prosperous, free and at peace. And both recognize the danger of a “short war” scenario—something like what happened in Georgia or Ukraine—on the Eastern flank.

As a NATO leader, Germany can do a lot to ensure that Moscow views the prospect of launching another short war is untenable. It can make sure that Germany remains an effective hub for supporting NATO’s forward defense—i.e., that it can defend its own territory from air and missile attack and little green men, that it can defend air and sea lines of communication, and that it has the capacity to receive allied forces, push them forward and support them.

That’s a key mission for Germany within the alliance. It is thoroughly consistent with its desire to contribute to peace and stability. It’s defensive in nature. It’s realistic, given the kinds of force Germany can produce and sustain.

A Germany that is a secure and defensible power projection platform for NATO would do much to deter the likelihood of conflict. It is also a leadership role that dovetails well with what the United States needs to ensure that NATO remains a credible conventional deterrent.

Germans have made the case they can’t increase their annual defense spending to 2 percent of GDP until 2031 because their military could not absorb that level of investment any faster. That’s been a sticking point between Washington and Berlin. One proposal is for Germany to contribute 0.5 percent of GDP annually for the next half-decade to build up capabilities among other Central European NATO members.

NATO currently has an initiative called 30/30/30. Its goal is to make available thirty battalions, thirty ships and thirty air wings that can fight in thirty days. This would be another valuable contribution to deterring the “short war” scenario. Those don’t have to be more German units. The fund could help fill that commitment.

The United States has to be practical about what this partnership can achieve. Washington should also be more appreciative and complimentary of the “hard power” contributions Berlin is making.

Let’s be realistic. Germany is going to have weak coalition governments for the foreseeable future. It is hard to imagine a constructive public debate on defense. Just brow-beating the Germans isn’t going to get us anywhere.

Nor is Germany a weak sister. The Germans are in Mali. They are working in Ukraine and the Balkans. They have troops in the Baltic. It’s worth acknowledging what they are doing.

Exercise DEFENDER represents the largest deployment of U.S. forces to Europe in the last quarter-century. Over thirty thousand U.S. forces will participate. There should be a lot of anticipation for this exercise—mostly to demonstrate where the shortfall and deficiencies are. This exercise should be seen and used as a “wake up call” that more needs to be done, not just a celebration of the American commitment to reinforce NATO.

The exercise per se will not be seen as contributing to deterrence since Russians aren’t entertaining long-war scenarios that give American divisions months to stream into Europe defense. If reinforcement is going to help to deter conflict, forces have to get to Germany quickly and move to the front in well under thirty days. That kind of response is only possible if German and American leaders work together to demonstrate that the two countries can do this.

If the Germans and Poles had an agreed-upon concept for the future of Central European security, then it would have a powerful impact on Washington and, in turn, galvanize cooperation and consensus across NATO. The London meeting concluded with the announcement that members would undertake a “strategic reflection process,” and a German-Polish white paper should be part of that process. The United States should encourage both nations to make it so.

The United States Continues to Step-Up

Misguided claims that “America First” means America will retreat to isolationism have, unfortunately, found many believers in Europe. It may take years for the critics to acknowledge that the United States isn’t leaving NATO and that America still sees preserving a strong, stable and free Europe as a vital national interest. Certainly, this administration believes that and is working to that end, and subsequent administrations will no doubt continue that effort.

Still, the United States can’t change the mind of every German wary of this administration. No matter. The United States can continue to do its job and meet its responsibilities within the alliance. The primary job is to make sure a short-war scenario is never seen as a viable option by Russia or anyone else.

Arguably, deterring Russia’s belief that it could win a quick war is the number one military mission for NATO. It’s worth noting that the United States and NATO are already doing a lot of thinking and planning on this. In this respect, looking at the range of recommendations out there among the most important are: a) integrated Baltic-Arctic defense planning, b) fixing extended deterrence, c) rebuilding echelon above Division command and control, and d) putting a U.S. brigade in the Baltic.

Nothing on this list is too heavy a lift for either country. It is, however, a list that would mark Germany and America as what they should be: the joint leaders in NATO. Completing this list will earn both nation’s respect for being champions of freedom, stability and peace.