NATO Arms Sales to Ukraine: The Spark That Starts a War with Russia? 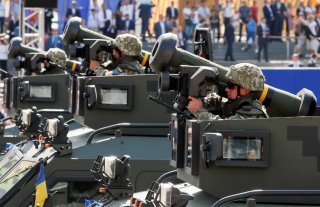 The United States and its NATO allies are busily arming Ukraine and engaging in other actions that encourage the leaders in Kiev to believe that they have strong Western backing in their confrontation with Russia and Russian-backed separatists. The conflict between the Ukrainian government and separatist forces in the Donbass region, which has remained at a low simmer in recent years, thanks to the fragile Minsk agreements, shows unmistakable signs of heating up. That development is exacerbating already dangerous tensions between Kiev and Moscow. There is growing speculation that Russia might even launch an invasion of Ukraine.

Western leaders are pursuing a reckless strategy that is generating increasingly pointed warnings from Kremlin officials. On two occasions since early April, Russia also has made ominous military deployments near its border with Ukraine. Shortly before the earlier episode, the Biden administration had announced a new $125 million arms sale to Ukraine. Although the transaction was put on hold temporarily in June, $60 million of that package was delivered during U.S. secretary of defense Lloyd Austin’s visit to Kiev in late October.

The United States is not the only NATO member that has made destabilizing arms sales to Ukraine. Turkey is equipping the Ukrainian military with drones, and in late October, Kiev’s forces launched a drone attack that destroyed rebel artillery batteries in the Donbas. Moscow issued strong protests about the escalation to both Ukraine and Turkey. A new deployment of Russian forces near the Ukrainian border also followed, and U.S. secretary of state Antony Blinken expressed concern that Russia might execute a “rehash” of its 2014 military offensive when Vladimir Putin’s government seized Crimea and then provided military support for secessionists in eastern Ukraine.

Arms sales are only one component of the growing support for Kiev on the part of the United States and some of its NATO allies. President Joe Biden has repeatedly expressed Washington’s commitment to Ukraine’s sovereignty and territorial integrity against “Russian aggression.” U.S. and Ukrainian troops have conducted joint military exercises (war games) on several occasions, and Ukraine’s forces have been included in NATO’s military exercises. Indeed, Ukraine hosted the latest version of those maneuvers in September 2021. In response to Washington’s pressure, Ukraine is being treated as a NATO member in all but name.

Logically, such boasts are without substance; Ukraine’s military forces are no match for Russia’s in terms of either quantity or quality. However, a belief in U.S. or NATO military support may cause Ukrainian leaders to abandon prudence and mount an ill-starred confrontation. Once before, the United States led an overly eager client to assume that it had Washington’s backing, and the result was a needless war in which the client emerged bruised and humiliated.

George W. Bush’s administration foolishly encouraged Georgia’s President Mikheil Saakashvili to believe that his country was an important U.S. ally, and that the United States and NATO would come to Georgia’s rescue if it became embroiled in a conflict with Russia. Washington provided millions of dollars in weaponry to Tbilisi and even trained Georgian troops. Bush also had pushed U.S. NATO allies to give Georgia (and Ukraine) membership in the alliance, albeit unsuccessfully.

In August 2008, Saakashvili launched a military offensive to regain control of South Ossetia (one of two secessionist regions). The Georgian offensive inflicted casualties on Russian peacekeeping troops that were deployed there since the early 1990s, and Moscow responded with a full-scale counteroffensive that soon led to the occupation of several Georgian cities and brought Russian troops to the outskirts of the capital. Despite Washington’s previous supportive rhetoric, Saakashvili discovered that the United States was not willing to fight a war on Georgia’s behalf, and he had to sign a peace accord on Russia’s terms.

The parallels between that fiasco and current Western, especially U.S., policy regarding Ukraine are alarming. Washington’s arms sales especially are helping to create a dangerous situation involving Ukraine. President Barack Obama apparently understood the potential for such sales to provoke Russia and trigger an armed conflict. He declined to implement the transfer of arms to Kiev, despite congressional legislation authorizing that step.

Unfortunately, Obama’s successors were not as wise or as cautious. Despite the pervasive canard that Donald Trump was soft on Russia, his administration executed multiple arms sales to Ukraine. In both 2017 and 2019, those packages even included sophisticated Javelin anti-tank missiles, over Moscow’s vehement protests. Similar generous arms sales have continued under Biden.

Washington and its NATO partners need to back away from their increasingly dangerous policies. The Kremlin has made it clear multiple times that it regards Ukraine as a core Russian security concern, and that efforts to make that country a Western military ally risk crossing a bright red line. Adopting measures that encourage a volatile client to engage in provocations that it can’t sustain if its stronger adversary responds by escalating the confrontation is egregious foreign policy malpractice. Arming Ukraine with sophisticated weaponry is a textbook example of such folly. The United States, Turkey, and Kiev’s other enablers need to change course before they turn the simmering Ukraine conflict into a conflagration.