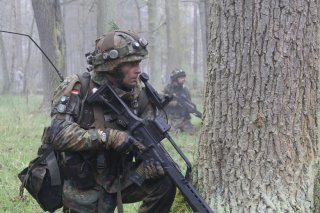 At the first NATO summit in the wake of Brexit, U.S. and European leaders looked to the military alliance as a needed source of stability. As Adm. James Stavridis (Ret.), a former NATO commander, wrote hopefully in Foreign Policy weeks ago, predicting Brexit’s minimal effect on NATO, “There’s no doubt that we have entered a difficult era for the international system, politically, economically, and militarily. The ill effects will take several years to fully play out. But NATO stands ready, stronger probably than it was before, to help mitigate the pain.”

While we share Admiral Stavridis’s hopes in this regard, we feel it is critical for leaders of the alliance to consider more troubling implications of the “leave” campaign for the future of NATO: Could a similar populist campaign lead to efforts with NATO members, including the United States, to leave the alliance? And if so, what can supporters of NATO do to defend it?

Just as few believed the UK would actually vote to leave the EU, it can seem fanciful that any NATO member would bolt from the world’s most powerful military alliance. But it is important to examine the rhetoric critical of NATO in the U.S. political campaign from both Donald Trump and Bernie Sanders, something that has not featured prominently in national politics in America since the end of the Cold War.

When asked about a comment he made in 1997 about NATO that “it is not the time to continue wasting tens of billions of dollars helping to defend Europe," Senator Sanders reinforced his critique. “We spend about 75 percent of the entire cost of the military aspect of NATO,” he said, “Given the fact that France has a very good health care system and free public education, college education for their people, the U.K. has a good National Health Service and they also provide fairly reasonable higher education, you know what, yeah, I do believe that the countries of Europe should pick up more of the burden for their defense."

Total U.S. military spending does equal about 72 percent of the spending of all other NATO allies, but it is not all devoted to NATO (Politifact called the senator’s assertion “half-true”). Nevertheless, he expressed a sentiment of frustration long held by American leaders, including President Obama and President Bush before him. Only five of twenty-eight NATO member states currently meet their agreed defense spending goal of 2 percent of GDP, and Senator Sanders in his remarks was clearly implying a willingness to take a tougher approach to “free riders.”

The other end of the political spectrum has provided a much more direct challenge, opening for the first time since the fall of the Soviet Union the idea that NATO may no longer be necessary. Speaking to the Washington Post in recent months, Donald Trump remarked, “We certainly can’t afford to do this anymore . . . NATO is costing us a fortune.” In April Trump told a crowd in Racine, Wisconsin, that it’d be fine if NATO were to dissolve. “We are protecting them, giving them military protection and other things, and they’re ripping off the United States,” he asserted, saying they had to pay up, “and if it breaks up NATO, it breaks up NATO.”

The notion that the United States is getting a bad deal or being ripped off echoes the leave campaign in substantial ways. “Remain” supporters were unable to convince the British electorate that the costs were worth the investment in Europe. Much like Donald Trump, “Leave” campaigners were willing to play fast and loose with the facts to stir up anti-Europe sentiment, for example with false claims that leaving Europe would put almost $460 million a week into the National Health Service. It is just the kind of rhetoric and fanciful promises that could turn members of the public against NATO.

Over just the past decade, Secretary of Defense Robert Gates, Secretary of Defense Leon Panetta, and Secretary of Defense Ash Carter have all made high profile attempts to cajole European allies to meet their defense spending commitments, with Gates offering the frankest assessment back in 2011: “The blunt reality is that there will be dwindling appetite and patience in the U.S. Congress — and in the American body politic writ large — to expend increasingly precious funds on behalf of nations that are apparently unwilling to devote the necessary resources or make the necessary changes to be serious and capable partners in their own defense.”

Today, Europe’s low investment in defense is becoming political again, even as China’s rise and terrorism cause more fear among the American public than Vladimir Putin. Trade-offs needed to invest in competing U.S. priorities, like air and naval forces in Asia and counterterrorism capabilities, provide additional fodder for NATO critics. Were a candidate to decide to focus on NATO the way the leave campaign focused on the EU, the effects would be unpredictable at best.

At the most recent NATO summit in Warsaw last week, NATO officials attempted to address the real and perceived imbalances among the coalition by “naming and shaming” members across a range of metrics, including military capabilities, deployability and sustainability. This effort must continue if NATO is sustain itself against the twin currents of populism and nationalism that are currently sweeping across the globe. Achieving the minimum 2 percent of GDP investment by European states by 2030 will be too little, too late. Leaders need to develop a better way to describe the benefits of NATO to their citizens, especially in the United States. Americans increasingly believe Europe should handle its own problems—from Russian aggression to refugees and terrorism. Effectively connecting the importance of NATO as a zone of peace and prosperity that is critical to each member’s own defense will be imperative. In a world increasingly plagued by failed states and collapsing political orders, the NATO community represents a welcome zone of peace and stability that its citizens will value, but only if their leaders actively engage with them and deal with concerns about waste and inequitable burdens.

For now, in a post-Brexit environment, NATO’s strength provides some succor for rattled leaders and people worried about an uncertain future. But it is not immune from the fractures plaguing the EU. In our current global environment, multilateral institutions in all their forms—whether they be trade deals such as TTIP and TTP, transnational or international organizations like the EU or UN, or a proven military alliance like NATO—are increasingly under threat from the very polities they are intended to benefit.

If NATO leaders rapidly address the need to build confidence and stave off threats from populism and isolationism, they can be sure that the alliance will be stronger and have a bright future as Admiral Stavridis and others have suggested. Brexit has taught us all, however, that there is no time to waste.