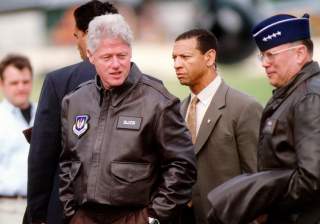 Two decades after the debate about NATO enlargement pitted “NATO-firsters” against “Russia-firsters,” both sides have had reasons to say, “I told you so.” And they did. But with Russia and Ukraine poised to go to war with each other, it doesn’t really matter that they did. Little can be done about the escalating crisis in Eastern Europe, even though it was predictable and predicted.

NATO-firsters had a sound argument on their side: the Cold War is over. Europe is at peace. The Soviet threat is no more. Central Europe, that graveyard of European empires, needs help transitioning from its Communist interlude to market democracy. Unless NATO helps and takes the region under its wing, old habits will reemerge and Central Europe will once again get mired in its old internecine rivalries endangering the hard-won peace. NATO has to take the region under its wing; it has to admit new members. Otherwise, the alliance will stagnate and die.

But, Russia-firsters countered—Russia will not like it; not now, not ever. Russia is weak now and cannot do much to oppose NATO enlargement, but once it recovers a measure of its strength, it will act to counter any expansion. Russia is more important to Europe and the United States than Central Europe, and it makes much more sense to work out the terms with Russia than to make Central Europe happy. Besides, they added, it makes as much sense for an alliance in trouble to take on new members as it does for a couple having matrimonial difficulties to have more children in the hope of saving the marriage.

NATO enlargement, NATO-firsters replied, is not aimed against Russia. It is a move toward Russia, intended to bring the zone of stability and prosperity closer to its borders. Russia will eventually realize that NATO enlargement is beneficial and will accept it. And if it does not—too bad, it wasn’t meant to be. Expanding NATO now, while Russia is weak, is the right move anyway. It is a hedge against future Russian neoimperial resurgence.

More than two decades since the debate started, both sides can claim to have been right. Central Europe’s progress in the past twenty years has exceeded everyone’s expectations. The region is stable, democratic and prosperous, and fully integrated into NATO and the EU. NATO enlargement has paid off.

But Russia has not changed its view of NATO enlargement, which it has come to see increasingly as a move against, not toward it. Once it regained a measure of its strength, in the mid-2000s, Russia’s policy was subordinated to the goal of preventing NATO’s further expansion to Georgia and Ukraine. One hot war (Georgia), one covert war (Ukraine), two de facto annexations (South Ossetia and Abkhazia) and one de jure annexation (Crimea) later, Russia has made it clear that it intends to keep NATO out of its neighborhood.

Who was right and who was wrong? The two sides—NATO-firsters and Russia-firsters—will never resolve this argument. In part, this is due to the incompatibility of their views. For NATO-firsters, it is largely a matter of high principle. For Russia-firsters it is mostly a matter of geopolitics. Each side has ample evidence to back up its case. The crisis in Ukraine proves both of them right. To Russia-firsters, it is the fulfillment of their prophecy that Russia would never accept NATO enlargement and would eventually do all it could to resist it. To NATO-firsters, it is proof that Russia is incorrigible, and that Central Europe’s experience shows what alliance membership could do for Ukraine if only it could escape Russia’s clutches.

Could NATO have shut its doors to Central Europe in the mid-1990s and thus denied these countries membership in the West? Should NATO have tried to come up with a better alternative to itself, more suited to the post–Cold War era? And was it realistic to expect the self-proclaimed most successful alliance in history to disband itself upon declaring, “mission accomplished?”

Was it realistic to expect Russia, reeling from the trauma of the Soviet breakup and searching for a new identity amid domestic political turmoil and decline, to become a “normal” country, and embrace democracy and market as its new founding principles? Was it realistic to expect it to shed its historical baggage—its imperial past—and embrace NATO enlargement? The answers to all of these questions are self-evident, especially with the benefit of hindsight.

NATO is here to stay, as is Russia’s rejection of the alliance as the backbone of security and stability in Europe. This standoff does not signal the onset of a new Cold War. Both NATO and Russia have bigger and more immediate things to worry about—terrorist threats, nuclear proliferation, the rise of China, the Ebola epidemic, etc. But the vision of Europe whole and free, at peace with itself and its neighbors that NATO enlargement was meant to advance, is more distant now than it was twenty years ago.