NATO Funding Frustration Could Cause Friction in Europe 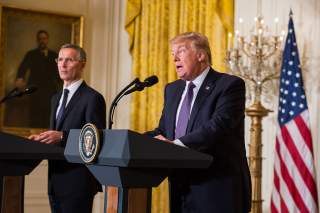 A former candidate for UK Prime Minister suggests that the United Kingdom could use its military to counteract Spanish attempts to influence the status of a British outpost. A major British newspaper adds fuel to that fire by arguing that the Royal British Navy could defeat the Spanish Navy should it come to war. When did this happen? 1805? Perhaps the 1760s?

No, this actually took place in 2017, over accusations that the Spanish were attempting to influence Gibraltar’s status post-Brexit. This spat serves as a grim reminder for the United States—it encourages European nations to spend more on defense at its own peril. The history of European military might is not a happy one, and the recent U.S. demand that European nations spend 2 percent of their GDP on defense to meet the NATO target could, in fact, harm U.S. interests.

Americans expect a baseline of unity among their Western European allies. They therefore assume that any European military buildup will help achieve U.S. strategic goals—confronting the Soviet Union and Balkan unrest previously or terrorism and a resurgent Russia today.

Yet diplomatic unity of purpose has always been the antecedent to military unity. Today, however, that diplomatic unity has dissipated. Brexit and the election of Donald Trump—who has expressed skepticism of NATO and the European Union—have highlighted the fragility of the European order. As Brexit negotiations continue, tension between European powers will only grow, and it will become increasingly difficult for Europe to maintain a unified diplomatic front.

U.S. policy does not reflect this new disunited reality. Under the current U.S. outlook, the assumption is that Europeans agree on how to wield power while anti-EU and anti-NATO sentiments are secondary factors. This understanding explains the insistence of President Trump as well of Secretary of State Rex Tillerson and Secretary of Defense Jim Mattis that NATO members reach the 2 percent threshold.

The U.S. focus on burden sharing raises concerns primarily for two reasons. First, better military capability without proper coordination on its use would either be useless or could hurt European unity. For example, the United States has no stake in whether the United Kingdom can better deter Spain from interference in Gibraltar. If anything, the United States strives to minimize intra-NATO friction. U.S. leaders should only call for increased military expenditures if certain that they would serve U.S. strategic interests like deterring Russian aggression in the Baltic states or in the North Atlantic.

Second, increased burden sharing may actively hurt the cause of EU stability. Military buildup in Europe would sap the political capital and limit the nondefense spending options of establishment pro-American leaders confronting the gravest threat to the EU and U.S. power on the continent, the insurgent populist movement.

Many EU countries are in a cycle of elections that could be decisive for the future of Europe and the West. Dissatisfaction over lackluster economic prospects and opposition to immigration have powered anti-EU and anti-NATO parties like Marine Le Pen’s National Front and placed electoral victories within their grasp. Brexit proved that EU integration is neither inevitable nor irreversible. Now, populist parties are trying to follow the example and reshape Europe in a more nationalistic vision.

The example of Italy shows the potential dangers of prioritizing military spending. The country currently spends 1.1. percent of its GDP on military capabilities. It also boasts an 11.5 percent unemployment rate, (35.2 percent for youth), 1 percent GDP growth and a caretaker government following Matteo Renzi’s resignation. Spending toward the NATO target would divert resources and embolden the populist parties opposing the government. This budgetary trade-off suggests the fundamental calculation of burden sharing. Between a reliable partner or a 2 percent contribution, the United States will choose the former. The 1.1 percent of GDP military spending under Italian prime minister Paolo Gentiloni of the Democratic Party will always be preferable to 2 percent under Beppe Grillo’s Five Star Movement.

Caution in increasing military spending does not mean allowing partners to shirk collective responsibility indefinitely. It does mean abandoning the current approach. Secretary Tillerson’s ultimatum calling for spending increase plans before the May 25 NATO meeting is particularly counterproductive. If allies do not comply (which is likely given the unclear enforcement mechanisms), the disorganization will hurt U.S. and European credibility. If they do comply, the increased spending will force EU leaders to remove other pressing reforms from the priority list while handing populists additional electoral ammunition.

When political stability and economic growth return to Europe, leaders will eventually meet U.S. defense spending requests and the NATO 2 percent target. In 2017, however, restoring diplomatic unity and protecting the existing order against rising populism and anti-globalist sentiment should be the primary goals.

Edoardo Saravalle is a Researcher at the Center for a New American Security.