NATO: The Greatest Bargain America Ever Got 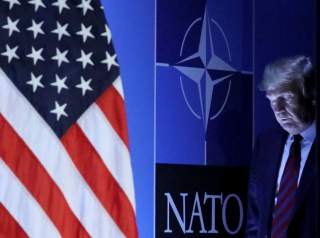 Everything Trump says about how our allies should spend more is right.

Everything he says about the North Atlantic Treaty Organization being a bad bargain is wrong.

What Trump wanted to achieve at the NATO summit—to get more defense spending out of the allies—is right. But if NATO didn't exist, Americans would all be wishing for the opposite—for the Europeans to be spending less on defense. This is because the United States would have to be hedge against their militaries again, the way Washington did before it got them into NATO.

In the pre-NATO era, defending against Europe cost America trillions of dollars, in today's dollars. It came to $4.5 trillion in the two world wars alone. That $4.5 trillion was taken out of an American economy that was only a fraction of today's size. If we employ the measure that economists often use—the amount that would be the same percentage portion of GDP today— the spending America did defending against the European powers that are now U.S. NATO allies would come to $40 trillion today. That is the same as $600 a billion a year for each of the 70 years that NATO has existed.

Instead, Washingon currently pays $600 billion a year for America’s entire global defense—at home, in Europe, in the Mideast, in Asia, and everywhere else.

That means Americans are actually saving several hundred billions a year. The savings can only be explained by the existence of NATO and its European subsystem, the EU. Together they have kept the peace among the European countries and kept them in a stable alliance with Washington.

Pre-NATO, in addition to the $40 trillion-equivalent America had to spend in war expenses, the United States also had peacetime expenses for securing itself against the European powers. Washington always had to plan its defense against the British navy. As recently pointed out in TNI, in 1920 the United States was contemplating war against Britain and Japan. War plans envisioned invasion of Canada, bringing long-term pacification problems. Japan would have probably taken America’s Pacific islands. In 1922, Washington counted it as a great success that it was able to head off that war and get Britain to agree to limit its navy to the same size as America’s, as long as the French and Japanese and Italians all kept theirs at a still lower level.

Today, thanks to NATO and to its sister alliances in the Pacific, America doesn’t count European or Japanese forces as potential threats to itself at all.  Instead, Washington is able to count the forces of these countries as a pure add-on to its own.

In the 1920s, there was no NATO and as a result Western countries were stuck with defending against each other. They weren't able to combine their forces and policies against the big new threat of Soviet Communism. This was why, after creating NATO, America tried to keep European forces down, not up. Today, if it weren't for NATO, Washington would still be calling on them to reduce their military forces, no matter how much European countries needed them against other, more logical threats, that range from Islamist terrorism to China. It was only when Washington organized NATO in 1949, and added Germany and Japan and Australasia into the alliance system a few years later, that the United States really stopped needing to hedge against these countries and started cheering on their militaries as additions to America’s own.

This add-on is no small thing. It comes to about $320 billion a year. That’s the amount that all of NATO, minus the United States, spends on defense.

That's a huge gift America gets from NATO. And Washington gets it for less than a penny on the dollar.

Averaged out over the decades, the United States get at least $620 billion a year out of NATO. Part of this is over $300 billion a year saved on spending that Washington otherwise would still need to do for defense against Europeans, and a $320 billion add-on to America’s spending through allied military spending.

What a rate of return! Washington gets about $1043 for every $1 it puts into NATO. Even the greatest deal-maker has to envy a deal like that.

“But, but” (I can hear some people chafing at the bit), “doesn’t America spend a truckload on keeping its army in Germany?” No, that truckload is spent on having America’s army in the first place, not on keeping it in Germany. Keeping some U.S. troops in Germany actually saves America money. The same goes for Japan. Washington would save even more money, if it stationed more troops in Germany and Japan. And America really ought to station more forces there. It would be both cheaper and more effective for U.S. security.

What would cost America more money would be to pull its troops out of Germany. Otherwise, the United States would lose the subsidy Germany pays Washington for them. And it would cost America still more when it would need to send them off to the Middle East in a crisis. Germany is a cheaper jumping off point for getting to the Mideast than Texas. And a faster one.

“But couldn't America keep its forces sea-based instead, and do 'offshore balancing' around the world?” That would cost Americans literally ten times more, according to military estimates, than the cost of basing them on allied land.

“But wouldn't the Europeans be defending themselves better if America didn't protect them with NATO?” No, they'd be defending themselves in the worst way they always used to—against America, against each other, and against everyone else. This would leave Washington with far more trouble to deal with, the way America used to have to before it formed NATO.

“But shouldn't the Europeans be spending more anyway?” Yes, they should. “Didn't they commit in NATO to 2 percent of GDP in 2006?” Yes, they did. America was able to get them to do that, because NATO exists. NATO makes itself available to America to put this kind of pressure on its allies. Without NATO, Washington couldn't have gotten any such commitment.

“Aren't they freeloading?” Yes. But better freeloading countries than countries America would have to hedge against as potential enemies. There are far worse things than freeloading. The United States needs to put as much pressure as it can to reduce the freeloading, without shooting itself in the foot and wrecking NATO over it. So far, it looks like that was avoided. If America wants to go further and insist on a final solution to the burden sharing problem, then it's long been known there's only one way to get that: an Atlantic Union with a common governing authority that has the power to tax all NATO countries all at the same rate for defense. Needless to say there's no need to explain what a long shot that is.

“But doesn't NATO create a danger that U.S. allies will drag America into wars that it didn't want and doesn’t need?” The opposite. Such a danger exists mainly when countries are not well-organized together as allies. America really did get dragged into wars in Europe before NATO. European wars were always spilling over into the Americas. There was the series of French and Indian wars. The Napoleonic wars brought America the War of 1812. In 1917 and 1941, the world wars of the European countries once again spilled over and dragged Americans in. There wasn't a NATO yet, to prevent the European powers from doing the things that led to these wars. Today, thanks to NATO, they all do their military planning together with the United States, and they haven't dragged Americans into any wars since NATO was formed.

“But if all that's true, then why does everyone say NATO costs America too much?” Good question. A lot of people hate NATO. It makes sense that people on the ideological Left hate NATO, since NATO strengthens American and Western power. It makes sense that liberals in the media and academia would follow after their more Leftist colleagues, but at a step removed, and merely call NATO “obsolete” and “too expensive”, instead of calling it evil. It makes less sense that some people on the Right would follow suit; but after half a century of the dominant media spreading myth as fact about NATO supposedly costing America gobs of money, it's inevitable that some people will be fooled.

“But then why should America be asking the Europeans to spend more on defense?” Because they get the same great bargain as the United States does from NATO. All of NATO’s members are spared from having to defend against each other. All of the members get the bonus of one another's forces as add-ons to their own. It's only fair for those members to share the bargain equally, though not because America is being hurt by its allies. After all, there’s no need to feel desperate about it. But increased spending is important because Washington has a right to push for fairness.