NATO Is Not Dying. It’s a Zombie. 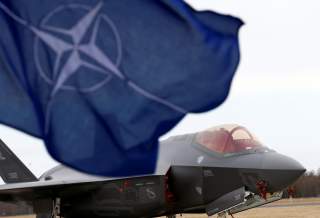 How do you know when a person is positively dead? Well, check for a pulse.

Walter Russell Mead checked the pulse of the Atlantic Alliance in a recent op-ed and concluded that NATO is dying. But Mead is wrong. NATO is simply a zombie periodically reanimated through various methods, usually voodoo magic.

Yet, reanimation has its limits. Even Zombies eventually die. With Georgia, a small state in the Caucasus Mountains that is wedged in between Russia, Turkey and Iran, lobbying hard to become NATO’s newest member, it’s useful to understand why.

When the life ran out of NATO with the demise of the Soviet threat, Sen. Richard Lugar was among the first to conclude in 1993 that NATO must go “out of area or out of business.” This proved to be a powerful infusion of voodoo magic that eventually took the form of  a U.S.-led NATO military intervention into the Balkans, which is where NATO sought to extend democracy at gunpoint to Bosnia-Herzegovina and Kosovo between 1994 and 1999.

Reanimation received a big boost with NATO’s 1994 “partnership for peace program.” Predictably, the Poles, Czechs, Hungarians and virtually everyone in Eastern Europe compelled to live under Soviet occupation after World War II lined up to become NATO partners. Why not? What East European State would not want a direct line to Washington, DC that promised military assistance against the Russian menace that all believed would inevitably return?

Domestic American politics also played its part. President Bill Clinton came out for NATO expansion during his campaign for re-election in October 1996. There was nothing sinister in it. Clinton was just cultivating the Polish and East European vote in the Midwest, stealing the issue from Senator Bob Dole who also ran on a NATO expansion platform.

Mysteriously, the promises given to President Mikhail Gorbachev by President George H. W. Bush, Prime Minister Margaret Thatcher, President Francois Mitterand, Chancellor Helmuth Kohl and their foreign ministers in 1990—not to expand NATO eastward; not to extend membership in the NATO alliance to former member states of the Warsaw Pact—were ignored.  Why was this important strategic commitment made by NATO’s key leaders to President Gorbachev ignored?

Well, in the 1990s, the Russian threat was nonexistent and there was no reason to suppose it would return. In addition, President Clinton and the Senators who were nominally in charge of overseeing the conduct of U.S. Foreign and Security Policy were mesmerized by the prospects of being on the right side of history and campaign donations.

Given the voracious appetite for cash in Congress the defense industries were clearly interested in NATO expansion and found ways to advocate for it. Weapons sales to East European nations invited to join NATO promised huge profits. Bruce Jackson, a Lockheed vice president from 1993–2002, rushed to set up the Committee to Expand NATO and reportedly used contributions from defense companies to lobby Congress for NATO expansion.

After 2001, just about anything could be and was characterized as an existential threat to the American People: Islamist Terrorism or the Global Caliphate, China, Iran, Venezuela, Cuba, and, by 2012, a resurgent Russia. Defense budgets rose and U.S. Forces were now in Africa, the Mideast, Asia and Eastern Europe. By the time President Obama completed his first term Moscow concluded that Washington’s expansion of the NATO Alliance combined with its open-ended presence in Afghanistan and the Near East was really a coordinated plan to make Russia's strategic situation untenable.

As George Kennan pointed out decades ago, the Russian sense of insecurity is profound. The Russian national temperament inclines to a siege mentality with a permanent enemy lowering beyond the walls. Right or wrong, President Vladimir Putin personifies this outlook.

President Putin tightened his grip on Russia’s 140 million citizens with laws and governance that offended Western sensibilities, but Putin’s policies arguably helped Russia to withstand the impact of damaging sanctions after its annexation of the Crimean Peninsula—a region that was under Russian control longer than Texas has been in the Union. Despite an economy that lags behind the Republic of Korea, a nation of forty-nine million, President Putin restored Russia’s military power and its national self-image to a formidable position.

Putin’s paranoia has led some observers to suggest that Putin is preparing Russia for a military showdown with the West. That’s an exaggeration, but it would be a mistake to doubt Putin’s resolve to protect Russia’s rights in its own hemisphere.

Now, Georgia is stepping up to join NATO. Georgia like Montenegro (and most NATO members) is in line to become another military protectorate of the United States, not an ally. Unless President Trump wants Moscow to conclude that Georgia will be a future platform for attack against Russia, Iran or another regional power, President Trump should just say “No!”

It’s time for the NATO zombie to expire. Charles De Gaulle was right, “England is an island and the United States is not in Europe.”

Army Col. Douglas Macgregor (retired) is a decorated combat veteran, a PhD and the author of five books. His latest is: Margin of Victory, (Naval Institute Press, 2016).