Is NATO Really Ready for a War? 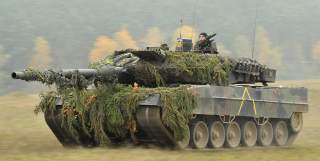 When Jürgen Bornemann was a junior army officer in West Germany’s Bundeswehr, he spent many months of every year practicing getting his unit from its base to likely conflict zones near West Germany’s border with East Germany. His unit was not alone. “Entire divisions were moved within West Germany,” Bornemann, who went on to become a lieutenant general and director general of NATO’s international staff, told me. (A division consists of some fifteen thousand soldiers.)

Practicing movements involving tens of thousands of troops towards potential hot spots was, in fact, a main component of NATO’s Cold War defense planning. “NATO was constantly practicing, fine-tuning deploying fifty thousand troops across the Atlantic and moving them across Europe,” said Ian Brzezinski, an assistant secretary of defense under George W. Bush. “It was a demonstration, but it was also a way of making sure the wheels were always greased.”

By comparison, today’s NATO troop movements look rather modest. Exercises are less frequent and typically involve brigade-size forces, around five thousand troops each. “In 2015 we had an exercise [Trident Juncture] that involved thirty-six thousand troops, but it took a long time to plan and only took place in Italy, Portugal and Spain,” Brzezinski pointed out. And as Bornemann notes, with many years having passed without large regular exercises, officers lack the knowledge of how to do it. They often lack the equipment, too. During the Cold War, Germany’s Deutsche Bahn kept thousands of rail cars available for Bundeswehr transportation. That’s no longer the case.

Equally worrisome is the speed at which the exercising troops advance. Referring to NATO’s Very High Readiness Joint Task Force, which consists of five thousand troops, a senior NATO official told me, “Sometimes we have ten nations participating. It’s not just a matter of the number of troops and vehicles moving. We have to be able to go from anywhere to anywhere. It’s extremely complex, whereas during the Cold War everyone knew which route they would be taking.”

Cold War NATO commanders also knew the specifics of every bridge, railroad, road, tunnel, airport and seaport on NATO territory. They could easily access the information in the alliance’s Capability Catalogues, a meticulously maintained encyclopedia that detailed every piece of infrastructure that could be used by the military. “But we let the Capability Catalogues go,” the NATO official told me. As a result, commanders have incomplete information about the infrastructure they need to use in order to move their troops. Though bridges and railroads may seem secondary, logistics is the pillar of any military exercise—and any military engagement.

Newer NATO member states’ capabilities never added Capability Catalogues, and were also left with Communist-era infrastructure. “Some of them have rebuilt their infrastructure in a lot of places where some of the older Allies haven’t, but some of the bridges in some of the former [Warsaw Pact] nations will probably need upgrading at some stage,” the NATO official said. “We’re talking sometimes seventy or eighty tons of armor, so you put that on top of a flatbed and then you’ve got the issues of going across a bridge.” Since the 2014 Wales Summit, NATO has again been collecting capability entries from its member states, and the official says the alliance is making progress towards a complete set of catalogues.

And troops need to regularly use the infrastructure. ”We used to move armor up from Greece into Kosovo and the Balkans, for example,” the NATO official pointed out. “It’s not new for NATO to be able to do that, we just need to get to where we were before in terms of being up to speed and having that situational awareness.”

In recent months, the alliance has made crucial progress in another area: border crossings. Until last year, many NATO member states didn’t issue automatic clearance to alliance troops entering their territory. Now that issue has been resolved.

Still, NATO is decidedly less swift than Russia, which can deploy tens of thousands of soldiers on several days’ notice—and has the advantage of large military bases not far from three NATO member states: Estonia, Latvia and Lithuania. By contrast, NATO’s best and largest armed forces units are based in western Europe, where the United States still maintains a respectable military presence.

That’s where NATO’s decisionmaking speed plays a crucial role. After the Cold War, decisionmaking power for NATO’s exercises shifted from commanders to the civilian North Atlantic Council, which operates at distinctly unmilitary speed. Military commanders have been aware of the problem caused by slow decisionmaking for a long time, but political decisionmakers have had their heads in the sand. Brzezinski said, “It’s changing now, but is it changing fast enough?”

It’s not just a valid question, but an urgent one, given Russia’s energetic exercise schedule and its military modernization, which includes new antiaccess/area denial (A2/AD) capabilities in the Baltic Sea region. A2AD slows an adversary’s advance by means of missiles and other air-defense weapons. Giving its commanders more power over exercises would make the alliance more efficient.

But how many NATO troops, accompanied by tanks and other equipment, should be moving across Europe in order to keep the wheels greased, and how often? Getting from five thousand to fifty thousand constantly exercising troops will be near impossible in the short term. “And the Russians would consider large exercises an escalation,” Bornemann warned. This year will, however, offer a good opportunity for NATO to show its teeth and speed. In September, Russia will again conduct a Zapad exercise, this time in the country’s west. Last year’s Zapad involved 120,000 troops. What if NATO were to conduct a similarly sized exercise at the same time?