NATO Revamped: Why the Alliance Needs to Change 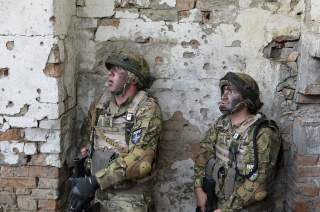 Last year, the Center for the National Interest partnered with the Charles Koch Institute to host a foreign policy roundtable. Among the topics addressed was: Has NATO outlived its usefulness to the United States? Click here to watch the rest of the videos in the “Allies and Adversaries” video series.

Michael Desch, professor of political science and director of the Notre Dame International Security Center, believes the North Atlantic Treaty Organization has outlived its original purpose to defeat the Soviet Union and should be put to rest. He explains, “This is the corpse of an international institution that’s become zombie-fied. It’s dead! But it continues to exist and chase after the living.” According to Desch, NATO’s confounding factors are the amount of resources the United States spends on the alliance and the “moral hazard” of maintaining a permanent attachment to European countries that may no longer share our interests.

While Desch came out strongly in favor of ending the alliance, other scholars still see the security alliance’s value—although not in its current form. Author and historian Andrew Bacevich notes that NATO “ought to do what it was founded to do, which is provide for the security of Europe. It’s just that what is different today than back in 1949 is today the Europeans are fully capable of taking responsibility for their own security.” After all, the United States spends more than 3.5 percent of its GDP on defense, whereas the median defense expenditure of European NATO countries is a mere 1.18 percent of GDP. Bacevich believes the United States could foreseeably exit NATO if it gave its European partners approximately ten years to take charge of the alliance.

Richard Betts from Columbia University takes a different tack on the usefulness of NATO. “NATO can be useful without being activist,” he claims. “The problem with NATO was the assumption that it had to do something after the Cold War, rather than stay on ice in case at some point in the future it … needed to be reactivated.” The University of Chicago’s John Mearsheimer agreed, calling the sentiment a “grow or die” perspective. In reality, says Mearsheimer, NATO expansion made the alliance worse off by antagonizing Russia. “It’s actually very strange,” added Eugene Gholz of The University of Texas at Austin. Policymakers “who in some circumstances say they don’t believe in deterrence anymore … really fundamentally believ[ed] that NATO would deter all bad behavior from Russia.”

Stephen Walt of Harvard University offered specific policy prescriptions that could lead to a better arrangement for NATO with a stronger European role. He suggests appointing a European Supreme Allied Commander (a position traditionally held by an American) and removing American troops from Europe. Walt notes that the United States could still be committed to defending Europe from an attack, but with a greater degree of operational flexibility. This sort of alliance would create “a fundamentally different arrangement than what we’re dealing with now, where NATO is basically a set of American security guarantees for a bunch of wealthy countries, and something we use to legitimize our various interventions in other parts of the world.”

NATO’s purpose changed drastically at the end of the Cold War, so it should come as no surprise that policy experts disagree on its continued utility. After all, debates over NATO’s usefulness are not new. Writing in 1951 as the NATO Supreme Allied Commander, Dwight D. Eisenhower remarked, “If in ten years, all American troops stationed in Europe for national defense purposes have not been returned to the United States, then this whole project [NATO] will have failed.”

During the roundtable discussion, the Cato Institute’s Christopher Preble echoed Eisenhower’s concerns, noting, “We didn’t really want the Europeans in the late ’40s, early ’50s to be spending a lot of money on the military. Now, the deal is we agree to defend them and they agree to let us. But it doesn’t seem like a very good deal for us.”

The debate over NATO’s usefulness for the United States and its role in preserving European security is far from over. Watch this video and the rest of our “Allies and Adversaries” video series to better understand the United States’ relationships with its allies.