NATO and Russia Return to the Nuclear Precipice 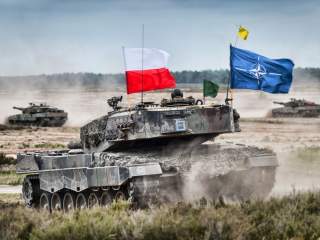 In one year’s time, it is possible that Donald Trump will be sitting in the White House. Across Europe, too, nationalist leaders are on the rise.

What are the security implications of these developments?

One of the most pressing threats to European security is a belligerent Russia, willing to use armed force and breach the sovereignty of other states in defense of its interests.

Despite encouraging signs of cooperation in Syria, both NATO and Russia now risk cementing a deeply hostile and overtly nuclearized confrontation over Ukraine and the “post-Soviet space.”

The most likely flashpoint for a confrontation with Russia is the Baltic. This was the assumption behind an alarming drama that the BBC aired in February, World War Three, in which former British officials conducted a simulation involving a Russian plot to support ethnic Russian separatists in eastern Latvia. The exercise ended with a full-scale nuclear conflict.

NATO has decided to beef up its presence in the Baltic states, to demonstrate that it has a “credible commitment” to defend member states under Article V of the NATO charter.

In 2014 the United States launched the European Reassurance Initiative, which involves rotating U.S. brigades to Poland and the Baltic states, forward positioning of military equipment, and military aid. Last month U.S. defense secretary Ashton Carter proposed boosting the initiative’s funding from $789 million to $3.4 billion for FY 2017. (The increase is subject to congressional approval.)

In both Russia and the West, we see a re-nuclearization of defense planning, driven by worst case scenarios. This is stoked by all the loose talk of a “second Cold War,” which encourages each side to view the other as implacably hostile, duplicitous and dangerous. UK defense secretary Michael Fallon said last year that Moscow had “lowered the threshold” for nuclear use after Crimea, and that this validated the modernization of Britain’s nuclear arsenal. UK officials have urged NATO to reinstate Cold War planning exercises, to transition from conventional to nuclear warfare.

Such actions and statements raise the possibility of nuclear war in Europe as commensurate with the interests at stake.

Both sides use displays of military prowess to signal their resolve to the other side. In 2007, Russia resumed the Cold War practice of strategic bomber patrols along NATO borders. In 2009 and 2013, they ran exercises simulating a conventional invasion of Poland. Such actions could be misinterpreted as signs of intent to start a war—especially in a time of political crisis. Putin’s enthusiasm for macho posturing has resulted in what Alexander Golts described as “nuclear euphoria.”

NATO finds itself in a classic security dilemma, where defensive actions by one side are seen as a threat by the other, triggering an escalating cycle of action and response.

NATO seems to be underestimating Russia’s willingness to escalate. Whether it be assassinating opposition leaders abroad, shooting down civilian airliners or bombing Syrian hospitals, Putin appears indifferent to the collateral damage caused by his military assertiveness. The Iraq War and “color revolutions” that started in 2003 have fueled Russian insecurity, and apparently convinced Moscow that the United States is bent on “regime change” in Russia, if not the breakup of the Russian Federation itself. In the face of such an existential threat, any measures are justified.

In contrast to Putin’s resolution, NATO threats lack credibility. No one seriously believes that NATO would risk a nuclear attack on a Western city in order to defend Daugavpils. (If you don’t know where that is, that proves the point.) Russia’s own military doctrine states that if it found itself losing a conventional war, it may use nuclear weapons to defend Russia’s security. NATO, too, has a nuclear doctrine that does not preclude first use in a conflict.

Just because nuclear weapons were not used during the Cold War, we cannot complacently assume that “deterrence works.” There were several incidents where humanity came perilously close to the nuclear brink, from the 1962 Cuban Missile Crisis to NATO’s Able Archer exercise in 1983, which Moscow thought was a prelude to war. Our reliance on nuclear deterrence to preserve peace was what economist Carl Lundgren called a “desperate gamble” given the risks involved.

Acknowledging an overriding common interest of avoiding nuclear war is not an exercise in appeasement, being an apologist for Moscow’s actions or downplaying the significance of Russia’s recent threats and actions. It is a recognition of the reality we find ourselves in. We must think seriously about what Moscow expects to achieve, how we understand European security in the long term, and how we might respond with both resolve and reassurance.

Reciprocating Russia’s nuclear messaging will only lead us further down the escalatory spiral. Both sides must take steps to reduce the salience of nuclear weapons and reliance on nuclear threats as part of their defense strategies. There must be a follow-on to the 2010 New START agreement and the Cooperative Threat Reduction program, which expired in 2012, and resolution of mutual accusations of violating the 1987 Intermediate Nuclear Forces Treaty.

Perhaps we are wrong in our analysis, and Putin is much more risk-averse that we are suggesting. But the cost of making the wrong call on this issue is astronomically high. The primary threat here is not Vladimir Putin’s “hybrid” war, but the danger of conflict spiraling into nuclear violence.

At the time of the March 2014 annexation of Crimea, Putin’s chief propagandist, Dmitry Kiselev, boasted on TV that Russia is the only country that can reduce American cities “to radioactive ash.” He forgot to mention that Russian cities would suffer the same fate.