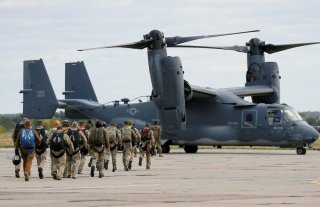 Unfortunately, the actions of subsequent foreign policy teams with respect to Georgia, and even more so with respect to Ukraine, indicate that U.S. leaders learned nothing from the mistakes in 2008. Officials in both the Trump and Biden administrations have treated Kiev as a de facto NATO member and a crucial U.S. military ally. Trump’s administration approved multiple weapons shipments to Kiev, sales that included Javelin anti-tank missiles that Russia considers especially destabilizing. Such transactions have continued since Joe Biden entered the White House.

Worse, Washington’s security relationship with Kiev goes far beyond arms sales. Over the past five years, U.S. forces have conducted multiple joint exercises (war games) with Ukrainian units. Washington also has successfully pressed NATO to include Ukraine in the alliance’s war games. Indeed, Ukraine hosted and led the latest version, Rapid Trident 21. It is no secret that such exercises are directed against Russia. In early April 2021, Biden assured Ukraine’s president, Volodymyr Zelenskyy of Washington’s “unwavering support for Ukraine’s sovereignty and territorial integrity in the face of Russia’s ongoing aggression.”

Such a pledge places the United States in a very dangerous situation. Kiev seeks to regain Crimea, which Russia annexed following U.S. and European Union backing for demonstrators who overthrew Ukraine’s elected, pro-Russian president in 2014. Indeed, Zelenskyy and other Ukrainian officials have expressed that intention repeatedly and in diverse settings. Kiev’s behavior also has become disturbingly bellicose. In early April 2021, both the Zelenskyy government and NATO complained loudly when Russia moved some 80,000 troops and heavy weaponry closer to Crimea and other areas along the border with Ukraine. What they did not mention, and most Western press accounts also ignored, was that Kiev had previously executed its own military buildup, amid statements of a determination to regain Crimea. In any case, an extremely tense confrontation between NATO and Russia ensued, which was not resolved until Russia pulled back its forces in late April.

Given the size of its territory and population, Ukraine is not in the same category as the Balkan and Baltic mini-states or Georgia. However, it has an even greater potential to entangle the United States and the rest of NATO in a perilous war. The April 2021 episode was a classic case of a security client behaving in ways that could trigger an armed conflict. For all of Kiev’s boasts about regaining Crimea, the outcome of a military clash between Russia and Ukraine would be a foregone conclusion. Ukraine would have no chance of prevailing without massive outside assistance. Even disregarding the crucial difference that Russia possesses a strategic and tactical nuclear arsenal, while Ukraine does not, Russia’s advantages in conventional forces are massive. Legislation that the Ukrainian parliament approved in July 2021 will increase Kiev’s armed forces to 261,000, but Russia fields more than 1 million active-duty personnel. Moreover, although U.S. aid has improved the quality of the hardware available to Ukraine, Russia’s troops are equipped with some of the most sophisticated weapons in the world.

U.S. leaders should be deeply concerned when a security dependent suffering from such quantitative and qualitative disadvantages makes empty boasts about retaking lost territory. It is even more worrisome when that client engages in provocative military gestures toward its powerful neighbor. That is precisely the way that a rogue dependent can entangle its great power protector in a disastrous war. U.S. leaders should want no part of such a risky patron-client relationship.

THE TEST of whether a specific country is a worthwhile U.S. ally or a useless, perhaps dangerous, dependent should not be terribly difficult. A key question that must be asked is: Does that country substantially add to America’s own economic and military capabilities without creating significant new dangers or vulnerabilities? Only if that question can be answered with an unequivocal “yes,” should the country be considered a beneficial ally. Otherwise, it is either a useless or (even worse) a dangerous security client. U.S. leaders badly need to learn the difference. As a result of NATO’s expanded membership and mission, the United States has acquired a worrisome number of both types.

Ted Galen Carpenter, a senior fellow in defense and foreign policy studies at the Cato Institute and a contributing editor at the National Interest, is the author of twelve books and more than 950 articles on international affairs. His latest book is NATO: The Dangerous Dinosaur (2019).