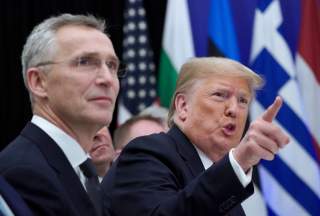 The recent NATO Leaders Meeting in London sparked a lot of debate about the relevance of the alliance in the twenty-first century.

President Donald Trump and French president Emmanuel Macron have urged the alliance to focus more on terrorism. Others have called for China to get on NATO’s agenda.

Southern European members see the instability in North Africa and the flow of refugees as the main threat. Turkey’s primary concern is about terrorist groups operating just across the border in Syria. Eastern Europe, of course, perceives Russia as the main threat.

NATO Secretary Gen. Jens Stoltenberg has done a balancing act trying to address all the different security and threat concerns held by the alliance’s twenty-nine (soon to be thirty, when North Macedonia officially joins) members.

In London, they not only talked about China, but they also went so far as to release a declaration that China poses challenges for NATO. This was a first.

In another major development, members added space as a new domain—alongside air, land, and sea—for which NATO must plan.

The alliance also announced that there will be a “reflection process” to chart out a future path for the organization.

So does NATO have a mission in the twenty-first century? Absolutely. All policymakers have to do is look back at the alliance’s founding document, the 1949 North Atlantic Treaty.

As an intergovernmental security alliance, NATO is only as strong as its member states. European countries collectively have more than two million men and women in uniform, yet by some estimates, only one hundred thousand of them—a mere 5 percent—have the capability to deploy outside national borders. Just nine of NATO’s twenty-nine members spend the required 2 percent of the gross domestic product on defense. Germany, Europe’s largest economy, spends only 1.3 percent. Frankly, this is pathetic.

While the original 1949 treaty does not mention the 2 percent benchmark (something agreed to much later) there is a requirement to maintain the capacity to resist armed attack. Article 3 states that members will, at a minimum, “maintain and develop their individual and collective capacity to resist armed attack.” Not many NATO members can say they are living up to this commitment, which still applies today.

Trump did a notable job of raising the issue of European defense spending, and his message has been echoed by senior U.S. officials. Reaching the 2 percent benchmark requires a political, economic, and societal will to invest in defense.

Trump should continue to address this directly with his European counterparts to spur them to meet their Article 3 requirements.

In 1949 and throughout the Cold War, NATO’s mission was to deter and (if need be) defeat the Soviet Union and the Warsaw Pact, to protect the territorial integrity of its members, and to stop the spread of communism in Europe. Although the nature of the threat might have changed, the threat itself has not gone away.

While those in western Europe seem to find it hard to believe, NATO’s easternmost members face legitimate security threats from Russia. NATO members that lived under the iron fist of the Warsaw Pact or were outright absorbed into the Soviet Union after World War II see Russia’s bellicose behavior today as an existential threat. Even though the Cold War is over, there is still plenty for NATO to do to defend against twenty-first-century threats in the North Atlantic region.

NATO’s open-door policy for qualified countries has contributed greatly to transatlantic security since the first round of enlargement in 1952. It has helped ensure the alliance’s status as the prime guarantor of security in Europe. Article 10 states that any European state “in a position to further the principles of this Treaty and to contribute to the security of the North Atlantic area” can be invited to join the alliance.

Montenegro most recently joined the alliance in May 2017. North Macedonia will soon be the next to join. Two official candidates for membership—Bosnia and Herzegovina and Georgia—are waiting in the wings. In the longer term, there is the expectation that Ukraine will join.

Although some members, such as France, want to slow down or even stop the enlargement of the Euro Atlantic community, NATO should continue to use its open-door policy to promote democracy, stability, and security in the North Atlantic region.

While it is important to constantly review new threats and challenges faced by the Alliance, NATO should not forget it past.  Instead of being a “solution looking for a problem,” NATO should get back to the basics of its founding: the territorial defense of its member states.

Since its creation in 1949, NATO has done more to promote democracy, peace, economic prosperity, and security in Europe than any other multilateral organization, including the European Union. It is essential that the United States continues to be an active participant in the alliance’s future. During the upcoming “reflection process,” NATO should first reflect on its past to help better understand its future.