NATO's 5 Most Lethal Weapons of War 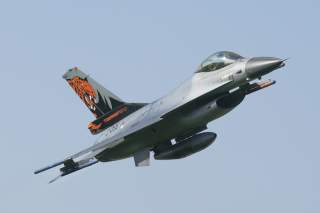 The North Atlantic Treaty Organization was formed on April 4th, 1949. A political military alliance, it was the result of Cold War tensions between the United States and Western Europe on one side and the Soviet Union on the other.

The continued stationing of large amounts Soviet forces in Eastern Europe made a common defense organization necessary. It was also a way to keep the United States and Canada engaged in the defense of Western Europe from the outset of any conflict, furthering the alliance’s deterrent value.

Article 5 of the NATO charter is the real meat of the alliance agreement. An attack on one member is considered an attack against all. Interestingly, although Article 5 was long associated with a possible Soviet attack on Western Europe, the only time it was invoked was after the September 11th attacks.

The NATO alliance has sought to standardize on a variety of military equipment. Ships, aircraft and armored vehicles are often purchased by multiple NATO member countries. Rifle magazine designs are standardized for interoperability purposes, so that a British SA-80 rifle will take magazines from an Norwegian Heckler and Koch 416. Tank main gun ammunition, machine gun ammunition, artillery and mortar rounds are all standardized. Here are some of the alliance’s most lethal combat systems, each operated by two or more member states.

If there was ever a common NATO fighter aircraft, the F-16 is it. Belgium, Denmark, Greece, the Netherlands, Norway, Poland, Portugal, Turkey and the United States all fly one variant of the F-16 or another. In the three decades since deliveries began each country upgraded their fighters at their own pace, leaving the NATO fleet widely varied in capability.

Originally conceived as a lightweight dogfighter with strong export potential, the F-16 has gradually evolved into a genuine multi-role fighter. Over its long career in NATO service, a Dutch F-16 shot down a MiG-29 in the Balkans, and Dutch, Belgian, Danish and Norwegian F-16s have bombed targets in the Balkans, Afghanistan and Libya.

The F-16 multinational development program was the F-35 Joint Strike Fighter of its time. Most NATO F-16 fleets will be eventually replaced by the F-35.

A self-propelled howitzer produced by Krauss Maffei Wegmann of Germany, the PzH2000, as it is known is one of the most modern artillery systems fielded by NATO. It replaced the American-made M109 in German service, and is currently fielded by Germany, Greece, Italy and the Netherlands.

The PzH2000 features a 155mm L52 howitzer. Howitzer barrel length is thus 52 times the diameter of the bore, in other words 8.06 meters long. A crew can fire a burst of three rounds in nine seconds, but that rate is unsustainable over the long term due to barrel heating issues. A rate of about ten rounds a minute is however sustainable, and effectively offers triples the firepower of the old M109. The rapid rate of fire of the PzH2000 makes Time on Target (TOT) barrages by a single howitzer achievable.

Only 1,450 tons surfaced, the 212 is a small submarine operated by a crew of less than thirty. Despite the 212’s small size it has a very long patrol range of up to 15,000 kilometers surfaced or between 780 and 3,000 kilometers submerged, depending on speed. The 212 in German service is armed with the DM2A4 “Sea Hake” heavyweight torpedo, while those in Italian service are armed with the “Black Shark” torpedo.

The German Bundesmarine is taking delivery of at least six Type 212s, while the Marina Militaire will take four.

Colt Canada—a division of Colt’s Manufacturing Company—builds small arms based on the M-16 pattern for Canada. Unlike its parent, Colt Canada has managed to build a following among NATO countries. Canada, the United Kingdom, the Netherlands and Denmark all equip their armed forces with Colt Canada rifles.

The main rifle, the C7A1, is a variant of the M16A3. It has the same twenty inch barrel as the M16A3, and has provisions for semi-automatic and fully automatic fire. (The Colt M16A2, on the other hand, can only fire semi-automatic in three-round burst.) A second rifle, the C8, substitutes a shorter-length 14.5” barrel and is very similar to the U.S. Army and Marine Corps’ M4 carbine. Rate of fire for both guns is identical at 750 to 950 rounds per minute, and the guns can be fed from NATO standard 30-round magazines.

The FN MAG was developed by Fabrique Nationale of Belgium in the early 1950s, just as armies around the world were waking up to the general purpose machine gun concept. The MAG was adopted by almost all of the NATO countries, including Belgium, Canada, Denmark, France, Greece, Luxembourg, the Netherlands, Norway, Turkey, the United Kingdom and even the United States. Rate of issue is at the platoon and squad levels.

The twenty six pound weapon system fires 7.62-millimeter rounds from linked belts. Rate of fire is 650 to 950 rounds per minute, and the MAG has a quick change system for replacing overheated barrels. The weapon can be fired from the prone position, hip, on a tripod, or mounted on helicopters and armored vehicles.

Despite being nearly seventy years old the MAG is still in production and shows no sign of slowing down, with only slight improvements made to reduce weight.