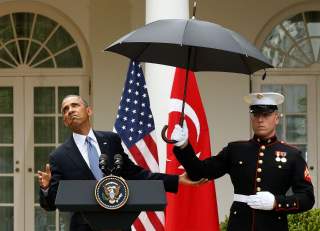 What if there was a major Palestinian uprising and nobody came? In the seventy years since the founding of the state of Israel, it has been the standard operating procedure for any Israel-Palestinian clash to be met with swift condemnation (and sometimes outright conflict) by the Arab states, and a wave of international outrage against Israel, typically by the United Nations.

However, following last month's massive protest in Gaza against Israel's border fence, in which dozens of Palestinians were killed and thousands wounded, the loudest voices of condemnation seemed to come from American pundits and politicians eager to blame the violence on Donald Trump's decision to move the U.S. embassy from Tel Aviv to Jerusalem. The Arab League and UN? Not so much. Aside from the usual criticism of Israel's use of "excessive force," there were few complaints about Israel by the Arab countries, and certainly nothing to match the degree of America's UN ambassador Nikki Haley's defense of Israel and condemnation of Hamas.

Now, Americans can—and should—place Mr. Trump's Middle East policy, along with all of his other policies, under intense scrutiny. After all, he is a political and policy amateur, who oozes recklessness in his private and public lives.  But the U.S. also has to ask itself: how did we get here? Not just with Donald Trump as president, but also with the world he bestrides so seemingly upside down. Pick any region of the world, and odds are it's wrestling with strange new challenges—from hydrogen bombs on the Korean Peninsula to the refugee crisis (and related populism) in Europe, to ISIS offensives in Afghanistan, and to Arab states sitting idly by while Jerusalem becomes permanently Jewish.

The world is, of course, a complicated place. And no single American president can get all the credit or blame for the inevitable ups and downs of world affairs. But there is just no denying that the foreign policy program of the prior Obama administration, despite its best of intentions, has played a crucial, and often decisive, role in today's global upheavals.

The question now is whether a maverick like Trump can effectively navigate this post-Obama world. Though a maverick mentality may be useful to confront the effects of Obama’s more glaring missteps, the challenge will be to ensure he does not contribute reckless missteps of his own. Additionally, can Trump eventually return a measure of pragmatic stability to America’s role in the world?

How Did We Get Here?

The Sunni Arabs turning a relatively blind eye to Palestinian deaths in Gaza and an American embassy in Jerusalem is a monumental change. Or, at least, it appears that way until we place it in the context of Obama’s foreign policy—whose goal was to reduce America’s footprint in the region; build up Shiite Iran as a regional power to counterbalance Sunni autocracies like Saudi Arabia and Egypt; and to rethink America’s knee-jerk support for Israel.

These were certainly understandable shifts in policy—the Mideast has long been a millstone for American foreign policy, oil-filled quicksand where policy options typically range from bad to worse. But under Obama things quickly bottomed out. For instance, his hasty withdrawal of U.S. troops from Iraq in 2011 helped spark the rise of ISIS, and his decision to end support for Egypt's Hosni Mubarak and rally behind the Muslim Brotherhood ended with a humiliating military coup in 2013. Furthermore, Obama's failure to act in Syria invited massive Russian and Iranian influence in the Eastern Mediterranean and his nuclear deal with Iran sent Arab states scrambling to consider their own nuclear programs and rapprochement of sorts with Israel.

It's hard to imagine members of Obama's foreign policy team believing their Mideast strategy—a core part of what they liked to call Obama's "long game"—would end up emboldening Israel and leaving Palestinians virtually friendless in the region. But that is precisely what happened even before Trump formally announced his decision to move the U.S. embassy to Jerusalem in 2017. Already leading Arab governments were secretly conveying acceptance of Israel's claim to all of Jerusalem, and quietly urging Palestinians to accept Ramallah in the West Bank as their eventual capital instead of East Jerusalem—something once utterly unthinkable.

In fact, massive unintended consequences like this were often the rule rather than the exception of Obama's foreign policy. Take for example the 2011 Libya intervention. What began as a limited humanitarian mission authorized by the UN, ended with France and the United States assisting rebels locate the fleeing dictator Muammar Qaddafi, who was then brutally executed on the side of a road. For an administration that supposedly operated under the motto "no more Iraq's," the regime change operation in Libya was positively startling.

More impactful, though, were the Libyan intervention's effects on global peace and security. Chaotic post-Qaddafi Libya became a base for refugee migration to Europe in the mid-2010s, opening another host of problems. Moreover, the Libyan operation itself severely damaged vital norms of world affairs regarding humanitarian intervention and nuclear non-proliferation. Qaddafi's death, for example, led UN Security Council members Russia and China to declare they would block any future humanitarian missions that might become a "replay of the Libya scenario," thus perhaps permanently wounding the UN's so-called "Responsibility to Protect" doctrine.

The harm to non-proliferation was more subtle but no less consequential. America’s leadership in the toppling of a regime which just eight years earlier had agreed to dismantle its entire nuclear program in exchange for peaceful international engagement has made similar future deals nearly impossible. Imagine the difficulty America now faces trying to negotiate similar “total disarmament” deals with Iran, North Korea, or any other regime determined to possess nuclear weapons.

The Obama team included human rights stalwarts like Susan Rice and Samantha Power, and Obama himself won a Nobel Peace Prize in 2009 for his "vision of a world free from nuclear arms". Yet, such a team left the White House with humanitarian rights and non-proliferation under greater strain than when they entered.

None of this is meant to minimize the dire global challenges President Obama faced upon entering office, including two extended wars in the Middle East, Osama bin Laden plotting his next move from Pakistan, and the worst economic crisis since the 1930s. He deserves enormous credit for helping stabilize the American and global economies and continuing to prosecute the war against terrorism effectively.

But Obama’s foreign policy vision inadvertently left the world in need of a serious clean-up operation. His vision was based on downplaying America’s role in the world (what one aide called “leading from behind”); welcoming new global and regional “stakeholders” like China and Iran; and patiently waiting out threats like Middle East chaos and North Korea’s nuclear program. That vision did not work.

The bad news is that fate, and America’s Upper Midwest, handed the clean-up job to Donald J. Trump. The good news, however, is that his foreign policy has not been nearly as reckless or world-shattering as many had feared—at least so far.

Yes, he has taken a dramatically different path than his predecessor. He has chosen, for example, a more bellicose approach toward North Korea and a softer one toward the Gulf Arab states. And, yes, Trump unraveled Obama’s two signature foreign policy accomplishments; the Paris climate accord and the Iran nuclear deal. Trump even walked away from the Trans-Pacific Partnership trade agreement.

But it is more typical than not for new presidents, particularly when they are of a different party, to take America in a new direction in foreign policy (think Reagan after Carter). And while some may have gotten comfortable with Obama's "no drama" style, there's little doubt a significant shake-up was needed due to populist discontent rising at home and new threats looming abroad.

The big question now is: will the Trump presidency be a bridge toward a more positive or negative recalibration of America’s role in the world. The jury on this will be out a while. However, with Trump just passing his 500th day in office, it’s not too soon to make a few assessments.

First, as with the Reagan analogy, Trump's more aggressive, hard-power approach to American diplomacy has been mostly met with concern that he's marching the U.S. closer to war. But just as Reagan's defense buildup and taunting tone toward the Soviet Union ("evil empire") led to conciliation, not conflict, so too might Trump's approach. This is most likely regarding threats like Iran and North Korea, who are otherwise trying to build nuclear missiles capable of reaching the United States.

Second, while relations between America and its traditional allies in Europe and Asia are surely being tested under Trump, initial fears he would create an isolationist “fortress America” have not materialized. In any event, with China and Russia both challenging the post-World War II global liberal order, and restless voters rising up across the West, new thinking will be needed to determine the best ways to protect and promote liberal principles moving forward.

It is doubtful any single U.S. presidency could accomplish all that. But the Trump administration's approach toward thorny issues like immigration, free trade, and global collective defense—however extreme or clumsy they often seem—might serve as the beginning of a challenging national conversation that ultimately leads American foreign policy (and America's global role) to a more stable and sustainable place.