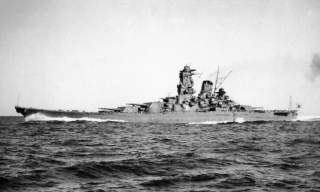 We will assume for our purposes that Germany would construct ships akin to the Bismarck and Tirpitz, and then deploy them to the Far East (in a shorter Great War, Germany might well have retained the naval base at Tsingtao). The long-legged German battleships, designed for raiding, would take to Pacific service well. We also assume that they represent the early stages of German fast battleship design, meaning that the more powerful ships will remain in the Atlantic.

As the clouds of war gather, Bismarck, Tirpitz, and a collection of smaller vessels (two heavy cruisers, six destroyers) abandon Tsingtao for the German naval base at Truk. With Kido Butai (the Japanese carrier force) engaged elsewhere, the Imperial Japanese Navy assigns HIJMS Yamato and HIJMS Musashi (with a similarly constituted support group) the task of catching and destroying the German ships.

The German squadron has a three-knot speed advantage, which it uses to try to pull away from the Japanese and avoid the engagement. However, the Japanese have a clear geographic advantage; the existence of relatively close bases means that they can station squadrons of older, smaller ships along potential channels of exit. Rather than fight with a collection of older battleships led by HIJMS Nagato, Admiral Lutjens decides to try his luck with the cream of the Imperial Japanese Navy. Lutjens wants to engage before dark, when he knows that the Japanese will have a significant tactical advantage, despite German radar.

The Germans open fire first, when it becomes apparent that they cannot escape the fight. Lutjens decides to attack before Japanese cruisers and destroyers can close into torpedo range; German intelligence is well-apprised of the capabilities of the Type 93 torpedo, designed to destroy and disable capital ships at a distance. Bismarck opens fire on Yamato and Tirpitz on Musashi, with Bismarck scoring an early hit on the Japanese flagship.

Before long, the Japanese begin to reply with their 18.1” guns. Both the Germans and the Japanese have excellent fire control, but the contest is unequal. The fifteen-inch guns of Bismarck and Tirpitz fire at a greater rate than the Japanese guns, but even when they hit, they do relatively little damage to the vitals of the Japanese ships (although they extensively scar the upper works). By contrast, the 18.1” hits begin to do serious damage immediately, plunging into the German ships at great range. Large and with effective subdivisions, neither German ship suffers lethal damage. However, before long both Bismarck and Tirpitz begin to lose speed, cutting off any chance of escape.

The battle between the smaller ships also begins to go the Japanese way. After a flurry of shellfire on both sides, the Japanese ships open up at range with their twenty-four-inch “Long Lance” torpedoes. Three German ships suffer hits, with a cruiser and a destroyer shearing out of line. Japanese gunfire slows the rest of the line, allowing several of the IJN’s support squadron to detach themselves and concentrate on the German battleships.

Increasingly accurate Japanese fire devastates the upper works of the German ships. With their speed advantage gone, the Germans find themselves in a slugging match with far larger, more heavily armored opponents. The Japanese advantages soon tell, and fire from both German ships becomes sporadic and inaccurate. The destroyers Yukikaze and Isokaze brave the secondary armament of the two German behemoths to close within torpedo distance, hitting both targets.

At this point, the situation becomes academic. The German ships lose the capacity to meaningfully engage the Japanese, and are subjected to withering fire from the battleships. Yamato and Musashi (both of which have suffered significant damage to their upper works and secondary armaments) close to point blank range. The remaining Japanese cruisers and destroyers, having disposed of their German counterparts, open up with their own guns and fire their remaining torpedoes. Still, both German battleships remain shockingly resistant to the damage inflicted by the IJN.

Two hours into the engagement, an explosion rocks Tirpitz; the crippled battleship soon capsizes and sinks. The Japanese concentrate their fire on Bismarck, which has slowed to a stop and ceased firing. An eagle eyed Japanese sailor onboard Yamato sees a German officer strike the ships colors, and miraculously, the order goes out across the fleet to cease firing. A boarding party from Yukikaze embarks upon the crippled German ship, followed by damage control parties from the rest of the Japanese squadron.

With the assistance of the surrendered German crew, the Japanese manage to get the fires and flooding under control. Yamato takes Bismarck under tow until tugs arrive. Although officially taken into IJN service, Bismarck never returns to combat status; the expense and difficulty of refit prove too much for the Japanese. Most of her crew survives the war, however.

Although large and capable of absorbing enormous battle damage, Bismarck and Tirpitz simply did not compare favorably with any other navy’s fast battleships. Yamato and Musashi, the largest and most powerfully built ships in history (although perhaps at some disadvantage relative to the American Iowas) utterly outclassed the German ships, and would have defeated them easily.

More importantly, the imperial ambitions of Kaiserine Germany are worth remembering. Both US and Japanese policy in the Pacific in the late nineteenth and early twentieth centuries (particularly the U.S. seizure of the Philippines) kept German regional ambitions firmly in mind. Japan entered the Great War against the Central Powers as a coalition partner; if the coalition had broken up, Tokyo might still have found reason to quarrel with Berlin.