Neither Candidate Scored Any Decisive Victory 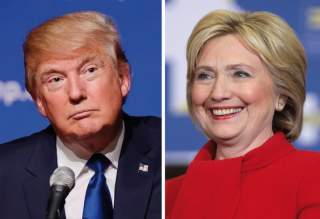 The second presidential debate between Hillary Clinton and Donald Trump on Sunday generated some truly ugly moments, in keeping with the discordant tenor and tone of the campaign over the past year or more. But it also generated some serious discourse on the state and direction of American politics at a time of political turmoil and anxiety. At debate’s end, it seemed an open question whether voters would be influenced more by the ugly moments or the serious discourse.

Hovering over the debate, of course, was the latest controversy surrounding the billionaire Republican, Trump, whose sordid musings about his relationship with women, captured on tape a decade ago, generated outrage and disgust throughout the political community and beyond in the 48 hours before the debate. Trump sought to blunt the controversy by dismissing his remarks as “locker room talk” and “just words,” noting he had apologized for them, and saying he was “not proud of it.” He added he had “great respect for women.”

Clinton dismissed that effort to dispense with the matter by saying the remarks demonstrated what she has been saying for months—that Trump is unfit for the presidency. “Yes,” she said, “this is who Donald Trump is”—and not only with regard to his attitude toward women but also toward minorities, handicapped people, POWs, and others. Americans, she said, faced the question, “Is this who we are?”

Clinton maintained a kind of smug smirk during much of Trump’s discourse and sought to dismiss him in the same manner she displayed to good effect in the first presidential debate. She said he engaged in “demagogic rhetoric” and “lives in an alternative reality.” She even attributed to Trump what she decried as an increase in schoolyard bullying—a phenomenon, she said, that teachers were calling “the Trump effect,” presumably a result of students watching Trump’s pugilistic approach to political discourse.

For his part, Trump displayed his penchant for nasty jabs, as when he said he was surprised to see Clinton’s erstwhile primary opponent, Bernie Sanders, endorse her—or, as he put it, “sign on with the devil.” Attacking Clinton for using a private email server during her days as secretary of state—and jeopardizing, as many see it, state secrets—he said as president he would instruct his attorney general to name a special prosecutor to investigate her. When she said it was “very good” that somebody like Trump wasn’t in charge of the country’s legal system, he shot back: “Because you’d be in jail.”

Beyond such political vitriol on both sides, though, a clash of political sensibilities and even ideas began to emerge. Trump rose above his stale first-debate performance, when he responded to her jabs with defensive and self-serving perorations and ignored opportunities to articulate his political outlook with some degree of coherence. Indeed, Clinton spent much more time on defense on Sunday than she had in the first debate, seeking to justify her actions in the lingering email scandal, defending President Obama’s increasingly unpopular Affordable Care Act, and clarifying her remarks before Wall Street bankers that seemed to indicate a practice of misleading voters about her true political intentions.

Further, responding to his suggestions that she hadn’t accomplished anything of note throughout thirty years of public life, she twice unfurled extensive litanies on her civic and political achievements over a long career.

More significant was the issue engagement on matters of serious national urgency and also the underlying views of the two candidates on the state and direction of American politics. Clinton billed herself as a seasoned and effective product of the political establishment who knows how to build upon the solid record of the Obama administration. She would fix things that needed to be addressed, she suggested, while keeping the country moving in essentially the current direction.

Trump vowed to toss aside the roadmap that got the country where it is today and set out in a wholly new direction. He described the country as facing dire threats and challenges in the realms of economics, trade, foreign policy, health policy and immigration. “We have a divided nation,” said Trump, citing racial tensions in Charlotte and Baltimore, increased murder rates in Chicago, and “violence in the inner cities.”

An example of this dichotomy in outlook involved Obama’s Affordable Care Act, often referred to as ObamaCare. “ObamaCare is a disaster, you know it, we all know it,” said Trump, who vowed to kill it and replace it with a system designed to introduce competition into the healthcare area, though he was vague on precisely how he would do it. That gave Clinton an opening to suggest he would “just turn it back to the insurance companies, like it was.” She advocated fixing it rather than ending it or replacing it.

Trump scored a point by retorting that her real aim was to address the plan’s current problems by turning it into a “single-payer system” run by the federal government, much like the current Canadian system, which has led to rationing and wait periods for medical attention. Canadians who can afford it come to the United States for healthcare, he said, because “their system is so slow.”

A similar dichotomy emerged on immigration, with Trump adhering to his call for “extreme vetting” before allowing Syrian and other Mideast refugees to enter the United States. He decried her suggestion that she would increase the refugee flow by 550 percent and called it “the greatest Trojan Horse of all time.” Clinton said that, “we need to do our part,” though she promised that she would insist upon “vetting that is as tough as it needs to be.” She said it was “unwise and even dangerous” to bar people from entering the country based on any kind of religious test.

Trump questioned Clinton’s seriousness on the issue by saying she had acquiesced as secretary of state when foreign countries refused to take back illegal immigrants in the United States who had committed serious crimes here. He also complained that the country was “letting drugs pour through the southern border at a record clip.”

Underlying these exchanges was a fundamental difference of outlook, with Clinton promoting open trade and open borders, as she told a group of bankers after leaving the State Department, and Trump wanting to protect the country’s borders from illegal immigration and manufactured goods that challenge U.S. employment.

On foreign policy, an interesting exchange occurred on the proper U.S. attitude toward Russia. It began when Clinton, seeking to parry questions about her private email server, noted U.S. intelligence suggestions that recent hacking of political institutions in the United States had been perpetrated most likely by Russians under direction of the Russian government. “We have never in the history of our country been in the positon where a foreign power has done so much to try to influence our elections,” she said, adding that they certainly weren’t trying to influence it on her behalf. She parlayed that into a call for Trump to release his tax returns to demonstrate that he doesn’t have business interests with the Russians (and hence a conflict of interest on the matter.)

Trump denied any such connection and accused Clinton of wanting to “always blame Russia.” He added, “I don’t know Putin….but wouldn’t it be great if we could get along with Russia?”

The Russians reemerged as a debate topic when the Syrian civil war came up. Clinton reiterated her resolve to impose a “no fly zone” if elected president. That, she said, would give her more leverage in dealing with the Russians in Syria and elsewhere. Trump dismissed that concept, saying Clinton was misguided in wanting to support Syrian rebels seeking to overthrow that country’s leader, Bashar al-Assad. “She doesn’t even know who the rebels are,” he said, alluding to the view that it’s nearly impossible to draw a distinction between dangerous Islamist groups such as the Islamic State, also called ISIS, and those considered to be more malleable pro-democracy rebels. He then decried her involvement in the overthrow and killing of Libyan president Muammar Qaddafi, which spread chaos through what is now a failed state.

When Clinton was asked if she would support U.S. ground troops in Syria, she disavowed any support for such an action. But of course the enforcement of a no-fly zone would require substantial troop strength around the area and could entail a direct military confrontation with Russia, which wouldn’t be likely to slink away from Syria with the advent of American belligerence.

The candidates clashed somewhat respectfully on the Supreme Court, with Clinton saying she wants the Court to stay with its pro-choice Roe vs. Wade decision and its recent “marriage equality” decision, while overturning the Citizens United case that liberalized campaign finance laws. Trump said he would appoint justices in the tradition of the late Justice Antonin Scalia, a staunch conservative whom Trump called “a great judge.” He particularly wanted the Court to protect gun rights under the Second Amendment, which he said was “under siege by people like Hillary Clinton.”

Thus did the candidates actually engage in some serious exchanges on serious issues. But the Trump imbroglio over his crude sexual comments of a decade ago and the tendency of these candidates to show their disrespect for each other in blunt and sometimes brutal ways marred the effort to place this debate on a consistently high plane of discourse. For Clinton, the aim was to keep voters focused on Trump’s character shortcomings sufficiently to override the widespread feeling within the electorate that the country is on the wrong track and suffering serious civic crises. For Trump, the imperative was to get past the episodes and personal conduct that have undermined his candidacy the past two weeks and get the focus back on the state of the nation.