Neo-McCarthyism Is Spreading Faster than the Coronavirus 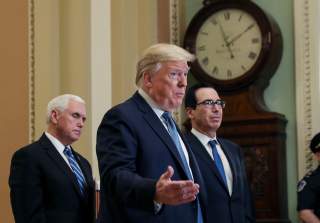 One might have thought that the failure of Special Counsel Robert Mueller’s investigation to sustain allegations of collusion between Donald Trump’s 2016 presidential campaign and Russia would have snuffed-out the growing neo-McCarthyism plaguing the foreign policy debate in the United States. Such optimism clearly was misplaced. Smears directed at analysts and political figures who favor a less confrontational policy toward Moscow predated the accusations against Trump, and they have persisted after Mueller issued his March 2019 report. Indeed, they show signs of intensifying and becoming even more promiscuous. Hillary Clinton’s ugly innuendo that presidential aspirant and fellow Democrat Rep. Tulsi Gabbard was a Russian asset is indicative of just how bad the intolerance of foreign policy dissent has become.

The drumbeat of allegations from the intelligence bureaucracy and its media allies about Russian activities designed to aid Donald Trump and Trump’s complicity in those activities has not abated despite the tepid outcome of the Mueller investigation and the failed impeachment campaign to oust the president. On February 20, 2020, yet another Russia-bashing story broke in the New York Times—this time about a classified intelligence briefing given to the House Intelligence Committee the previous week regarding Moscow’s continuing efforts to influence U.S. political outcomes. In a familiar pattern, other media outlets quickly picked up and amplified the New York Times story.

There was an especially disturbing undertone to the latest congressional briefing. The Times noted the intelligence agencies’ assertion the Russians were making “more creative use of Facebook and other social media. Rather than impersonating Americans as they did in 2016, Russian operatives are working to get Americans to repeat disinformation, the officials said.” There was more than a subtle innuendo that Americans whose arguments in social media posts regarding a particular issue parallel those Moscow has made are being willing or unwilling agents of Russian propaganda. It’s a position that implicitly maligns the judgment or loyalty (or both) of such Americans.

Once again, the mainstream media seems to be willing to assist intelligence officials by circulating the “Russia love Trump and vice versa” narrative. The overall media reaction to the New York Times story was not quite a feeding frenzy, but it was reminiscent of the long obsession with and promotion of the initial Russia collusion narrative. An article by CNN’s Stephen Collinson managed to recap virtually every allegation made about the Trump-Russia connection since the 2016 election, while asserting: “The President's defensive response to a new Russia interference drama, colored by his belief that all such revelations as a "Deep State" assault on his own legitimacy, already appears to be exacerbating the damage caused by Moscow's meddling.” Rachel Maddow seemed gleeful about the intelligence briefing and the revelations in the New York Times, “It is on!” she proclaimed on her MSNBC show, “Russia is running an op to try to help reelect Donald Trump in 2020.” She added: “Here we go again.”

A New York Times op-ed by Jonathan Stevenson, who served on the National Security Council staff during Barack Obama’s administration, charged that Trump’s appointment of Richard Grenell as Acting Director of National Intelligence reflected unsavory, pro-Russia motives. “Mr. Grenell, like Mr. Trump, does not rate Russian efforts to manipulate American elections a pressing national security concern. From this perspective, Mr. Grenell’s appointment as the country’s highest-ranking intelligence officer looks intended to ensure that any U.S. intelligence assessments and warnings of Russian meddling in the 2020 election are downplayed and withheld from Congress, if not completely suppressed.”

Drive-by smears accusing political or ideological opponents of having suspicious links to Russia have become a pervasive feature in America’s political process. At times, the accusations are so preposterous as to be almost comical—if it weren’t for their ugly echoes of McCarthyism. Senate Majority Leader Mitch McConnell’s critics have taken to calling him “Moscow Mitch.” Ironically, they do so even though McConnell himself has been alarmist about Vladimir Putin allegedly wanting to revive the Soviet Empire. He expressed that view explicitly in August 2018, saying “I think the Russians are acting like the old Soviet Union.”

But even such a neo-cold war stance was not sufficient to shield him from accusations that he does Russia’s bidding. To his opponents in the media and elsewhere, McConnell’s refusal to blindly endorse new “election security” laws and support the impeachment of Trump was sufficient to warrant denigrating his loyalty to the country. In July 2019, MSNBC’s Joe Scarborough asserted that “Moscow Mitch” McConnell’s “lack of action” on allegations of Russian election meddling was downright “un-American.’” Scarborough continued his indictment by accusing the majority leader of “aiding and abetting Vladimir Putin’s ongoing attempts to subvert American democracy.” The following month, House Speaker Nancy Pelosi used the same derisive nickname because of McConnell’s stance on election security.

When certain media representatives weren’t applying the Moscow Mitch label, they were ridiculing McConnell for protesting the smear. They were especially indignant about his accusations that using the term constituted McCarthyism. Washington Post columnist Dana Milbank stated that “McCarthyism, by definition, is a type of defamation using indiscriminate allegations based on unsubstantiated charges. But the allegations underlying Moscow Mitch are specific and well-substantiated. He has blocked virtually every meaningful bill to prevent a repeat of Russia’s 2016 election interference.” How that action automatically constituted treasonous behavior to serve Russia’s interests and did not merely reflect an honest policy disagreement, Milbank did not explain.

On another occasion, Milbank was even more explicit in his allegations of McConnell’s alleged servitude to Russia, flatly calling the Senate majority leader a “Russian asset.” He insisted that the harsh label was appropriate. “Russia attacked our country in 2016. It is attacking us today. Its attacks will intensify in 2020. Yet each time we try to raise our defenses to repel the attack, McConnell, the Senate majority leader, blocks us from defending ourselves.” Milbank went on: “Let’s call this what it is: unpatriotic. The Kentucky Republican is, arguably more than any other American, doing Russian President Vladimir Putin’s bidding.”

Milbank’s diatribe both exaggerated the significance of Russia’s “attacks” and impugned the patriotism and loyalty of a prominent political leader (and long-time Cold War hawk) simply for daring to resist policies that Milbank believed were important. If that line of argument doesn’t constitute McCarthyism, then it’s a terrific imitation. It also illustrates just how casual and strained the “Russian tool” smear has become. If that trend is not arrested, then the foreign policy debate in the United States will become even more timid and sterile than it was during the original McCarthy Era.