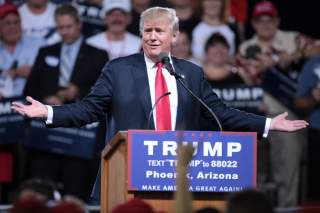 Oh dear. Neoconservative writer Bret Stephens has gotten himself into a slap fight with radio host Sean Hannity. After Hannity pre-blamed Republican leaders in the event that Donald Trump loses the election, Stephens took to Twitter where he crowned Hannity “Fox News’ dumbest anchor.” Hannity then rejoined that Stephens is a “dumbass.” If you’re not familiar with the combatants, one is a star-spangled vitriol merchant who keeps his audience in thrall with simplistic us-versus-them rhetoric and has at best a cartoonish understanding of foreign policy. The other is a nationally syndicated radio host.

Stephens is the same egghead who wrote that John Kerry “always had a terrific soft spot” for Bashar al-Assad, eighteen months after Kerry compared Assad to Hitler. Normally he isn’t worth the bandwidth, but his feud with Hannity merits a look because it’s illustrative of the poverty that’s afflicted the elite response to Trump. Stephens is peeved because Hannity keeps batting his eyelashes at the Republican nominee; his preferred approach is to ensure Trump gets crushed on Election Day so that “Republican voters learn their lesson.”

Fair enough, and plenty of conservatives apparently agree with Stephens, given that 21 percent of them now say they’ll do the unthinkable and vote for Hillary Clinton. But roughly 40 percent of the country is still in Trump’s corner—pulverizing them, wiping the dust off your sleeves, and returning to regularly scheduled business isn’t exactly a plan for long-term political success. So what pumps the veins of Trumpism? What’s driven so many voters into the arms of a bombastic populist? A scan of the Stephens corpus turns up only dismissive scoffs over Trump’s appeal to “the privileges of a white ethnic bloc” and to “vulgarian” voters who “comprise a significant percentage of the GOP base,” comments that would immediately draw accusations of racism were he disdaining black underprivileged communities or Democratic voters. And, of course, there's his customary endless flogging of “neo-isolationism.”

Stephens—and many other pundits—treat the rise of Trump as inorganic, an oddball electoral spasm that will disappear after it’s been suppressed. This is shallow analysis, to say the least. Properly classified, Trump is a nationalist reactionary, which means something preceded him to which he’s now reacting. Historically we’ve viewed reactionaries disdainfully, as antiquated holdouts uncomfortable with pluralism or multiculturalism or social progress writ large. And surely there’s some of that festering beneath the Trump phenomenon.

But those breezy dismissals make an integral error. They assume that right-wing reaction is always a deleterious force—and while it often is, politics is never quite that simple. The reaction against the American counterculture of the 1960s that elected Richard Nixon had a racial element, but it was also driven by an understandable weariness with that decade’s endless social unrest. Likewise, the nationalists who voted for Brexit were reacting quite rationally to a European Union that had gobbled up its member nations’ sovereignty and enervated their economic growth. Just as the proper response to the slogan “war is not the answer” is “that depends on the question,” the rejoinder to condemnations of reaction is “well, what are they reacting to?”

Even when reaction is unquestionably a corrosive force, that’s no guarantee that the forces it’s responding to are any better. The rise of Franco in Spain, for example, was made inevitable by an incendiary Spanish left that was sparking violent strikes across the country. When powerful Spanish socialist Francisco Largo Caballero declared, “I want a republic without class war, but for that one class has to disappear,” many took him at his word, and when the leftists won the election of 1936, those recommended by Caballero for disappearance—the military, the landowners, some of the middle class—fought back. The reactionaries went on to win the ensuing civil war and rule Spain until Franco’s death in 1975.

Donald Trump is not Franco and his enemies are not exclusively on the left. But the point is that reaction, whether in Spain or America, is more properly defined as counterreaction, a radical force that’s been incubated by an equally radical force. Upend the present and people will yearn for the past; sometimes they’ll even take drastic action to get it back. The radicalism to which Trump reacts has become institutionalized in Washington—call it neoliberalism or whatever you please, and it’s done a lot of good, opening markets, demolishing trade barriers, flattening the world. But as with all rapid innovations, it’s left a good number of people behind, and post-deindustrialization and post-recession, those stragglers are surmising that maybe we’ve changed too quickly.

This establishment radicalism has also manifested itself in our foreign policy. Following the attacks of September 11, Americans were presented with an unprecedented proposition: their country was now at war with extremist Islam, and the only way to win was not just to destroy terror cells, but to supplant the dictatorships of the Middle East with secular governments. This was as radical and utopian a vision as the Marxism that Franco believed threatened Spain, and it proved equally fleeting: shoving aside Saddam Hussein and Moammar Gaddafi created a safe space for terrorists, and today ISIS is the strongest jihad syndicate in the history of the world. The consequent string of high-profile attacks—the Bataclan in France, the airport in Brussels, the nightclub in Orlando—have underscored the omnishambles that is our past 15 years of foreign policy.

This is why, according to Pew Research, a majority of the public now says the United States should focus on its own challenges. It’s not an America First flash mob; it’s a rational if inchoate reaction to a discredited foreign policy that cost a fortune in money and lives, and diverted Washington’s attention abroad while internal problems festered. When Donald Trump maligns George W. Bush and Hillary Clinton for wrecking the Middle East, he gives voice to that sentiment. He’s no more radical or petulant than those who thought we could replace Saddam with Ahmed Chalabi.

Bret Stephens supported the calamitous 2011 intervention in Libya, thinks the United States should drop a bomb on Bashar al-Assad’s head, and defends the invasion of Iraq as a “classic police function” (which is a bit like calling Carthage a “model example of firefighting”). Today, he rages because Trump supporters aren’t using their library voices. Were he to take a break from hectoring the neo-isolationist tendencies of his tardy Comcast repairman, he might check a mirror and find a certain carrot-topped billionaire gazing back at him. Radicalism begets radicalism, and until that lesson is learned our politics will continue to whirl around the edges.

You can argue that it’s a malignant force—as this author has—but if you don’t understand the forces propelling the Trump phenomenon, you’ll never defuse it. Earlier this year, David Brooks wrote that Trump is “a lesson that I have to change the way I do my job if I’m going to report accurately on this country.” Neoconservatives like Stephens haven’t exhibited even that scintilla of self-introspection. They see Trump as an infestation that must be fumigated, even if it means voting for Hillary Clinton. But if Clinton wins, it’s not going to change the reality that Trumpism is popular, even if Trump himself is also despised by many. The sentiments that sustained him will linger.

By sullying our foreign policy, neoconservatives greased the cable on which Trump’s gondola is now ascending. As for Stephens versus Hannity, it’s little more than a lovers’ quarrel between two radicalisms—except that Stephens is eager to cover his with an establishment respectability.