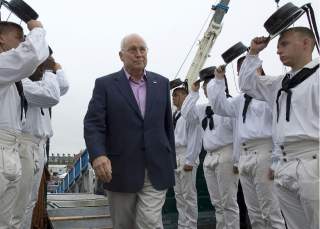 The stunning success of the Islamic State in Iraq and al-Sham has renewed American interest in a country where we fought almost continuously for over two decades before pulling the plug in December 2011. Suddenly, old debates have begun again and new ones have arisen as to "who lost Iraq" and what, if anything, the United States should do about it.

On our television screens and op-ed pages, some familiar faces and names have again been talking about Iraq, including former Vice President Dick Cheney, former Deputy Secretary of Defense Paul Wolfowitz and former Iraq Coalition Provisional Authority administrator Paul Bremer, along with various neocon pols and pundits who never went away. Some are now arguing that, having gotten Iraq so spectacularly wrong the last time, these people should not be listened to now. That idea is both misguided and dangerous.

In full disclosure, while I had an infinitesimal fraction of the impact on the public debate as those in question, I was among those who got Iraq wrong in 2003. I was the reverse John Kerry, in that I was opposed to the war before supporting it. The early arguments made by Wolfowitz and company, focusing on Saddam's evil character and his long past use of chemical weapons against his own people, struck me as a poor justification for war. Despite having opposed virtually every significant U.S. military intervention of the past quarter century, though, I was eventually persuaded that regime change in Iraq was necessary. In the wake of North Korea joining the nuclear club and the sudden dwindling of American options on the Peninsula, I believed a nuclear-empowered Saddam was an unacceptable risk.

While I've long since acknowledged that the war was a mistake and eschewed the nation-building campaign almost from its outset, it took me longer than most who write under the TNI masthead to advocate withdrawal, for a variety of reasons too complicated and tangential to this column to go into here.

Regardless, I supported President Obama's decision to follow through on the withdrawal timetable negotiated by his predecessor and assign almost none of the blame for what's going wrong in Iraq now to him. Furthermore, I almost always disagree with those in question on their instinct for muscular American military intervention in virtually every crisis anywhere on the globe. Regardless, I believe most of them to have something valuable to contribute to the debate.

Quite a few otherwise-sober analysts disagree.

James Fallows, the eminent journalist and author who served as President Jimmy Carter's chief speechwriter, threw down the gauntlet weeks ago via Twitter: "Working hypothesis: no one who stumped for original Iraq invasion gets to give ‘advice’ about disaster now. Or should get listened to."

Mother Jones Washington bureau chief David Corn chimed in, "Like his neocon comrades—Bill Kristol, Charles Krauthammer, Robert Kagan, and others—Wolfowitz does not deserve to be presented as an expert with important ideas about the ongoing mess. He and the rest of this gang should have had their pundit licenses revoked after the Iraq War."

Paul Waldman, an editor at The American Prospect and a Washington Post contributor, makes a more nuanced version of the argument, declaring, "there are few people who understand Iraq less than the Republican politicians and pundits who are being sought out for their comments on the current situation." He singles out for particular scorn John McCain, Lindsey Graham, and Kristol, cautioning, "Don’t forget what happened the last time the country listened to them."

That's fair enough, particularly since none of the three have any special insights to add to the conversation. Kristol, in particular, despite a PhD in government from Harvard, is simply a pundit with no substantive or regional expertise. But, frankly, that's true of most politicians and pundits being interviewed on television, not just the Republicans. And note that Waldman and company don't make the same argument about Joe Biden, John Kerry, Hillary Clinton, and scores of Democratic pols and pundits who also got Iraq wrong.

Huffington Post senior media reporter and NYU adjunct professor Michael Calderone laments that "Bremer and others who were largely discredited when it comes to Iraq are back in the spotlight, and they're being treated as credible experts on the growing chaos in the country." Among said "others" are Paul Wolfowitz, former British Prime Minister Tony Blair, Douglas Feith, Andrew Carr, and even former New York Times reporter Judith Miller.

Nor is the argument being advanced solely by Democratic partisans.

Stephen Saideman, the Paterson Chair in International Affairs at Carleton University and expert in the causes and consequences of intervention into intrastate conflicts, contends that "those who partake of major screw-ups can be seen but should not be heard. They can grimace, gnash teeth, jump up and down, gesticulate, but not speak up as they have very little credibility." He specifically cites Elliot Abrams, Cheney, Rumsfeld, Wolfowitz, Feith, Bremer, and Oliver North for exclusion, adding, "I am not saying that they should not be allowed to speak, but I don't see why anyone has to give them a microphone and a camera. Let them rail in private clubs, on street corners, and elsewhere. But why give them attention they no longer deserve?"

More pithily, as is her wont, Christine Fair, a counterterrorism and South Asia scholar at Georgetown, exclaimed, "Today on Faux News, Wolfo-twits was yammering on about Iraq. Really? The NERVE! Put a sock in it you warmongering sack of cat crap!"

Ad hominem is a logical fallacy for a reason. An argument's strength doesn't depend on who's making it. Excluding people from the discourse who have gotten it wrong in the past diminishes, rather than increases, our collective understanding. Even if we presume there's actually an objective process for identifying right and wrong in complex policy decisions where counterfactuals aren't available to us, the fact is that anyone who has made a significant number of hard choices will invariably have gotten some wrong.

It's perfectly legitimate for journalists interviewing former senior officials in the Bush administration—as with any other guests—to press them on their past decisions and statements. To the extent Wolfowitz or anyone else has shown poor judgment on a specific issue, they should absolutely be called upon to explain why we should trust their judgment now. And, if they're making arguments now that a Democrat is president that contradict arguments they made when their guy was in office, they should be challenged to explain why circumstances are different now or whether there are legitimate reasons as to why their position evolved.

Beyond that, as "Meet The Press" host David Gregory explained in justifying having Wolfowitz on his program to talk about the latest mess in Iraq, it’s worthwhile to speak with Iraq war architects when seeking to answer the question, “How did we get here?” In particular, it's valuable to "examine why the Bush administration’s goal of training an Iraqi army and helping to create a self-sustaining, democratic government after U.S. withdrawal didn’t come to fruition."

Now, again, it might be better to ask legitimate experts on the region and foreign internal defense rather than pols and pundits. But that's not how these shows work, and it never has been. Whether rightly or otherwise, those who book talking heads shows or fill op-ed holes have almost always gravitated towards famous politicians and media celebrities. Being engaging on television—and being willing to show up to engage in lively opinion-mongering, preferably with an identifiably partisan slant—is much more prized than deep knowledge.

While beginning with the ad hominem, Corn followed it with a more nuanced argument: that Wolfowitz was spectacularly wrong about the nature of Sunni-Shia tensions a decade ago and seems not to have learned anything about that subject in the interim.

That's a fair point that's actually useful in furthering our understanding. Wolfowitz is legitimately an expert on many things. He's a Chicago PhD who wrote a dissertation on nuclear proliferation in the Middle East and taught political science at Yale. He's held prominent positions, including director of policy planning and assistant secretary for East Asian and Pacific Affairs at State, ambassador to Indonesia, undersecretary for policy and deputy secretary at Defense, and president of the World Bank. That's more than half a century of education and wisdom that the vast number of us watching television news or reading op-eds don't have and can therefore benefit from. He knows an incredible amount about how policy is made and has broad regional expertise in the Middle East and the Asia-Pacific. But that doesn't mean he knows everything or, indeed, that he knows what he doesn't know.

Similarly, Cheney has served as a Congressman, White House chief of staff, defense secretary, and vice president. Prior to the Iraq fiasco, he had a sterling reputation from his management of the first Gulf War and other successes. Few have more insights into how our government works and how difficult policy decisions are made.

Think Progress national-security editor Hayes Brown takes a more thoughtful approach, arguing that key people who got it right then at substantial political cost—Brent Scowcroft, Anthony Zinni, Howard Dean, Richard Clarke, and others—should be more prominently featured now. That's a fair point. Interestingly, he also includes Colin Powell, who many liberals despise for his role in selling the Iraq WMD story to the UN but is considered a turncoat by many Republicans for not backing the war with sufficient zeal, on the list. Brown believes, correctly, that Powell distinguished himself from others on the Bush Iraq team by taking responsibility for his mistakes once they became apparent and changing his mind when new evidence came to light.