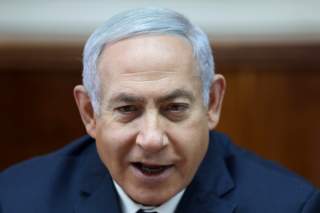 Not since Abraham Lincoln defeated George McClellan has a democratically elected leader been faced with an election campaign against one of his own recent chiefs of staff—and won. Israel’s Benjamin Netanyahu defeated not only a party led by former Israel Defense Forces (IDF) Chief of Staff Benny Gantz, but also the two other former IDF chiefs of staff Gantz was running with. In April 9 elections Netanyahu vanquished them all, expanding the size of his Likud party in Israel’s Knesset from thirty to thirty-six seats, virtually ensuring that he will form Israel’s next government. He has now been in power ten years and this will be the fifth government he has led.

Netanyahu’s ability to achieve such longevity in Israel’s politics is due to his reading of the shifts taking place in Israeli society and also the constant pattern of opponents underestimating his qualities. By holding on to power, Netanyahu will also cement his legacy of incrementalism when it comes to Israeli foreign policy and the conflict with the Palestinians. Instinctually pragmatic, conservative and cynical, Netanyahu has consistently asserted that any peace in the Middle East must be based on security for Israel.

He told a Joint Session of Congress in 1996 that Israel was ready to “broaden the circle of peace to the whole Arab world and the rest of the countries of the Middle East.” But he warned that “our negotiating partners, and indeed all the regimes of the region, must make a strategic choice, either follow the option of terror as an instrument of policy, of diplomacy, or follow the option of peace.” He also said that countries and polities in the region, including the Palestinian Authority (PA), Hezbollah and Syria, had to “prevent terrorist attacks against Israel.”

Netanyahu’s views have only become more cynical over the last two decades since his first stint at prime minister ended in July 1999. He once spoke about the possibility of democracy spreading throughout the Middle East and forecast normalization with regional states. Today his goals appear less lofty. He visited Oman last year and has spoken about “peace through strength,” and Israel’s connections with six Arab states in the region. Connections and contact is not normalization and open relations. At recent meetings of Arab states in Jordan and in confabs such as the Manama Dialogue forum, Jordan has stressed that a two-state solution is of paramount importance. Yet Netanyahu prefers quieter relations not predicated on a final status agreement with the Palestinians. He sees Israel as sharing mutual interests with the Gulf and southern Arab states, such as Egypt and Jordan, in confronting terrorism and Iran’s influence in the region.

These are the known quantities of Netanyahu’s worldview that underpinned the elections this year. What he offers Israel is more of the status quo. Netanyahu argues that under his leadership Israel’s GDP growth has increased consistently, rising to higher GDP per capita than Japan and a higher GDP growth than the average among the OECD. Netanyahu’s ten years in office have also seen the successful deployment and progress in improving Israel’s layered missile shield of Iron Dome, David’s Sling and the Arrow program, all developed with U.S. support. It is almost five years since Israel’s last conflict in Gaza and Israel has successfully carried out more than a thousand strikes against Iranian and pro-Iranian targets during the court of the Syrian Civil War, according to former Chief of Staff Gadi Eisenkot. Netanyahu can take credit for managing Israel’s role in the Syrian conflict, both striking at Iranian weapons transfers to Hezbollah, while not entering the conflict itself. Several incidents threatened this calm, such as the downing of a Russian aircraft in September 2018 by Syrian air defense during an Israeli strike, but for the most part Israel weathered the storm.

However, while Netanyahu can bask in an era of economic growth and successes in keeping the country secure, he has also eroded his own administration by holding five different ministerial portfolios, including being his own defense and foreign minister, health minister and immigration minister. This is unprecedented. It came about because Netanyahu tends to have a high regard for his own abilities and belief that he is doing what is right for the country, which results in constant spats with Israeli media, divisions with Diaspora Jews, and even attacks on the Israeli judiciary. Some have drawn parallels with Donald Trump’s rhetoric, but Netanyahu’s agenda is more complex and is based on decades of feeling that he was treated shabbily in the 1990s in the wake of Yitzhak Rabin’s 1995 assassination, seen as the hardliner taking away the hopes and dreams of the Oslo peace period.

All these issues piled up on Netanyahu last year, including looming indictments in several high profile corruption cases. Defense Minister Avigdor Liberman resigned in November 2018 after months of rocket fire from Gaza. Last year saw weekly protests in Hamas-ruled Gaza in which more than 250 Palestinians were shot and thousands injured in clashes with Israel along the Gaza border. Hundreds of rockets were also fired at Israel, including a long-range rocket that struck Beersheba. Despite the volume of rocket fire and death toll from the protests, each of which represented an escalation as large as the months of the First Intifada and the 2009 Gaza war, Netanyahu preferred to focus on the Iranian threat in Syria, and refrain from a ground assault on Gaza. Nevertheless, he would have sensed that he was going to be hammered on security in the elections which he called in early December.

On Netanyahu’s side was an Israeli public that is more skeptical of peace than in the 1990s and which has been voting more populist, right wing and religious in the last decades. But the right wing in Israel is split between a plethora of parties. Yisrael Beiteinu, which often gets Russian-speaking votes, the Union of Right Parties, which appeals to many religious Jewish voters who live in the West Bank, the New Right Party and a more centrist party called Kulanu all proudly label themselves “right.” While all these parties are natural partners of Netanyahu’s Likud, there are also two ultra-Orthodox parties that prefer Netanyahu over the center-left.

However, Netanyahu faced his strongest challenge when former Chief of Staff Gantz linked up with former Chief of Staff Gabi Ashkenazi, and former Defense Minister Moshe Ya’alon. Yair Lapid, leading the Yesh Atid party that had eleven seats in the Knesset, also joined the three defense heavies to form the Blue and White Party in February 2019. This was an unprecedented hurdle for Netanyahu. Three of the last five Israeli Chiefs of Staff were confronting Netanyahu who has prided himself on being “Mr. Security.” How could he argue against them on security, when Gantz and Ashkenazy had commanded the last three Gaza wars. Ya’alon, Chief of Staff from 2002 to 2005, had also been central to defeating the Second Intifada. These were the architects of Israel’s current security. Together with Lapid, a centrist populist, their party was polling at thirty-six seats in February and March, and appeared able to defeat Likud. The IDF is Israel’s most trusted national institution in a country with national conscription. About 88 percent of Israeli Jews say they trust it in surveys. Netanyahu had been beaten in 1999 by former Defense Minister and Chief of Staff Ehud Barak. It looked like these former generals could do it again.

Gantz said he came to unify the country, to bring “new leadership which will create a united, unified, cohesive society.” He sought to portray Netanyahu, who is sometimes nicknamed “King Bibi,” as obsessed with himself. “No Israeli leader is king, the state is not me, the state is you,” Gantz said in January. He also impressed the pro-Israel group AIPAC in a March speech in Washington.

In the end, Netanyahu was able to do what he has done in the past and surprise the electorate by performing better than the polls. In 2015 Likud had received thirty seats, now it has thirty-six. On election night Likud grabbed 1.13 million to Blue and White’s 1.12 million votes. Gantz conceded defeat on April 12. Yet Blue and White had performed well, receiving more seats of any opposition party since 1988 when Shimon Peres received thirty-nine and Likud received forty seats. The problem for Israel’s center-left today is that it has few partners for a coalition even if it ever does perform better than the right. The Labor Party, which once ran Israel for decades, now has only six seats in the Knesset or 4.4 percent of the vote. Meretz, a left-wing party which had between nine and twelve seats in the 1990s, now has four. Israel has an Arab party in the Knesset and an Arab-Jewish party which are both unions of several small parties, but they do not form an effective opposition.

The small parties will now seek to maneuver ahead of a Netanyahu-led coalition government. Even though they are small, they are needed to form the government. Netanyahu still has potential indictments hanging over him. That means some choppy waters ahead.