Netanyahu's Inner Circle Is Clashing over the Future of U.S. Policy 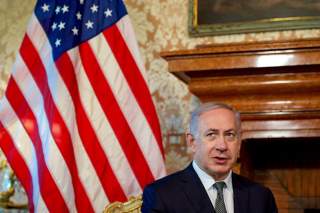 President Donald Trump’s request of Israeli prime minister Benjamin Netanyahu in their joint press conference last month that he “hold back on settlements for a bit” has undergone Talmudic levels of parsing by everyone from seasoned diplomats to late-night hosts in Israel and the United States. The debate on what exactly “holding back” and “a bit” mean is creating tensions in Netanyahu’s right-wing coalition, where many are calling for annexation.

A poll last week indicated that 55 percent of Israelis think Trump will allow settlement construction, while the opposition, which ranges from centrist to far-left, is focused more on “hold back” than “a bit.” Meanwhile, the debate in the coalition came to a head when Israeli defense minister Avigdor Lieberman said he “received a direct message—not an indirect message and not a hint—from the United States” that annexation talk could launch a crisis. Israel’s Justice Minister Ayelet Shaked, however, said that never happened, and anyway, the United States can’t tell Israel, a sovereign country, what to do.

When Trump was elected, Netanyahu was clearly pleased by the outcome after eight years of dealing with a U.S. president with whom he had butted heads many times. “You are a great friend of Israel . . . I look forward to working with you,” he said in a message to Trump posted online on November 9—but many to his right were euphoric, as though they received carte blanche from America to pursue their policy goals.

“The era of the Palestinian state is over,” declared Naftali Bennett, Israel’s education minister and head of Bayit Yehudi (Jewish Home), the most right-wing party currently in the Knesset, and a part of Netanyahu’s coalition. The Knesset Land of Israel Caucus, a pro-settlement group of lawmakers including members of Netanyahu’s Likud Party and others, said Trump’s election is an “historic opportunity,” calling for the government to accordingly “resume building . . . in every part of our land.”

Ahead of the Netanyahu-Trump meeting, Bennett had two things he wanted from Netanyahu: to renounce the two-state solution, and to annex Area C, the parts of the West Bank in which Israelis live.

Much has already been made of Trump and Netanyahu’s focus on regional, as opposed to bilateral, negotiations, and Trump saying, “I’m looking at two-state and one-state, and . . . I can live with either one.” Netanyahu and his right flank saw that part of the meeting as a success.

When it comes to settlements, one could easily say POTUS’s comment is a win for Netanyahu, because it gives him an answer for those on his right when they demand action, since he mostly tries to maintain the status quo on Palestinian-related issues. However, the over four hundred thousand people whom Trump’s statement most directly impacts were relatively unfazed by it, if one is to judge by the responses of their political representatives. Those people are, of course, the settlers, meaning Israeli residents of Judea and Samaria (the historic name for what is better known as the West Bank), who have no plans to “hold off on settlements,” or at least not to hold off on continuing putting pressure on Netanyahu to pursue a more assertive policy.

Now, Bennett and others to Netanyahu’s right are working hard to achieve their second goal, starting with Ma’ale Adumim, a city four miles outside of Jerusalem that’s over forty years old with a population of around forty thousand. The Land of Israel Caucus proposed a bill to annex Ma’ale Adumim in May of last year, concurrently commissioning a poll that found that 78 percent of Jewish Israelis (who make up three-fourths of Israeli citizens) support applying Israeli law to the city, and only one-third think Israel should wait to do so until an agreement is reached with the Palestinians.

The Ma’ale Adumim bill reared its head again after the U.S. election, with its authors Yoav Kisch of Likud and Bezalel Smotrich of Bayit Yehudi putting it on the Knesset’s docket and removing it again and again at Netanyahu’s request. First, the prime minister asked that they wait until after Trump’s inauguration. Then he asked that they wait until after he meets with Trump. In early March, Netanyahu requested another delay, and the MKs obliged, planning to resubmit it for ministerial review the week of March 12.

Don’t be surprised if Netanyahu comes up with a new benchmark to allow him to continue the delay tactics, since Jason Greenblatt, Trump’s special representative for international negotiations, is expected to come to Israel later this month to discuss settlement issues.

Greenblatt’s visit is part of Netanyahu and Trump’s decision to form a joint mechanism to coordinate on settlement issues; so far, the Israeli side of the team consists of Ron Dermer, ambassador to the United States, whose term Netanyahu asked his cabinet to extend for a fifth year last week. The settlement committee is meant to smooth out possible friction between the Trump administration and the Israeli government on an issue that was a sticking point between Netanyahu and former U.S. president Barack Obama.

But the committee may not be able to smooth out friction within Netanyahu’s coalition. After eight years of a relative slowdown in construction within existing settlements, with the blame pinned firmly on the need not to run afoul of the Obama administration, and no new settlements built since 2004, much of Likud and all of Bayit Yehudi have made it amply clear they won’t take no for an answer.

Or, as a close associate of Bennett explained this week, no U.S. president will ever see eye-to-eye with him on the settlements, so why would he change his position? Bennett is “ignoring the distractions and applying his plan,” the source said.

Plus, the entire settlement of Amona was demolished earlier this year after the Supreme Court determined it was built on private Palestinian land, and no work has started on the replacement settlement the government promised to build for its residents on state land. Though Netanyahu reaffirmed his promise in recent weeks, his office also said he is waiting for the coordination mechanism to start its work. Sources in Bennett’s office argued that the new Amona shouldn’t need to be coordinated, because it’s not a new settlement; it’s reconstructed one that already existed. Meanwhile, Amona residents launched a hunger strike to urge the government to hurry up and build their new towns.

Which brings us to last week.

Netanyahu’s pushback against the pressure to build and annex has been relatively quiet, so as not to alienate his base. Behind closed doors, he’s been telling his party’s lawmakers and members of his cabinet that Trump is friendly to Israel, but we shouldn’t be too hasty and risk spoiling a good thing.

However, Lieberman, who has to sign off on settlement-related decisions, decided that he’d had enough and decided to be very blunt about it, as is his wont.

Agriculture Minister Uri Ariel, of Bennett and Shaked’s party, circulated a draft of a government resolution to start planning and building Amona II, and Bennett asked Netanyahu why things aren’t moving at the cabinet meeting on Sunday, March 5, mentioning the hunger strike.

Lieberman chimed in: “Where are they hunger-striking? I need to lose weight. I’ll join them.”

According to the Army Radio report on the Defense Minister’s quip, Netanyahu told Lieberman that it is not a laughing matter.

The next day, Lieberman went from tasteless humor to a more serious warning, speaking to the Knesset Foreign Affairs and Defense Committee.

Referring to a Likud backbencher gone rogue, who called in a TV interview to annex the entire West Bank but not give Palestinians the right to vote, and was met by condemnations from across most of the political spectrum, Lieberman said he was getting phone calls from around the world asking him to clarify the matter.

“We need to separate from the Palestinians and not to integrate them,” Lieberman said. “Applying Israeli sovereignty to Judea and Samaria means 2,700,000 Palestinians, and I’m not even talking about international law, the political ramifications and the international community’s reaction to the idea that we wouldn’t give them the right to vote. . . . This attitude is simply wrong, in my opinion, and the coalition has to make it very clear that we don’t plan to apply Israeli sovereignty at the moment.”

The Americans would not stand for it, he added, saying the clear message from the Trump administration that “annexation of all of Judea and Samaria means an immediate crisis with the new government, so whoever wants a crisis with the new American government . . . should do it. I call for MKs to be responsible.”

Shaked, speaking to Army Radio Monday evening, shrugged Lieberman off: “I’m not familiar with messages like these.

“We aren’t a banana republic. . . . We are an independent and sovereign country,” she stated. “The U.S. government favors Israel and respects the prime minister, and with work, that government will back Israel and the government’s policy. We have a right-wing government, and we have to build in Judea and Samaria and Area C. . . . Certainly all [ministers] support annexing Ma’ale Adumim and Gush Etzion [a settlement bloc on the other side of Jerusalem]. There was a freeze for eight years, and this is the time to break it.”