The New Age of Nuclear Diplomacy 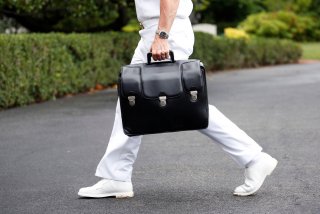 President Joe Biden and President Vladimir Putin have met in Geneva and now over the next weeks and months, we will find out what progress the two made in improving the relationship between the two nations. Going into the meeting, the conventional wisdom was that the one area of potential progress was on nuclear “arms control,” with attention centered on reducing overall warhead numbers and adopting policies such as “no first use” of nuclear weapons.

However, a person must be wary of such future deals as Russia has indicated it wants to stop U.S. missile defenses and the development of U.S. long-range prompt conventional strike systems, without necessarily curtailing any of their military capability. Remember when previously offered by the United States a reduction by one-third in the New START level in 2013, Putin rejected the idea that same day.

In short, while arms control can be useful, it can also be fraught with danger given what Russia seeks to curtail, especially America’s strong conventional deterrent.

For example, although hypersonic speed missiles are already in the nuclear arsenals of the two countries, capturing conventional forces of hypersonic capability under a follow-on to New START is Putin’s objective—a deal he would try and not observe while insisting that the United States stick religiously to any such limits.

Additionally, Putin also wants to have limits on space deployments which would largely prohibit the United States from being able to defend its space assets by being able to take out Russian or Chinese assets as a deterrent capability. On top of which Putin wants to significantly restrict the number and geographic area of U.S. and allied missile defenses.

Many U.S.-based arms control and disarmament organizations are also pushing such policies, not unlike when disarmament groups endorsed the Soviet nuclear freeze proposals in 1979. But these ideas are not in the U.S. interest and should be rejected. The idea, for example, that missile defenses are destabilizing is absurd. Having forty-four interceptors in Alaska and California—the current national missile defense system—and with plans to grow that force to sixty-six and hopefully to over one hundred simply helps significantly degrade the Russia and Chinese threats of using limited nuclear strike threats by Russia and China as coercive tools of diplomacy.

One idea proposed by a group of U.S. and European leaders is to unilaterally reduce by a symbolic 150 deployed warheads or 10 percent of the legal limit of 1550 warheads now deployed. But that would require taking out the equivalent of either two submarines from the current force of twelve, or an  entire wing of Minuteman missiles.

Why would a person cut by 16-20 percent the number of platforms or strategic nuclear deterrent vehicles? Such a cut simply makes targeting easier for an adversary. Better would be to gradually change the mix of mirved vs single re-entry vehicle missiles to favor the latter, not unlike the bomber counting rules.

For example, with the bomber counting rules under New START, the United States can deploy sixty nuclear-armed bombers, but with as many weapons as they can carry, but only sixty counts toward the New START limit of 1550. This flexibility allows a robust bomber force to continue in its conventional role. And therefore, the United States does not have to reduce those bombers. It can commit to that deterrent mission. Russia has never liked that rule but it promotes stability.

Another idea is to have better transparency and adopt some of the START I verification measures.

Supporters of the New START Treaty insist that verification measures now in place are perfectly adequate. At issue is a little understood but critical aspect of verification.

Our D-5 submarine-launched ballistic missiles can each carry eight warheads and have at one-time decades ago been tested with ten warheads. New START supporters claim that if the United States had to count every D-5 missile as if it had eight to ten warheads—its capability—it could not deploy the number of submarines it needed or the land-based ICBMs now numbering four hundred warheads. Similarly, the Minuteman III intercontinental ballistic missiles can carry three warheads but are downloaded to one warhead, and that is what is counted.

This leads to the current problem with New START. The United States can inspect ten missiles a year on the Russian force. And the Russians have to tell the United States how many warheads each inspected missile carries. And when we check the missile, we can verify that indeed that particular missile is loaded only with that number of warheads. But we do not know about the rest of the more than five hundred missiles and bombers in the Russian force.

Under START I, which reduced deployed Soviet and U.S. nuclear warheads from twelve thousand to six thousand, the D-5 missile was not counted at 8 warheads under START.I. The Soviets were aware of this and it was part of the agreement during negotiations that led to a reciprocal agreement where the Russian SS-N-23 for example was tested with ten warheads but was accountable at four warheads.

START I allowed limited downloading (1,250 warheads) and START II allowed downloading to four warheads on Trident. The Moscow Treaty and New START allowed unlimited downloading, In this way, arms agreements could reduce the total number of deployed warheads counted but without impinging on the stability of the deployed forces and their deterrent capability.

As we noted, if the U.S. Navy’s D-5 missile counted as carrying eight warheads per missile, the 192 missiles scheduled to be deployed with the twelve new Columbia class submarines would count as 1536 warheads, more than the total missile warheads allowed by the New START agreement.

While the New START warheads inspections are exactly the same as under START I, such inspections can’t prove anything re the entire force. There are no rules that attribute the same number of warheads for each type of missile. So, as noted earlier, each inspection may be able to tell you about the warheads on an individual missile but nothing about the other hundreds of the same missiles deployed elsewhere.

Verification would be markedly improved if the United States went back to the old counting rules where every missile of a particular class was counted the same in terms of warhead loadings. Would this be easy to adopt? As arms control expert Mark Schneider explains, every time you negotiate verification with Russia it is an epic battle. He explains “Russia will fight it tooth and nail and it will take years to negotiate at best.”

Now it is true that Russia wants what many arms controllers say they also support but Russia will probably not give up anything much in return. “Even if you had another Reagan administration it would take 10-15 years to negotiate a decent agreement with Putin and that is very optimistic,” said Mark Schneider, a top nuclear specialist at the National Institute of Public Policy.

What arms control ideas might be useful to explore? There are a number of other ideas not suggested by any of the disarmament advocates that could be quite useful in improving strategic stability.

We could look at re-establishing portal monitoring of missile production facilities which tells a person something about the potential for breakout or hedge uploading or the dimensions of the force being deployed. Also sharing actual missile test data would also be beneficial.

Another idea is to have better transparency of all nuclear powers, especially those on the UNSC—that would of course mean China—as laid out by a new letter to the President from Representatives Rogers, Nunes, and McCaul calling for a full, unclassified report on Chinese nuclear forces, policy, and arms control prospects.

Pakistan and India could also adopt Track-II-type discussions—with U.S. assistance—to better understand how they would deploy nukes in a crisis and to lessen inadvertently signaling the wrong message. It is on the subcontinent where a nuclear conflict might very well occur.

To reiterate as many have proposed the understanding that “a nuclear war must never be fought” sounds helpful but such a policy statement—now repeated by the U.S. and Russian leaders—is largely meaningless but also could be counterproductive.

Of course, no one on the U.S. side wants to see any use of nuclear weapons. But that is not exactly the case for Russia. Dozens of times over the past decade, Russian military and political leaders have specifically threatened to use nuclear weapons against the United States and its allies in the service of aggression. Even though the two leaders repeated the historical Ronald Reagan and Mikhail Gorbachev statement, it does not mean the same thing in Russia as in the United States. It could of course also be construed to be leading to the adoption by the United States of another related policy proposal and that would be “no first use,” no matter the conventional imbalance that could very well be on the table that would make the use of nuclear force necessary.