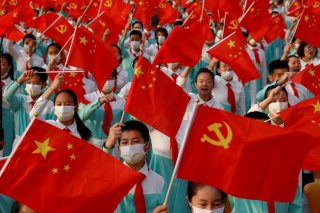 Normally an academic book focused on interpreting the speeches of Chinese Communist Party leaders (and other CCP documents) would only generate interest among a narrow American audience. But Rush Doshi’s The Long Game: China’s Grand Strategy to Displace American Order commands attention because Doshi—a Harvard Ph.D. and founding director of the Brookings Institution’s China Strategy Initiative—recently joined the Biden administration as a director for China on the National Security Council staff, where he works for Indo-Pacific policy coordinator Kurt Campbell (the mentor to whom Doshi’s book is partially dedicated). Although the book’s jacket states that it “does not necessarily reflect the views of the US Government or NSC,” it would be fair to assume that its contents will inform the Biden administration’s assessment of and response to the strategic challenge that China poses to the United States.

Doshi expertly characterizes the nature and scope of that challenge by tracing its evolution and expansion over the past thirty years. His central thesis is that Beijing has a “grand strategy” (refuting those who think it doesn’t) to “displace American order” both within East Asia and globally by weakening the support base of the U.S.-led international order and “strengthening those forms of control supporting a Chinese alternative.” This Chinese strategy has shifted over time, based on Beijing’s changing calculus of the balance of power between the United States and China.

From the fall of the Berlin Wall in 1989 until the Global Financial Crisis of 2008, China’s strategy focused on “blunting” American power—and its capacity to threaten Chinese interests—because Beijing deemed itself too weak to do more than that. This assessment was the product of what Doshi calls “the trifecta” of the Tiananmen Square crisis of 1989, the first U.S. Persian Gulf War in 1991, and the collapse of the Soviet Union later in 1991—all of which left China shaken and acutely aware of its vulnerabilities and relative weakness. This was the origin of Deng Xiaoping’s famous guidance that Beijing should “hide its capabilities and bide its time.” Doshi outlines in detail the military, political, and economic strategies and tactics that Beijing launched during this period in an effort to minimize U.S. leverage over China.

This changed after the Global Financial Crisis prompted Chinese leaders to reassess their position and conclude that the balance of power was trending in their favor. In Beijing’s view, the financial crisis exposed the weaknesses of the U.S. system and hastened the relative strategic decline of the United States. Based on this, Chinese leaders shifted toward a more proactive strategy of “building” China’s own power and leverage to push back against the United States. Doshi highlights that this strategic shift focused on China’s periphery because Beijing judged that both the need and the opportunity were greatest within East Asia, given perceived challenges to China’s territorial sovereignty and its primary goal of maximizing its regional security and influence.

This shift was profoundly significant because it represented a retreat from Deng’s “hide and bide” guidance toward a greater emphasis on “actively accomplishing something”—a goal that Deng had put on the back burner. In this regard, one of the most important elements of Doshi’s book is his attribution of this shift not to Xi Jinping but to his predecessor Hu Jintao, who essentially announced it in 2009, three years before Xi took the helm. Doshi says explicitly that “the idea that China’s recent assertiveness is a product of President Xi Jinping’s personality” is “a mistaken notion that ignores the longstanding Party consensus in which China’s behavior is actually rooted.” (He also notes that the goal of the “great rejuvenation of the Chinese nation”—which is also routinely attributed to Xi—actually dates back to the Deng period and even earlier.) Here again, Doshi offers a detailed outline of the components of this more proactive strategy, which included Beijing’s broader involvement with multilateralism; expanded economic diplomacy—especially the Belt and Road Initiative; more active defense of China’s territorial claims; and a greater emphasis on military power projection capabilities.

Doshi may be marginally exaggerating the significance of 2008 as an inflection point, or the Global Financial Crisis as the exclusive catalyst for the shift in Chinese strategy. Many of China’s “building” strategies arguably started to overlap with its “blunting” strategies earlier than that. And other regional developments during the 2008-2012 period—such as actions by other territorial claimants in the South and East China Seas, and the Obama administration’s “rebalance” to East Asia—fueled Beijing’s assessment of the need (not just the opportunity) to be more assertive in the region. In this respect, 2008 was as much an accelerant of ongoing trends as it was a turning point.

The same applies to Doshi’s characterization of the third (and current) stage of Beijing’s strategy, the beginning of which he dates to 2016. In this phase, China has taken its regional “blunting” and “building” strategies to the global level, because it calculates that shifts in the balance of power have created new opportunities to do so. According to Doshi, this was Beijing’s response to “Brexit” and the election of President Donald Trump, which Chinese leaders interpreted as reinforcing both the West’s relative decline and its retreat from globalism. This fueled a new Chinese mantra of “changes unseen in a century,” which Doshi argues has supplanted both “hide and bide” and “actively accomplishing something” as the guiding principle for China’s global ambitions. “Changes unseen in a century,” however, is not a prescriptive concept; and it refers to challenges as well as opportunities for Beijing. Moreover, many of China’s “blunting” and “building” strategies had already gone global before 2016. But Doshi is correct that Beijing has accelerated and expanded them since then, and is especially more active in globally promoting “the legitimacy of its own system” relative to the United States.

In this regard, one weak link in Doshi’s meticulously researched and well-argued book is his characterization of China’s goal of “displacing the US as the world’s leading state.” “Displace” does not necessarily mean “replace” or supplant.” And unlike Doshi’s exhaustive documentary citations for Beijing’s other strategies and goals, he offers few authoritative and/or persuasive sources to support the idea that China seeks to replace the United States as the global hegemon. He quotes Xi (and official commentary on Xi’s speeches) as suggesting that China will become “a [emphasis added] global leader in terms of composite national strength and international influence”; would “guide the international community to shape a more just and reasonable new international order”; would “lead reform in global governance”; and “is qualified to be a leader.” But being “a” leader does not necessarily mean being “the” leader. This may sound like a trivial or semantic distinction, but it is the difference between China seeking to displace the U.S. order in favor of a Sino-centric order, or in favor of a new multipolar order. And there is both evidence and logic to suggest that Beijing’s objective is the latter: a multipolar order, albeit one in which China is second to none.

Doshi rightly observes that China “is unlikely to willingly defer to an American order in perpetuity.” But that does not mean Beijing believes it can achieve American deference to a Chinese order. He asserts that the “US-China competition is primarily . . . over who will lead regional and global order and what kind of global order they might create from that position of leadership. In many places, but not all, it is a zero-sum game because it is over a positional good—that is, one’s role within the hierarchy.” But need it be zero-sum or “winner take all?” Doshi quotes China’s top diplomat, Yang Jiechi, as claiming otherwise: that Beijing’s approach would “surpass the traditional Western theory of international relations based on zero-sum games.” He also quotes Singaporean leader Lee Kuan Yew as saying “the Chinese will want to share this century as co-equals with the United States” rather than be “an honorary member of the West.”

What Doshi appears to be overlooking or dismissing here is the possibility that China seeks to escape subordination to the United States, but without presuming that it can, in turn, subordinate the United States: that it expects a central role in global leadership without presuming exclusive global hegemony. This would be consistent with Beijing’s perennial and persistent focus on “multipolarity” and on legitimizing its governance and development model rather than requiring other countries to adopt it. This would also reflect Beijing’s recognition that other countries (outside the United States) also have agency and preferences that China cannot easily ignore or take for granted; and its general disinterest in how other countries govern themselves as long as they engage with China on terms acceptable and beneficial to Beijing. Finally, it would be consistent with a logical calculation that exclusive global hegemony would not be sustainable—even if it was achievable—and thus is not necessarily desirable.

By no means is this meant to suggest that China will deal or compete with the United States benignly or passively. On the contrary, Doshi is correct that Beijing seeks to “displace liberal values as the global default and to elevate, legitimize, and globalize Chinese principles and programs.” China will also seek to