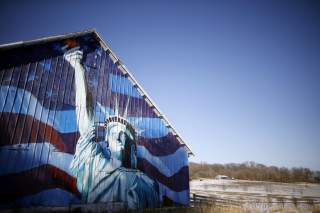 How can an American consumer who is interested in supporting and shoring up U.S. manufacturing figure out what to buy? The good old days of looking for the “Made in America” tag never really worked very well except for when a person was shopping for clothes at a store, and those tags are pretty much over in this era of global supply chains. A recent Wall Street Journal article also documents the current deficiencies of this label as a guide to consumers, since it is often used fraudulently. Nor does it suffice to look for a name like General Electric or General Motors or Chevy, rather than Fiat or Mercedes or Honda, since the headquarters and home country of a given company may not tell a person much about where its factories are located and who works inside them.

Going forward, the U.S. government should fund and maintain an online database where consumers can seek information about domestic content on a plethora of different brands for many different types of goods. It might also include the foreign content of a product with specificity about the country of origin for those consumers who are not insistent on buying American goods all the time but who prefer to purchase goods produced largely in allied countries with shared labor and/or environmental standards.

Ideally, the database would be fairly comprehensive. But it could usefully begin with core areas of the economy that are most relevant to large numbers of manufacturing jobs, as well as to leading-edge sectors of the high-tech economy. The manufacturing sector is most relevant to the well-being of the beleaguered American middle and working classes; high-tech is most relevant to ensuring that the United States remains the world’s leading military power in the years and decades to come. Since the Federal Trade Commission currently oversees the “Made in America” imprimatur accorded to certain goods, it could make sense to organize the effort under its auspices.

The database would, to be sure, take some doing; collecting and validating the necessary data would be a significant task. Ultimately, many dozens of personnel could be required to staff whatever agency was established, or expanded, to handle the task, with a likely annual cost measured perhaps in the $10 million to $20 million range. That’s not a trivial size, but it is a tiny amount when compared to the more than $2 trillion that Americans spend each year on imported goods. With the raw data in hand, analysts could then use simple algorithms to estimate what fraction of a given final product’s value was derived from components made domestically. That information could show where research and development were done to create a particular product, and where the profits from sales accrued.

A database of this type already exists for automobiles; it was created at American University’s business school. Perhaps the new proposed government database could, after validating the AU methodology, simply adopt this approach for its vehicle section (with AU permission of course), and direct its own research to consumer goods such as phones and computers, televisions and other electronics, major household appliances, household building materials, furniture, medications, and eventually clothes and footwear. The methodologies would not be perfect, and the amount of detail required might necessitate some selectivity in which types of commodities to assess first, but these are acceptable limitations for the purposes we envision here.

Believers in pure free trade may be aghast at the idea of helping consumers figure out when to buy American based on pure patriotism or (shudder to say it) economic nationalism. However, Donald Trump is not the only American politician who has rightly figured out that the strength of the American manufacturing base is actually relevant, not only to middle-class jobs, but to long-term U.S. economic strength and national power. Allowing individual consumers to invoke patriotism to buy American is not only a longstanding government practice (since the government-sanctioned “Made in America” label has been around for decades). It is also nothing to be ashamed of—and nothing unique to the United States, either.

The database need not, and should not, discourage consumers from making whatever choices they wish. Most will probably continue to make their choices based on price, quality, availability, service and maintainability—even if 80 percent of them expressed a preference for Made in America goods in a recent survey. When it comes to spending their hard-earned dollars, Americans will generally be reluctant to buy an inferior product at a higher price, if that happens to be the case for an American-made good. So the existence of such a database would be unlikely to precipitate unhealthy economic nationalism and a trade war. It would simply provide consumers with additional and important information when forming an overall judgment on their consumer choices. It would be more likely to tilt the balance in what was already a very close call than to radically change consumer behavior. It would do so much more benignly, and much less disruptively, than some of the tariff proposals considered under the Trump administration to date.

In short, this idea is a useful safety valve—economic, as well as psychological—for a country that is finding itself anxious and frustrated with the state of global trade and its effects on U.S. jobs. To be sure, it will not change trade patterns dramatically, nor will it solve the problems of the American middle class. Automation and innovation, destroy (and create) far more jobs than does trade, by perhaps a five-to-one ratio, and as economists remind us. Thus, the nation’s fiscal deficit makes a trade deficit of some type virtually inevitable. But it could help Joe or Jane Six-Pack make a more informed and empowered decision when debating over which dishwasher or telephone or car to buy.