The New China Challenge: A Game-Changing Strategic Agreement with Iran 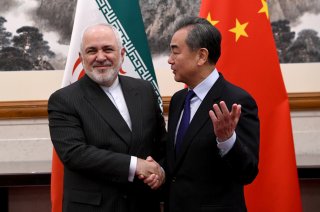 China and Iran have recently signed a strategic agreement that is supposed to last for a quarter-century. Some observers believe this could be a game-changer in the Middle East providing China a firm foothold in the region at the expense of the United States. It is also speculated that the agreement would increase Iran’s leverage in its negotiations with the Biden administration about reviving the Joint Comprehensive Point of Action (JCPOA). It is argued that in the long run, the agreement will also provide Iran with the opportunity to free itself from the economic and strategic viselike grip of the United States and its allies that has stifled its economy and restricted the spread of its political influence around the Middle East.

The agreement had been under discussion since 2016 but its signing was delayed because of Iran’s concerns that it might have an adverse effect on U.S.-Iran relations and negatively affect the implementation of the JCPOA provisions calling for the lifting of sanctions on Iran. Former President Donald Trump’s withdrawal from the nuclear deal and the re-imposition of even harsher American sanctions as well as the Biden administration’s foot-dragging about returning to the deal convinced Iran that it was now time to signal Washington that it has other strategic and economic options which can no longer be put on hold.

While the details of the China-Iran agreement have not been made public, it is commonly assumed that it is largely unchanged from an eighteen-page draft obtained last year by the New York Times. China would invest $400 billion over twenty-five years in dozens of fields, including banking, telecommunications, ports, railways, health care and information technology, and in return would be guaranteed a regular supply of Iranian oil on heavily discounted terms during that period, according to that draft.  Additionally, per the New York Times, the draft included provisions regarding expanding military cooperation and joint research and weapons development as well as intelligence sharing.

While a strong statement of intent and a good signaling tool it remains to be seen how much of its ambitious agenda will be implemented in the course of the next twenty-five years especially since policies in both Beijing and Tehran are not made in a vacuum and are subject to multiple pulls and pressures. It is clear that for China the agreement is tied to its Belt and Road Initiative and provides it the opportunity to bring Iran firmly into China’s BRI ambit. It is also an instrument for signaling Washington that Beijing is not afraid of intruding into areas that America considers its strategic preserves.

For Iran, it is a way to escape America’s attempt to hem it in economically and strategically. This is especially important for Iran at this juncture when both Tehran and Washington are engaged in an intricate dance about reviving the JCPOA and both are waiting to see who blinks first. Iran, supported by China and Russia both signatories of the JCPOA, argues that since the United States abrogated its commitment to the deal unilaterally it must first return to the agreement and lift all sanctions before Iran can be expected to return to the limits on its nuclear program imposed by the JCPOA. The United States insists that Iran must first implement the curbs imposed by the JCPOA before Washington can contemplate lifting sanctions. Domestic pressure from within the Congress and outside is adding to the Biden administration’s reluctance to make the first move. Tehran sees the China-Iran strategic agreement as a way to strengthen its bargaining position vis-à-vis the United States on this issue by demonstrating that Iran has other economic and strategic options and need not be dependent on American and European goodwill at the expense of its national and regime interests.

However, there are major limitations to the development of their relationship that neither China nor Iran can ignore. Despite tensions with the United States on strategic issues, especially relating to the Indo-Pacific region, China is caught in a web of economic interdependence with the United States and will be disinclined to support Iran beyond a certain point if it sees it as antithetical to its economic interests. Moreover, Beijing would be reluctant to get into a strategic faceoff with the United States in the Middle East that could escalate bilateral tensions around the globe especially in the South China Sea. Furthermore, China has major economic interests in the Gulf. Iran’s two principal adversaries in the region, Saudi Arabia and the United Arab Emirates are China’s leading Gulf oil suppliers and Beijing would not want to build a relationship with Iran at the cost of its relations with them. It is worth noting that China’s Foreign Minister visited both Riyadh and Abu Dhabi during the trip that led to the signing of the strategic agreement in Tehran.

In the final analysis, Iran is interested in reviving the JCPOA and getting Washington and its European allies to lift economic sanctions because it needs to build economic relations with them, principally in the realms of trade, FDI, and technology transfer, in order for its economy to recover and thrive. Chinese largesse, which will also come with long terms costs including lost oil revenue, cannot substitute for what good relations with the Western powers can offer to Iran in the long run.

Both China and Iran are interested in building their bilateral relationship in order to provide them greater leverage with the United States. However, such considerations have inherent limitations and cannot by themselves act as the basis for a durable strategic relationship. Nonetheless, it is possible that short-term considerations may produce long-term outcomes and the habit of cooperation can take on a life of its own. This is why it is important that Washington takes notice of the China-Iran strategic agreement, recognizes the fact that it had withdrawn from the nuclear agreement when Iran was in full compliance with it, and returns to the JCPOA without delay and without insisting on preconditions.