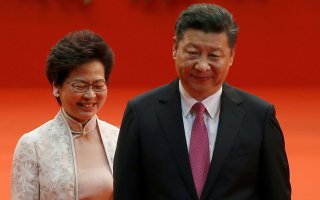 China is gradually enhancing its global strategic influence through ambitious projects such as the Belt and Road Initiative; alternate financial mechanisms such as the Asian Infrastructure Investment Bank and New Development Bank; and growing presence in international institutions like the United Nations through its increasing contributions to peacekeeping and leadership of important committees and bodies. China continuously reiterates that bilateral engagements with the United States must be categorized as “Major Powers” relations posturing that it must be now treated as an equal. There also appears to be a bipartisan consensus emerging in the United States on challenging China more proactively on a range of issues. U.S.-China relations are on a downswing as witnessed through the prolonged trade conflict and confrontations in the Indo-Pacific region. China has been put under increasing scrutiny by the international community in particular by the United States and Europe which, along with India and Mexico, has suffered the brunt of the coronavirus pandemic. As things stand, it will be pertinent to assess what are China’s strategic objectives? Which are the factors that influence it? What strategy is China adopting in its pursuit? and What are the inferences for the United States?

Three significant factors, from the over five thousand years of Chinese history, have had a significant impact on China’s strategic objectives.

First, the emergence of the Communist Party of China (CPC) through the Long March and the protracted struggle leading to the Civil War with Chiang Kai-shek’s Kuomintang has been an important lesson for China’s leadership on the hardships of acquiring power and influence. This has shaped Chinese leadership’s internal objective of securing the party and maintaining the stability of the fundamental system. Hence, China’s political system is centered on what could be described as “planned continuity” in decisionmaking with its leadership alternating between lifetime or fixed tenures since 1949. While Mao Tse-tung was the paramount leader for life, Deng Xiaoping, who did not wield the same power and influence, used his status to introduce, from 1992, fixed leadership tenures of ten years. This served the dual purpose of effecting a change in the face of leadership, thereby removing any rising discontent among the people during the ten-years rule while the CPC continued to maintain power in perpetuity. By removing the ten-year time limit in 2017, President Xi Jinping has reverted back to Mao and is, now, the Country’s president, CPC’s general secretary and the military’s chairman for a lifetime.

Second, China’s historical experiences with foreign interventions, which is referred to as the “Century of Humiliation,” and its sustained periods of violence including during the peasant rebellions, the late Ming uprisings, the warring states period, Taiping rebellion, Xinhai revolution has largely contributed towards the CPC’s emphasis on unification in an effort to remove security vulnerabilities and nullify forced external or internal interventions. Chinese writings also reiterate that—“Unification occupies an important position in the strategic thinking.” Hence, achieving unification encompasses bringing Taiwan under the Mainland; eliminating “splittist” elements in Tibet and Xinjiang; and integrating religious and ethnic minorities with the mainstream atheist Han populace. The emphasis on unification also helps in keeping the Chinese leadership alert on developments in Taiwan, Tibet, Hong Kong, Xinjiang or even within the People’s Liberation Army (PLA) and the Party.

Third, to ensure the stability of the fundamental system, China’s leadership continues to reiterate the country’s natural position, of historically being the Middle Kingdom, where it is the core asserting over the periphery of other states in an encircled international system. As the core, the leadership portrays, particularly to its people, that China is exceptional and has a unique civilization, philosophical and cultural heritage. China may be pursuing similar ideas like other countries, however, the leadership consistently lays stress on strategizing “in the Chinese way” for instance Socialism with Chinese characteristics. This has also gradually shaped China’s external objective of intending to be an important global voice in the twenty-first century. Through this objective of globally reemerging, it wants to create a sense of pride among its people for the country and Party and distract them away from any immediate discontentment.

China’s Strategy for Achieving Its Objectives

Long-Term Planning: The “planned continuity” in China’s leadership has a significant impact on decisionmaking, which, at most times, is formulated for the long term like the “two 100s” for 2021 and 2049. Hence, analyzing every Chinese action necessitates an understanding of the context, which would require going back into the past of that particular action along with assessing the evolving circumstances in which the action is initiated. This would provide critical insights into China’s intention and its future objective. For instance, China’s official broadcaster has detailed the domestic, regional and internal context of the decision to launch the 1962 attack against India.

Creating a Favorable Environment: At the core of China’s long-term strategy is its efforts to consistently promote the propensity of things, also known as Shi. The aim is to not fight an enemy but to create a disposition of forces so favorable that fighting becomes unnecessary. The conditions of victory are sown in advance such that armed engagements are minimized and a win is achieved without fighting. A famous general during the Shu Han State of the Three Kingdoms period, Gen Zhuge Liang observed that “It was necessary to steal into the mind, observe thought processes and then fashion the appropriate strategy to win a war against an enemy” has been widely emphasized in Chinese strategic thinking. China’s leadership believes that it is possible to achieve a decisive victory without or through minimal use of force. This strategy also finds resonance in a popular Chinese game called Wei Qi (like chess), which focuses on the importance of a protracted campaign, relative advantage and strategic encirclement.

Employing Minimal Force: China’s leadership has assessed the experiences of other countries driven by a desire to continuously learn, cut down weaknesses and sharpen strengths. It has realized that the use of force by past powers and empires to assert their hegemonic ambitions has led to their downfall in the long run. A CCTV documentary has observed, “Forcibly promoting ideologies and armed interventions will lead to perilous outcomes.” Chinese teachings like Sima Fa’s The Minister of War’s Methods; Sun Tzu’s Art of War; Zhanyi Xue’s The Science of Military Campaigns and Ralph D. Sawyer and Mei Mei-chün Sawyer’s translated The Seven Military Classics of Ancient China have propagated that war must be studied scientifically, avoided as much as possible and used only to impact the enemy psychologically. Xi’s constant message to the military is to achieve combat readiness and study wars with an aim to win future battles. China’s recent military reforms focus on building an agile, lean, informed and integrated force to win a short duration but high-intensity regionalized war. It appears to be continuously readying to use force, in all probability, for a short duration aimed at creating maximum impact on the enemy psychologically.

Adopting Covert Style: To promote Shi, China’s strategy is to gradually increase strategic influence globally through covert means. It leverages economic strengths and packages its culture as unique in its foreign policy objectives. This also helps the Chinese leadership to develop its domestic economy as is evident from its long-standing export and investment-oriented growth model. Its reiteration of cultural leverages is essentially centered on Confucius’s philosophy, which speaks about the importance of relationships and harmony. This complements China’s attempts at promoting its global rise as peaceful. Externally, there are around 500 Confucius (Hanban) institutes spread over 131 countries across five continents to propagate Chinese cultural influence. Internally, Confucian philosophy assists the leadership in indoctrinating its people away from violence, which, in turn, helps in maintaining control and stability of the fundamental system.

Utilizing Deception and Posturing: In the predominantly visual Chinese culture, deception and posturing are necessary tools to gain an advantage by keeping the adversary in the dark. Chinese literature like the PLA’s Analysis of Chinese Strategic Culture has also emphasized on the importance of trickery to keep others guessing of one’s intentions. The use of deception is central to Xiaoping’s twenty-four-character strategy known as Taoguang Yanghui (Hiding Brightness, Nourishing Obscurity) strategy. It is evident in Mao’s words “feign from the west and attack from the east” and Xiaoping’s words “How does it matter if the cat is white or black as long as it catches mice.” Consistent with this approach, China also portrays its strategic culture as unique and pacifist in comparison to western expansionist culture. The leadership has consistently emphasized the importance of portraying an image of a positive, steady, reliable and non-expansionist power. China uses deception and posturing very effectively in its diplomacy and defines it without attaching any negative connotations. It also uses posturing effectively, particularly in its economic approach by pursuing large infrastructure or development projects significantly visible to the eye, which reinforces, among the local populace, its positive role in supporting local development.

Use of Opportunism: China attempts to maximize opportunities provided by adversaries to rationalize its actions. The recent incursions along the Line of Actual Control with India was initiated under the cover of border training exercises, amidst a global pandemic and despite a number of existing bilateral agreements for maintaining the status quo along the LAC. China’s Defense Ministry has also justified activities on disputed islands in the Indo-Pacific region citing provocative actions by the United States in the region. It has argued that China has engaged in massive construction and land reclamation activities on the disputed islands immediately after other countries involved in the dispute like Vietnam, the Philippines and Malaysia had engaged in similar activities but on a much smaller scale. China is also attempting to increase its influence in regions like Africa on important domains such as gender, internet governance, refugees, peacekeeping, which is where it perceives a vacuum has been created by a withdrawal of the United States and/or an absence in global governance.