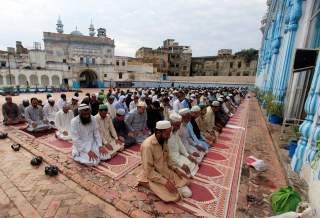 With the rise of Barelvi, a sub-sect of Sunni Hanafi Islam, extremist groups in Pakistan, the country’s drift into extremism comes full circle. Apparently, considered to be more tolerant and accommodative of other faiths and sects, the Barelvi groups in Pakistan have been asserting themselves politically since the 2016 hanging of Mumtaz Qadri, who was the self-righteous assassin of former Punjab governor Salman Taseeer.

The recent wave of protests by the Barelvi extremist group, Tehreek-e-Labbaik Ya Rasool Allah (TLYR), was triggered by government's decision to amend country’s electoral laws to abolish the separate electoral rule for the heterodox Ahmadiyya community. The protests in the capital Islamabad ended after an agreement was struck between the government and TLYR, which resulted in the resignation of law minister Zaid Hmaid. This development marks a new low in Pakistan’s history of appeasing its religious-political groups. The state and society have paid an astronomical price in blood and treasure for this appeasement. Yet, the folly continues.

Four broad arguments provide insights into decisionmaking of this nature. First, weak and unpopular governments appease religious groups for political survival. When governments struggle to maintain political legitimacy, provide security and deliver economically, then religious and ethnic groups become the alternative suppliers of social services and political action. These alternative actors are good at producing club-goods—both spiritual and material. Moreover, they provide a strong sense of cohesion and identity to their followers, so much so that group-loyalty surpasses state-loyalty. The followers from these groups form their own communal and sectarian boundaries, fragmenting the society along religious lines.

After losing its chief, Nawaz Sharif, to the Panama Papers inquiry, the Pakistan Muslim League-Nawaz (PML-N) government has been at its weakest. The Sharifs are facing graft probes by the National Accountability Bureau (NAB), Pakistan’s chief anti-corruption body. Regionally, the United States is breathing down Islamabad’s neck to do more to facilitate reconciliation in Afghanistan. Domestically, the judiciary has been pressuring the government over multiple issues, while the political opposition inside and outside the parliament is increasing.

Second, governments pander to religious groups if they have a vested interest. From the start, the PML-N viewed TLYR’s sit-in as a conspiracy against the party to deprive it of its Barelvi vote-bank ahead of the 2018 elections. To keep its Barelvi vote-bank intact, the PML-N government did not take any action against the protesters for twenty-one days, allowing them to fortify their position at Faizabad, gather stones and sticks, create their check posts and swell their numbers by the thousands. The court’s order to clear the Islamabad Highway finally compelled the government to respond.

Third, weak governments co-opt religious groups to shore up their political and ideological legitimacy. Pakistan has never had a stable political order. As a result, democracy as a system of governance could not take roots in the country, leaving successive civilian regimes vulnerable to popular dissent. Due to the trusted reputation of the religious groups in Pakistan, their co-option has been a source of ideological legitimacy for civilian governments.

Fourth, confessional nation-states whose national philosophy is constructed along religious lines find it difficult to reform laws and policies that involve religion. They must grapple with the fierce opposition of religious-political groups inside and outside the parliament. Proposed amendments to such laws and policies are viewed as a disservice to Islam. The pressure groups employ the “Islam in danger” narrative to push back against the government and deter legal reforms concerning religious issues.

Notwithstanding the theological merits and demerits, the Faizabad sit-in and the government’s response are disturbing on several levels. First, the TLY supremo Rizvi has been successful in bringing TLY from the margins to the centre-stage, turning a new chapter in Pakistan's Islamization. He has politicised the Barelvi identity along narrow sub-sectarian lines using the Khatam-e-Nabuwat (Finality of the Prophethood) narrative. TLY is a by-product of political turbulence and rapid social transformations in Pakistan

During the Faizabad sit-in, the TLY’s speeches, statements and social-media campaigns have sharply criticised the Ahmadiyya community and the rival Sunni sub-sect, the Deobandis. The Ahmadis are to TLY what the Shias are to the Sipah-e-Sahaba Pakistan. Therefore, TLY is not only creating a contradistinction for its Barelvi brand of Islamism, but it is also outbidding the rival Deobandi sub-sect.

Barelvis constitute the largest portion of Sunni Muslims in Pakistan. Historically, the Barelvi faith, which identifies with Sufism, has been accommodative, tolerant and not particularly authoritarian about its religiosity. This has allowed the group to maintain good relations with other Islamic sects and faiths. Arguably, these dynamics can change when the majority faith feels insecure due to some self-imagined and perceived threat. This can result in self-destruction, intellectual stagnation, religious and new divisions. The Rizvi-Jalai split within TLY is a case in point.

The most disturbing trend emanating from the Faizabad sit-in is the weaponization of speech and fatwa. The intolerance in discussions involving religious matters, particularly differences of opinion, has become borderline in public and social-media discourses. In such a hostile environment, it is difficult to hold rational debates on religious matters because discussions turn into polemics devoid of substance and nuance. Differing opinions and disagreement with the majority’s beliefs can result in the dissenter being branded as an apostate or non-believer.

Finally, religious politics in Pakistan has moved away from pan-Islamism to narrow sectarianism with the entry of new religious-political groups. When new religious groups enter into activism, they interact with public and political life in several ways. Some of them become socially and politically controversial while others attain some level of recognition. At times, they push the boundaries of the system and refuse to conform to laws that they believe infringe their liberty.

The newly established political groupings such as Rah-e-Haq party (a political front of Ahle Sunnat Wal Jamat, a sectarian group), Majlis Wahdat-e-Muslimeen and TLY are shrinking the support base of Pakistan’s mainstream religious-political parties. These outfits are gaining traction among their followers. This may not be fully reflected in upcoming elections but their social and religious clout cannot be underestimated. Their influence creates and recreates sectarian identities and political agendas with the changing circumstances.

The appeasement of the religious-right has catastrophic effects on Pakistan’s social ethos and religious landscape. It has emboldened radical groups to expand their space in the society. If Pakistan does not improve its governance credentials, service delivery and democratic institutionalization, then it will remain hostage to such extra-parliamentary pressures.

Abdul Basit is an associate research fellow at the S. Rajaratnam School of International Studies, Singapore. He tweets at @basitresearcher.