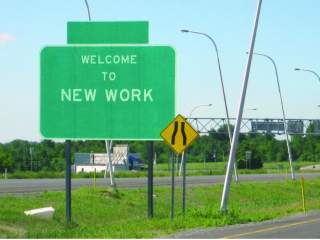 The Homestead Act of 1862 is one of America’s best-known and beloved laws. By giving away federal land for free to anyone who settled and cultivated it, the act enshrined the governing principle of the newly ascendant Republican Party: government should act to help the average man help himself build a better life. Together with the Land Grant College Act and the Pacific Railroad Acts, the Homestead Act placed the federal government squarely on the side of the average American in his or her quest to live in comfort and with dignity.

Today we have no frontier, no untapped source of federal lands. We do, however, have the same issue the Homestead Act tried to solve. Millions of low-to-moderately skilled, native-born and immigrant Americans live in places where they can’t find decent work while a vast new economic frontier unfolds in Southern and Western states such as Texas, Florida and North Carolina. These wide open spaces are enticing enough to encourage millions of Latin Americans to undertake dangerous and expensive journeys, yet millions of other Americans remain mired in ghettoes, depressed steel towns and struggling regions like Appalachia and the Mississippi Delta.

This is a perplexing and serious problem. Why don’t Americans who live in depressed areas move to places where they can start new lives and get back on their feet? One main reason is the nature of the modern American welfare state. Most welfare-state programs are awarded by states and localities. More crucially, their receipt is often tied to or complicated by continued residence in those places. Thus, for a person who has become dependent on Temporary Assistance for Needy Families (TANF) grants, food stamps, Section 8 housing vouchers and Medicaid, moving for potential work comes with great risk. It should come as no surprise that the people for whom moving would provide the greatest opportunity—those with little or no job skills who need to take the first step on the ladder of opportunity—are precisely those for whom the prospective loss of benefits or the difficulty in continuing them provides the greatest barrier to their deciding to risk moving at all.

Many Republicans concerned with entrenched poverty, such as Speaker of the House Paul Ryan and Senator Marco Rubio, propose turning authority over these and many other federal anti-poverty programs to the states in block grants on the theory states are better placed to help get people on their feet. This approach, however, would likely only exacerbate this problem. Benefit receipt would become even more tied to locality than it is currently, giving people already averse to moving even more of a reason to stay put. Republicans who wish to tackle entrenched poverty need to look back to their future. The GOP should propose a new Homestead Act that reforms federal tax law, unemployment compensation, income-support efforts and welfare programs to encourage worker mobility.

The evidence of insufficient domestic migration is all around us. Texas, for example, has had robust job growth in recent years, adding 1.2 million jobs between July 2010 and July 2014. While some Americans did move to Texas during this time—about 533,000—every indication is that the state could have supported even more. Texas’ unemployment rate remains well below the national average, and well below the rates of nearby states. Indeed, while the standard deviation of unemployment rates across the fifty U.S. states has trended down in recent decades, it has not fallen nearly as much as one would expect in a country where the movement of information and people has never been easier. Instead, millions of able-bodied, working-aged Americans are staying in low-growth or declining areas. These “job deserts” are well known to most observers—Appalachia, parts of the Rural South and Midwest, aging towns and cities in America’s Rust Belt.

A few hundred miles east of Texas on I-20 is Mississippi, where job growth has been anemic for years. The state lost about eleven thousand jobs between July 2005 and July 2014, and the Magnolia State’s employment wasn’t rosy in 2005, either. At 61.9 percent, Mississippi had one of the nation’s lowest labor-force participation rates (LFPR—the measure of how many adults sixteen years of age and older are looking for work). It also had one of the highest unemployment rates at 7.4 percent. Despite this relatively bleak outlook, outmigration from Mississippi was only a fraction of what one might expect. Only twenty-five thousand people—roughly equal to a single suburb of the state’s capital, Jackson—left Mississippi during the July 2010–July 2014 period. Rather than look for work elsewhere, tens of thousands of Mississippians stayed put. The result: even lower labor force participation rates (55.2 percent in May 2015) and continued high unemployment (6.7 percent) as people look for jobs that will never come.

Michigan, meanwhile, has not been as structurally depressed as Mississippi, but the severe decline in the auto industry hurt the state deeply. Despite the industry’s comeback, Michigan still has about 120,000 fewer jobs today than it had in mid-2005. Michiganders have moved from the state, but not as many as one would expect given the state’s steep decline in jobs. Like Mississippi, Michigan’s lack of migration is exhibited by a low LFPR. In 2005, Michigan had a 65.8 percent LFPR, only slightly lower than the nation’s 66.1 percent. In May 2015, however, Michigan’s LFPR had dropped to 60.3, while the nation’s had only dropped to 62.9 percent. Michigan had gone from an LFPR only 0.3 percent below the nation’s to an LFPR 2.6 percent lower. That 2.3 percent difference matters: it means that 157,000 adults who used to look for work had stopped—and that’s after over 150,000 Michigan residents had already left the state.

Some of the nation’s decline in labor-force participation is due to the aging of the Baby Boomers. As they began to reach retirement age, it was natural that LFPR—which does not exclude older Americans from its calculations—would decline. But there’s no reason to think that most job deserts are aging any faster than the rest of America. Michigan’s rapid decline in LFPR is not due to older retirees “aging in place.” It’s primarily due to adults dropping out of the work force entirely. The case of the long-standing job deserts is even more difficult to explain by aging in place. Large parts of America have exhibited low LFPRs and low job growth for decades, yet working-aged Americans still stay in place rather than move in search of work.

In prior eras, consistently poor growth rates or sudden, catastrophic declines in jobs would have spawned mass migration. In the face of the Dust Bowl of the 1930s, for example, tens of thousands of Okies and Arkies left their barren home states for the relatively fertile job soil of California, as movingly described in John Steinbeck’s The Grapes of Wrath. Today, however, the modern welfare state permits many people to just get by on various forms of benefits and part-time work, inadvertently encouraging people to stay put rather than move in search of work.

This becomes obvious when you overlay county-level maps of receipt of means-tested benefits with maps showing LFPR. U.S. counties dominated by large, older cities such as Baltimore, Milwaukee, Philadelphia, Detroit, New York and St. Louis are high recipients of “income support” benefits, including food stamps, disability payments and the earned-income tax credit (EITC). According to a map of county-level LFPRs in 2010, the counties containing these large cities had LFPRs ranging from 49.4 percent (the Bronx) to 56.6 percent (Milwaukee). These totals are much lower than the national 2010 LFPR of 64.6 percent.

As dreary as these totals are, they are a genuine beacon of light compared to those in Appalachia and the rural South, areas which also exhibit very high rates of income-support-benefit receipt and lower LFPRs. The whole state of West Virginia, for example, had an LFPR of 54.7 percent in July 2010. Many counties had LFPRs below 40 percent, or nearly ten percent lower than the worst urban county. These counties invariably also receive high shares of personal income from government income-support benefits. Jefferson County, an African-American county in the Mississippi Delta, received over 9 percent of its total personal income just from income-support benefits: its LFPR was a dismal 37.1 percent.

Even these LFPR measures surely mask the dire conditions many Americans face. Many people in these counties work part-time or find sporadic, seasonal work and make do with income-support benefits that top off what they can earn in the private sector. Food stamps (now called the Supplemental Nutrition Assistance Program [SNAP]) and the EITC are two ways that low-wage, part-time work in job deserts are made bearable enough to convince people to stay put. One could look at these data and conclude, as demographer Nicholas Eberstadt did, that America is becoming a “nation of takers.” His analysis criticizes the entire welfare-state structure built over the past eight decades and argues for at minimum a substantial pruning back of the edifice, if not its demise.

I disagree. The problem is not the fact of the availability of government benefits. We have rightfully decided that Americans ought not to live forever in poverty, mired in hopelessness and despair. Any agenda that seeks to repeal this consensus is both politically impossible and, more importantly, unjust. Standard conservative welfare-state reforms, however, are also not likely to significantly alleviate these problems. Extending TANF’s work requirement to the whole panoply of means-tested benefits, as the Heritage Foundation’s Robert Rector urges, would likely simply shift some people from nonwork into subsidized, low-wage work. That surely is better for the recipient’s character and as an example to children growing up in job deserts, but it does not place these people on the upward ladder of mobility because few of these ladders are being built in those deserts.