A New Look at the Immigration Debate 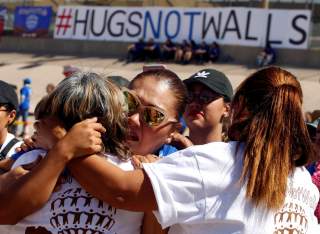 Calls for unrestricted immigration, for abolishing ICE (Immigration and Customs Enforcement), and for the granting of amnesty and even voting rights to illegal immigrants are most often heard from Democrats, “progressives,” “liberals,” and socialists.

These “open borders” advocates often respond to any opposition by decrying it as motivated by racism, and advocates of open borders on the Left—whose derangement in the face of President Donald Trump’s successes have sparked a conversation among them about how they should now “fight dirty”—are not secretive about their desire to import malleable, new, voters who will outnumber the native born American voters who have recently taken over one thousand state and local offices away from the Democratic Party. Nor do people on the Left always hide their desire to punish Americans—for producing too much wealth, using too much energy, for allegedly causing the wars (or poverty) that lead illegal immigrants to flee their home countries.

It’s not that you cannot easily find a libertarian who will accuse you of bigotry when you repeat Milton Friedman’s observation that it is untenable to have both totally free immigration and a welfare state, since the impoverished billions of the world would simply move to the wealthiest countries they could enter and consume everything its citizens managed to produce. You can also easily find libertarians who will assert, oddly one would think for a libertarian, that U.S. citizens deserve to be subjected to competition from illegal immigrants for jobs, education, and housing, and forced to pay taxes to fund both the relocation of and social services for immigrants, because the U.S. government or foreign-policy establishment made their countries of origin violent and inhospitable.

But the major libertarian advocates of open borders—George Mason University economist Bryan Caplan, CATO Institute policy analyst Alex Nowrasteh, and Reason Foundation policy analyst Shikha Sood Dalmia—tend to “go high” when making their case(s), at least as compared to Democrat Party flaks arguing for amnesty, abolishing ICE, etc. Their goal is a world with free immigration for all, where every individual is, as libertarians wish to have it, the owner of his or her own body, life, time, and work, and may work where she wishes, go to school where he likes, support or not whichever union, church, or business she prefers, move to whatever state or city he chooses, and live in whatever country she desires. (Though they rarely argue for or are concerned with reciprocity, where a U.S. citizen could easily move to or work in other countries.) These libertarians would like to have the immigration policy the United States had in 1776. “Progressive” open borders advocates often quote the poem of socialist Emma Lazarus that was added to the Statue of Liberty, about how America accepts the tired, the poor, and the huddled masses of the world. Libertarians look to the actual Statue, and view freedom of movement as part of individual freedom, and not primarily a social service benefit for refugees from poverty and war.

Besides the moral case—that all individuals have a right to freedom of movement—the libertarians also of course make the free market argument about the gains of (international) trade. Just as allowing U.S. companies to import cheap Canadian lumber without tariffs allows U.S. consumers to have cheaper furniture and housing, and may even create more U.S. jobs in producing furniture, in construction, in making paper products, etc. than are lost in American lumber yards, allowing the U.S. economy to “import” cheap labor from south of the border allows at least some Americans to have cheaper landscaping, gardening, chicken processing, cleaning, and construction, and might create more jobs—say in managing or accounting at Perdue—in the businesses that use this cheap labor than the low wage American jobs lost. Dalmia in a 2012 survey of policy studies reported that economists’ estimates of the increase in U.S. GDP produced by immigrant labor was between $6 billion and $22 billion. And Dalmia quotes Professor Caplan on how immigrant labor overall increases or has no effect on American wages, though it does specifically lower the wages of less skilled and less educated American workers.

The fact that immigrant labor impacts different Americans differently illustrates the granularity of the impact immigration has in the economy. In her survey Dalmia claims immigrants tend to move to states that do not have extensive welfare programs, minimizing the impact of immigrants on the taxpayer. One could easily rephrase this, and ask a question about how libertarians (including Libertarians) can appeal to voters: Why should working and middle class people in rural counties, the people who gave their Electoral College votes to Donald Trump and not Hillary Clinton (or Gary Johnson), be happy to vote for people supporting unrestricted immigration or amnesty for illegal immigrants, when these Americans have worked their whole lives to pay off mortgages to own a middle class home, a home which is now subjected to property taxes to pay for the day care (or warehousing) of illegal immigrant children (and the American born children of illegal immigrants), which is necessary for those immigrant workers to be able to take jobs in the local chicken processing plant?

Libertarian responses to this question have been deficient. On social media, rank-and-file libertarians tend to argue that immigrants, even illegal immigrants, pay taxes too, even if just through their rent to their property tax paying landlords. The average annual per child cost of an American public school is $12,000, though it can be as high as $29,000 in Washington, DC, New York City, and other jurisdictions. The idea that many immigrants—especially illegal immigrants, living crowded into low value, low tax assessment properties—pay anything like $12,000 annually in property (or other) taxes per child they warehouse in the local public school, as they must in order to be able to take a job, is prima facie ridiculous. (Rank-and-file libertarians often go further into absurdity, arguing that many Americans never pay enough in taxes to cover the cost of the public schooling of their children—Dalmia says middle-class people probably don’t pay enough to cover the cost of three children so enrolled—so that if one opposes unrestricted immigration one must also believe in deporting underperforming Americans.) Slightly over one fourth of the children in the United States are now either immigrants or the children of immigrants. Since the total expenditures on public schooling in the United States. is almost $700 billion, one fourth of this cost is far greater than the GDP gains cited by Dalmia, and also greater than the $50 billion price she cites for building and maintaining a wall on the U.S. Mexican border. (It is also greater than the $104 billion spent on food stamps, the $46 billion spent Section 8 and other housing programs, or the $30 billion spent on Aid to Families with Dependent Children (and related programs) for all American residents, citizen or non-citizen.)

Of course immigrants also use other taxpayer-funded social services, but public education for all children residing in the United States is mandatory. (In eighteenth and nineteenth century America, with open borders immigration policies libertarians favor, immigrant children were not legally excluded from the labor market or mandated a taxpayer supported public education.) The libertarian CATO Institute regularly publishes on the welfare costs of immigrants, but in this area above all others its studies seem deeply flawed, claiming that immigrants use fewer social services than do native born Americans, a claim made in some cases by excluding public education from the accounting, or by including entitlements like Social Security and Medicare. One CATO analyst, Daniel Griswold, makes a hand-waving argument that government spending on educating immigrant children is acceptable, since it pays for itself in their future productivity. Besides not sounding very libertarian—the government centrally planning investment in (human) capital—Griswold assumes that the billions spent educating immigrant children and making them more productive would not increase productivity as much or more if they were instead used to provide American children with smaller class sizes or after-school programs, or with capital investments in more advanced tools at their future jobs, etc.

A better libertarian immigration policy would do what libertarians are supposed to believe in: protecting Americans from being subjected to force and fraud, to robbery and expropriation. The United States is currently a welfare state. Anyone in the United States who is a net-tax consumer activates the government apparatus that has a gun aimed at and a jail cell (or a lien, fines, interest and penalties) waiting for every American who is a net taxpayer. The fact that we already have a population in which roughly half of American citizens are net tax consumers does not in any way justify imposing even more exploitation of individuals who are net tax payers by importing in tens or hundreds of millions of unskilled and impoverished people; indeed it makes it even more necessary to protect American taxpayers from more people exploiting them. (If churches, synagogues, mosques or other voluntary associations want to pay for refugees, immigrants, or would-be migrants, either here or abroad, that is fine.)