A New "Normal": Time for Japan to Defend Japan 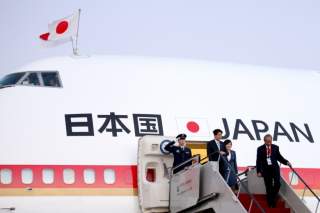 Prime Minister Shinzo Abe has begun to transform Japan into a “normal”l country. Tokyo plans to take a more active role internationally—which is good news for America. Indeed, Washington should insist that Tokyo eventually take over responsibility for defending itself and its territorial claims in the surrounding seas.

Many seemingly bright ideas sour quickly, causing one to regret them but once, and that is forever. Such is Article 9 of the Japanese constitution, imposed by America as military occupier after World War II. Washington quickly realized that Tokyo, like Germany, could play a positive military role.

But by then, Japanese officials preferred to hide behind their constitution. Tokyo saw little reason to revisit an extraordinarily good deal that left what became the world’s second largest economic power protected by its principal competitor. Japan then could focus on economic development.

In recent years, the United States has pushed Japan to do more militarily. A serious internal debate has been percolating at least since the early 1990s, especially after North Korea and China began reminding the Japanese that their land faced potential threats.

So far, Japanese officials have simply revised their interpretation of Article 9. Although it seems to ban any military, Japan deploys a “Self-Defense Force.” Over the years, the government has bent the provision to the breaking point, but never clearly violated the nation’s basic law.

Now the Abe government has issued another “reinterpretation.” However, Japan is not yet a normal country. The Prime Minister noted: “There is no change in the general principle that we cannot send troops overseas.”

Still, the SDF will be allowed to cooperate with other countries (most obviously America) that come to Japan’s defense. Tokyo also will be able to aid allies under attack and join peacekeeping operations in the name of “collective self-defense.” These are important steps forward, even though the change would be small for other nations. Yet the “reinterpretation” requires only cabinet and parliamentary approval, not constitutional revision.

The controversial move triggered public protests. One man set himself on fire in response. The Abe plan may have contributed to the ruling party’s election loss in a provincial governor’s race. The Diet must change numerous laws to implement the change, and Prime Minister Abe indicated that he planned to go slow: “Unfortunately, we cannot say that public is fully supportive.”

Overseas the response was mixed. The PRC predictably was unhappy. A government spokesman said: “China opposes the Japanese fabricating the China threat to promote its domestic political agenda.” The Republic of Korea explained it was “paying sharp attention to” the policy. Seoul also called on Japan to win its neighbors’ confidence and insisted that Japanese forces would have to be invited in for any “collective” mission.

Other nations—in a break from the past—were supportive. Australian Prime Minister Tony Abbott endorsed the move. So did the Philippines, which earlier welcomed Tokyo taking a more active military role in response to Beijing’s aggressive ocean maneuvers. Singapore also offered public support, while most ASEAN states and India were favorably inclined, if more private in their reactions. In fact, Japan recently announced that it was giving six ships to Vietnam for use in coast guard and fisheries operations.

The United States was pleased. Defense Secretary Chuck Hagel explained: “This decision is an important step for Japan as it seeks to make a greater contribution to regional and global peace and security.”

Some critics still worry about Tokyo’s ultimate intentions, as if the Japanese had a double dose of original sin. But everyone who planned the depredations of World War II is dead. There is no imperial generation planning a comeback. And those pushing a more aggressive stance seem mild compared to America’s war-happy neoconservatives. Nor does Japan, with a stagnant economy, middling (and declining) population and pacifist ethos, look much like the next global dominator.

Instead, Japan’s well-established desire to do nothing has run aground because the world looks ever-more dangerous. With the Chinese challenge only likely to grow, Tokyo needs to be able to match the PRC. Moreover, even though Washington has affirmed coverage of the “mutual” defense treaty (Japan’s responsibilities are essentially nil), America’s interest in which country controls various uninhabited rocks also is essentially nil. Exactly what the United States would do in a crisis is not so clear.

Moreover, basic economics suggests that Washington will have to reduce its role. As Prime Minister Abe recognized in 2012: “With the U.S. defense budget facing big cuts, a collapse of the military balance of power in Asia could create instability.” The underlying defense commitment itself will face increasing challenges. Stephen Harner, a former Foreign Service officer, wrote of “the possibility that the U.S. commitment to the alliance may one day be formally withdrawn or, more likely, may simply be recognized by all to be illusory, a fiction that dares not speak its name.”

Thus, though the new interpretation is an important advance, it is not nearly enough. Over time, Tokyo needs to do much more.

For almost seven decades, the United States has played the dominant role in protecting Japan. That was inevitable in the aftermath of World War II while American forces occupied the islands. It also made sense as Tokyo built a democratic political order and promoted economic recovery at home and faced intense skepticism and hostility abroad.

Those days are long over, however. Japan joined the globe’s economic front ranks decades ago. Democracy, while not perfect, is as firmly rooted in Japan as in other U.S. allies. Some of Tokyo’s neighbors may still doubt Japan’s trustworthiness, but this aging yet satiated nation isn’t about to embark on an aggressive rampage.

Instead of relying on America, Japan should defend itself, including contested territories under Tokyo’s administration. The United States has an interest in preserving Japan’s independent existence, but that suggests a backup role. The day-to-day business of advancing Tokyo’s international interests should fall on the Japanese government.

Moreover, Tokyo should promote regional security. There’s no reason for the United States alone to preserve open sea-lanes, especially those critical for Japanese commerce. Indeed, an island-state like Japan has a far greater interest than America does in preventing nearby waters from turning into a Chinese sea.

Tokyo should cooperate closely with other democratic nations in Asia, running from South Korea to India. On his recent visit to Australia, for instance, the Prime Minister handled the historical issue well. Japan also is building better relations with less democratic states that nevertheless share a desire to maintain a regional balance of power, such as Burma and Vietnam. In fact, Prime Minister Abe visited all ten ASEAN nations last year.

Of course, Japanese officials periodically undercut such efforts by ill-considered comments and actions. But if Tokyo was unable to rely on America, it would have to more carefully balance the domestic benefits of playing to the public gallery versus the international costs of doing so. America’s security commitment insulates Japan from the folly of its leaders visiting the Yasukuni Shrine, for instance.

Tokyo needs to spend more on its military. With outlays of only about 1 percent of GDP, Japan now fields a technologically advanced armed forces. Doubling that level—the formal objective for NATO, but still half America’s effort—would allow Tokyo to add missiles and missile defenses, as well as bolster its air and naval forces. Japan does not need a substantial army, which would raise the greatest concerns among its neighbors.

Tokyo’s objective should be to create armed forces sufficient to deter Beijing from acting precipitously and recklessly. China would have nothing to fear: even a Japanese-led coalition would be incapable of undertaking offensive action against the nuclear-armed PRC. Rather, Japan and other states would seek to do to China what China is seeking to do to America—deter adverse military action.

It is particularly important for Washington to tear up the perceived blank check that leaves a decision for war or peace with Tokyo. Backed by America, the Japanese government has less incentive to negotiate with the PRC over the Senkakus or anything else. Yet Japan is not ready for a military confrontation. This creates a dangerous dynamic.

If Tokyo still feels comfortable with its existing SDF, so be it. More likely, Japanese officials would be forced to debate their nation’s security objectives, potential threats and military requirements. The discussion would have to include the Japanese people. And Japan would need to consider a forthright revision of Article 9.