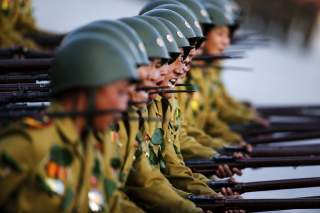 North Korea almost certainly will not attack the United States or its armed forces or its distant territories with conventional or nuclear weapons. The costs to Kim Jong-un and his country would be monstrous. Kim’s hyperbolic rhetoric is much more a message to the North Korean people than to Americans, and his hyperbolic language is like his father’s and grandfather’s, and means little. What is highly likely, however, is Kim selling nuclear technology to truly dangerous adversaries of the United States—some of which the United States will be less likely to deter.

U.S. allies who achieved the technical nuclear breakthrough (France is another example) received no help from the United States government (and neither did Israel). Now, North Korea has a nuclear capability. What comes next?

North Korea would neither launch a conventional or nuclear attack against the United States because that would conjure a massive retribution by America. But if North Korea has sold advanced military expertise to adversaries of the United States, then it would not hesitate to sell nuclear technology to build its military and keep Kim Jong-un in luxury.

Kim has been warned by Defense Secretary James Mattis (as other senior officials have done before him) that attacking Americans would mean the end of the Kim dynasty and the destruction of North Korea’s population. Supporting that terminal threat to North Korea, the People’s Republic of China has stated China would not defend North Korea if it started a war with the United States. Kim is deterred! The next problem for the United States is that Kim could market nuclear technology to religious-based terrorists (and other U.S. adversaries) who cannot be as easily deterred.

Kim may be a self-indulgent, determined survivor, but he is definitely not a suicide bomber. He simply sees nuclear weapons as the twenty-first century version of the nineteenth century’s Colt pistol of the Wild West—the “great equalizer” that allowed Barney Fife (Don Knotts) to stand tall confronting John Wayne. North Korea has a GDP that is equivalent to about 60 percent of Iceland and has a population that is more than fifty times the size of the country. Still, it is very much on people’s minds. North Korea’s nuclear proliferation will be a strategy to continue to support its feeble economy and provide all the luxuries Kim demands regardless of the economic and international sanctions the United States and others can apply.

For example, look at how Abdul Qadeer Khan became one of the wealthiest people in Pakistan by selling nuclear technology to others. We know North Korean leaders have capitalized (a very proper word here) by proliferating missile technology and other tools of war. Stopping Kim in this area will not be easy—it will take gifted use of all the tools of security strategy.

There are four such instruments: diplomacy, information, military and economics. In this case, the least useful of these four is the military. The most useful (and most difficult and demanding) is information. Under this banner is intelligence: to whom will Kim sell and who is trying to buy nuclear technology? Anyone who studies clandestine proliferation knows how long it took the United States to discover that Muammar el-Qaddafi was seeking nuclear weapons (as were other A. Q. Khan customers) and how long it took to force the Libyan tyrant to back down. Another subset of information is public diplomacy or propaganda—a necessary device to convince other states to join the nonproliferation effort.

Diplomacy is also essential but perhaps difficult today given that the current administration has placed too little value on international relations. Additionally, the current secretary of state has not properly filled indispensable billets when experts are needed in U.S. embassies around the globe so that they can exchange information with foreign leaders who have been approached by Kim.

Economics is a vital tool, too, with many applications. Sanctions are a crucial device working against North Korea’s interests and against the concerns of potential consumers. Opening U.S. markets to others may motivate foreign states yearning to attain nuclear status to think twice about their ambitions. The last instrument is the military, which has an abundant of implements to ensure victory regardless of the type of war facing the United States.

Does anyone believe the United States is prepared today to defeat Kim Jong-un’s efforts to proliferate nuclear weapons?

Dr. Alan Gropman is the Emeritus Professor of National Security Policy at National Defense University and an Adjunct Professor at George Mason. He accumulated four thousand flying hours mostly in the C-130 and had two combat tours in Vietnam.

Image: Soldiers shout slogans as they march past a stand with North Korean leader Kim Jong Un and other officials during the parade celebrating the 70th anniversary of the founding of the ruling Workers' Party of Korea, in Pyongyang October 10, 2015. REUTERS/Damir Sagolj/File Photo